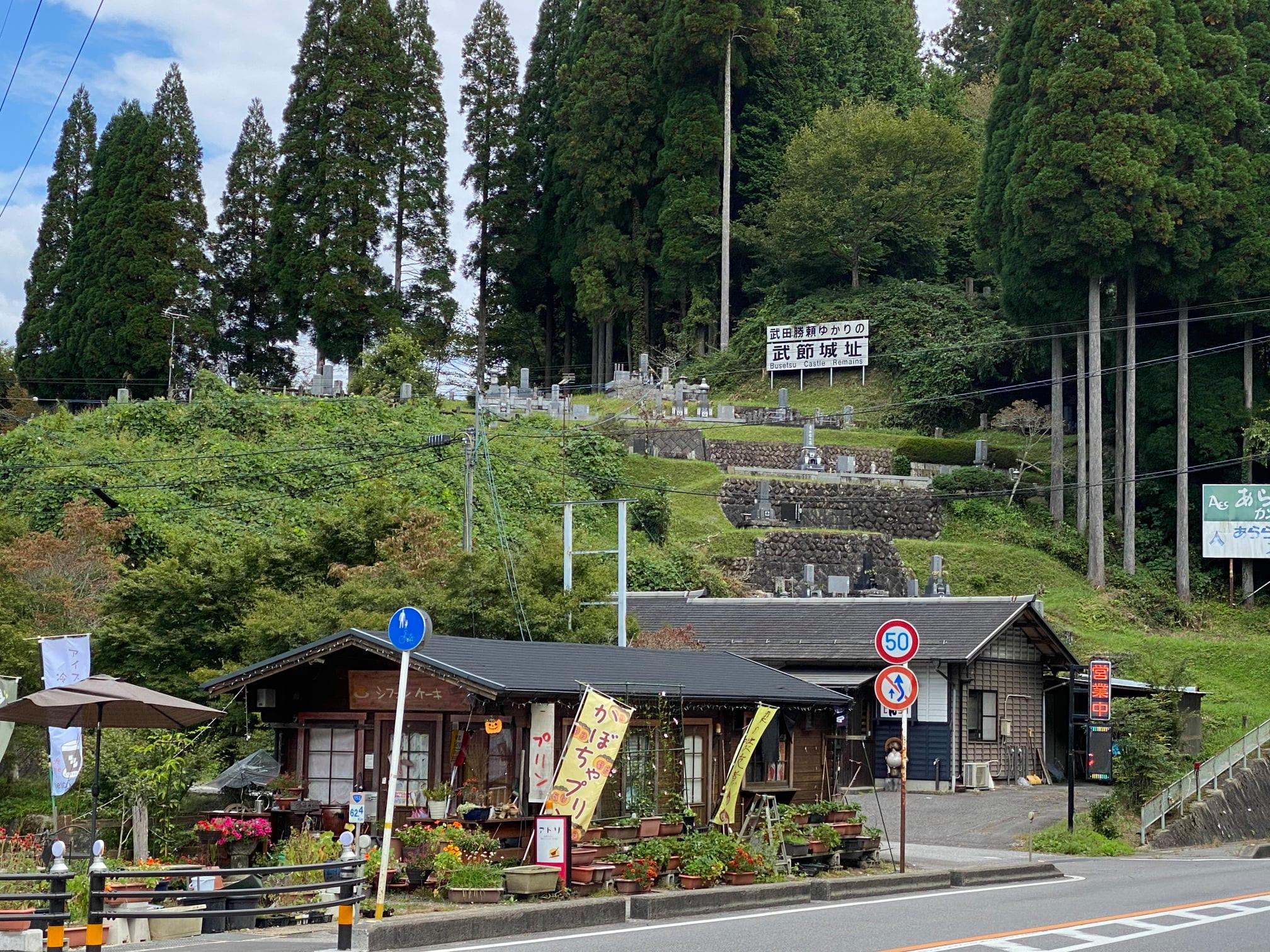 Busetsu was a small but prominent castle built circa 1504 – 1520 by Suganuma Sadanobu, lord of nearby Damine Castle on a 70m high hill in Inabu, modern-day north eastern Aichi Prefecture. Also known as Chifuku -Jo, Busetsu Castle lay on the border of Mikawa, Shinshu and Mino provinces, overlooking the important Chuma-Kaido highway, which branched off to the equally strategically important Iida-Kaido trade route. 450m north of the castle is the site of the Kamakura period (1185 -1333) Busetsu Ko-jo, or Old Busetsu Castle, built by the Nakura clan high on a mountain overlooking the present site.

Surrounded by Kawate Castle, Natsuyake Castle, Oshiyama Castle, Naka Castle, Noiri Castle and other fortificated mountaintops, Busetsu Castle was active for around 100 years and played an important role at the center of the information network, conveying enemy information via smoke signals.

In 1556, Shimojo Nobuuji of Shinshu (Nagano) attacked and brought down Busetsu after a fierce battle. During the Battle of Busetsu Valley, a princess of the castle fearing the invading forces committed suicide by jumping down a well, now known as Himedo (Princess Well).

Busetsu’s existence was of interest to the Takeda and the Tokugawa. In 1571, Takeda Shingen commenced a full-scale assault against Mikawa, leading an army of 25, 000 men from Iida southwards. Shocked at the numbers, Busetsu surrendered without fighting.

The Takeda then attacked Asuke and Kameyama castles before Noda Castle in Shinshiro, in 1573, where Shingen was shot by a sniper. Tokugawa Ieyasu’s eldest son, Matsudaira (Tokugawa) Nobuyasu fought his first battle aged 14 at the attack on Busetsu in 1573 in an attempt to win back the fortress.

Busetsu is next mentioned in history books and the Shincho-koki, the Chronicles of Lord Oda Nobunaga in 1575, after the late Takeda Shingen’s son, Takeda Katsuyori had attacked and taken Ena Akechi Castle, then attacked and captured another 18 castles before arriving at Nagashino, where the great gun battle took place. The battle against the joint Oda and Tokugawa forces served Katsuyori the greatest loss in Takeda clan history.

On May 21, 1575, the master of Damine Castle, Suganuma Sadatada, who had served with Takeda Katsuyori during the siege of Nagashino and subsequent battle, fled from Nagashino with the defeated Lord Takeda Katsuyori, having offered him refuge at Sadatada’s Damine Castle. Upon their arrival, they discovered that Sadatada’s uncle, Suganuma Sadanao, supported by clan vassal Imaizumi Dozen had defected to the Oda clan, and shut the gates on Sadatada and Katsuyori, denying them entry. As it was evening, and very dark in the middle of the mountains, they sought refuge in a nearby taka koya, a hawk coop, overnight. The next morning an 18 year-old samurai named Kihachiro led their escape across Mt. Dando to Busetsu Castle, about 20km away.

When they arrived at Busetsu Castle, the garrison had been reduced to support the Takeda at Nagashino, and the remaining handful of defenders were more than surprised to have Lord Katsuyori and Lord Sadatada suddenly turn up on their doorstep on the evening of May 22. Not having much to give them, Lord Katsuyori was offered warm Umezu, plum juice and vinegar tea, which he greatly appreciated, and (the beverage) has since remained a popular refreshment in the region. After a night in the castle’s honmaru, Katsuyori continued his escape to Shinano the next morning.

With the defeat of the Takeda, Busetsu came under Tokugawa control until 1590 when Tokugawa Ieyasu transferred to Edo (Tokyo) in the Kanto area. Busetsu was abandoned just after the Battle of Sekigahara in 1600.

Busetsu is a hirayama-jo, a mountain and flat-land castle, well situated on a hill overlooking the Busetsu Valley on the delta of the Kuroda River to the north and the Nagura River to the east acting as natural moats. The old Bukeyashiki, warrior residences were located in an area directly north east of the castle, with Chuma Kaido running between the samurai homes. The castles’ main gate, the Daimon, was to north east. The lower areas directly west of the castle was marsh land adding to the fortresses’ protection.

The castle ruins descend like steps with the Honmaru, Ninomaru and Sannomaru constructed one below the other in a line, forming a Renkakushiki formation. This suggests a weak formation, as the important Honmaru baily is exposed on three sides, however the area is surrounded by numerous kuruwa baileys affording adequate protection. Busetsu has 16 main baileys, and over 30 smaller baileys. A swordsmith forgery was located on the site of one of the lower baileys.

The amount of earthworks and the quality of the early 16th century manual labor is amazing. Having large numbers of baileys carved into the hillside means lots of kirigishi, artificially created cliffs and steep slopes. A large Karabori, dry moat, winds its way through the site, linked to smaller dry moats carved into the hill itself. These remain in form from over 500 years ago! The site of the monomidai tower and noroshi smoke signal tower above the Honmaru now houses a small shrine. The Honmaru bailey is vacant, but is used as the shrine’s carpark. The Ninomaru bailey is also vacant, but the San-no-maru is now a vegetable garden. One of the larger baileys has long been used as graveyard, another as a gate-ball field. Others are gardens and even private housing on the castle site. Most are now overgrown with trees and bamboo.

The site hasn’t been maintained very well, and although a road has been built leading to the Honmaru, although it does not follow the original path in and out of the castle. It is thought the original route led from the Jokamachi, castle town below, to the lower corner of the San-no-maru bailey.

The castle has not yet undergone any research excavations, and one of the reasons is because it is dubious much would be revealed. The Honmaru and Ninomaru are now vacant, but during WWII were used as potato growing fields, which appears to have been the reason for the important soseki building foundation base stones having been dug up and removed. I discovered piles of large stones, which appear to be both soseki foundation stones and possibly roof weighting stones in the Ni-no-maru bailey. On March 30, 1984, the ruins of Busetsu Castle were designated as a Toyota City (former Inabu Town) Historic Site, along with nearby Busetsu Kojo.

Retrieved from "http://jcastle.info/smw2021/index.php?title=Busetsu_Castle&oldid=51276"
Category:
This page was last edited on 4 February 2022, at 21:49.
Content is available under Creative Commons Attribution-NonCommercial-ShareAlike unless otherwise noted.
About Jcastle.info
Contact Jcastle.info