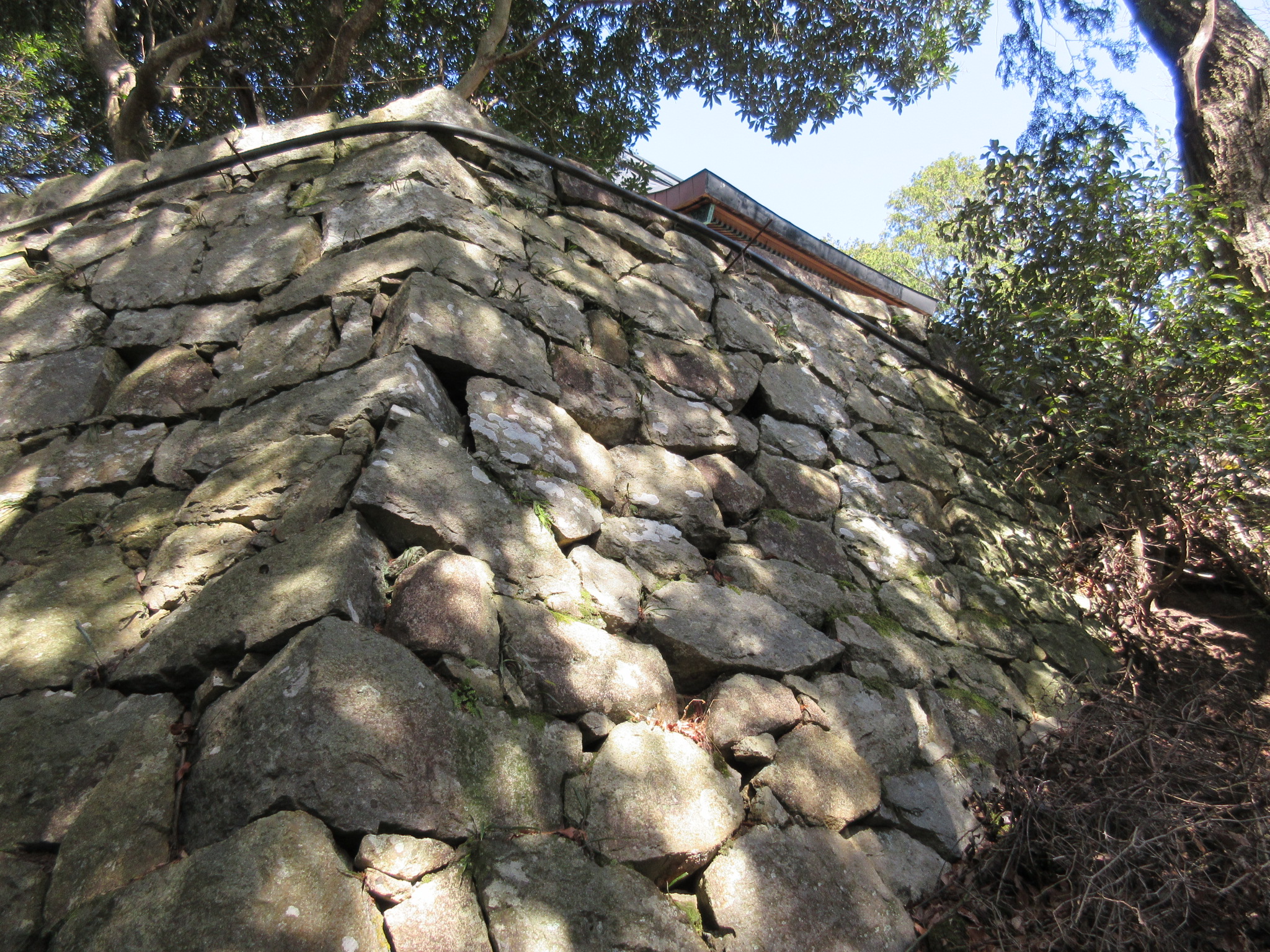 The history of Ishibayamajō is largely unknown, but it may be closely linked to that of the shrine which we now see on site today, accessed from Ishibaji via a long stone stairway (the castle was likely accessed from the east then). The shrine is called Amemiyaryū-jinja. It has a gate and stone retaining walls. The causeway to the shrine is along a flat ridge which was likely used as a fortified encampment by the castle's defenders. The shrine's godhouse sits in what was the castle's main bailey.

There is a story about Ishibaji and Oda Nobunaga. It's not known for certain if Kannonjijō and surrounding forts continued to be used by Nobunaga after the construction of Aźuchijō, but it's an interesting story so I'll briefly present it here. A travelling monk who called himself Mube ('No Place') was staying at Ishibaji, which was under Sazaibō ('Turban Shell Monk'). Many people came to bestow gifts upon him since it was said that he had magical abilities due to his austerities and training. Oda Nobunaga heard of the commotion and summoned this Mube. He confronted him in the stables of Aźuchijō, taking him by surprise. Nobunaga asked the monk where he was from. He replied 'no place'. Nobunaga asked him if he was from China or a Jesuit. Mube simply replied that he was a shūgyōsha. Nobunaga wasn't having it and said that if he wasn't from one of the three kingdoms then he must be heretical and should be burned at the stake.

Mube's composure was shattered and he confessed that he was from Haguro in Dewa. And Nobunaga said: "You are just a simple traveller. You claim that you have no birth place and no place to live, and that you do not accept gifts from others because you only wish to spread the Dharma, and so that your staying at Ishibaji is selfless. But are you really living with austerities if you keep returning to Ishibaji and living easily? I have heard, however, that you possess extraordinary power. Show me then your power here."

But Mube could not summon any power. Nobunaga saw this as confirmation of his suspicions and said: "A person with such mysterious power has a mien and eyes which are superior to all others, but you are just a travelling monk who stays at inns for free. You are no better than a mountain vagrant. In truth all you have done is to cheat people out of the wealth of their land with your outlandish claims. This is a great perversity."

Nobunaga had the monk cut his hair with scissors (for he had hair like a layman). He then had him stripped naked and a rope tied around him. Mube from Dewa was banished from the castle and was compelled to walk about the town in that state of humiliation. Nobunaga interviewed Sazaibō, asking how he could recieve such a disreputable vagabond at his temple. Sazaibō (played it cool and) said he had hired him to fix a leak in the temple's roof and to collect alms for the temple. Nobunaga was satisfied with Sazaibō's explanation.

Ishibayamajō's ruins are said to include the shukuruwa (main bailey), higashi-kuruwa (east bailey), unejō-tatebori (climbing moats in parallel strips), a northern bailey, obikuruwa (encircling bailey beneath another bailey) and other features. All this sounds pretty impressive but the site is now that of a shrine and I found it difficult to parse the castle ruins and the shrine precincts. I got terribly distracted with the ishigaki (stone walls) I found but these were built for the shrine, likely long after the fort was defunct. Beneath the castle site, which is on the mountain ridge between Sasōjō and Kannonjijō, to the east, is Ishibaji, a storied temple.

Ishibayamajō's shukuruwa is now the site of Amemiyaryū-jinja. Beneath the shukuruwa is extensive terracing in circular fashion. The tier of terracing between the shrine's godhouse and gate forms an obikuruwa which goes almost all the way around the shukuruwa. Beneath here are several more bands of terracing, and beneath the terracing are many tatebori (climbing moats). The long, lower bailey which follows the ridge has several trenches on either side, but these are hard to make out. I also noted a small peak at the opposite end of the ridge from the shukuruwa had been flattened, and so maybe this was a bailey or look-out platform.

Retrieved from "http://jcastle.info/smw2021/index.php?title=Kanzaki_Ishibayama_Castle&oldid=53851"
Category:
This page was last edited on 22 June 2022, at 15:42.
Content is available under Creative Commons Attribution-NonCommercial-ShareAlike unless otherwise noted.
About Jcastle.info
Contact Jcastle.info