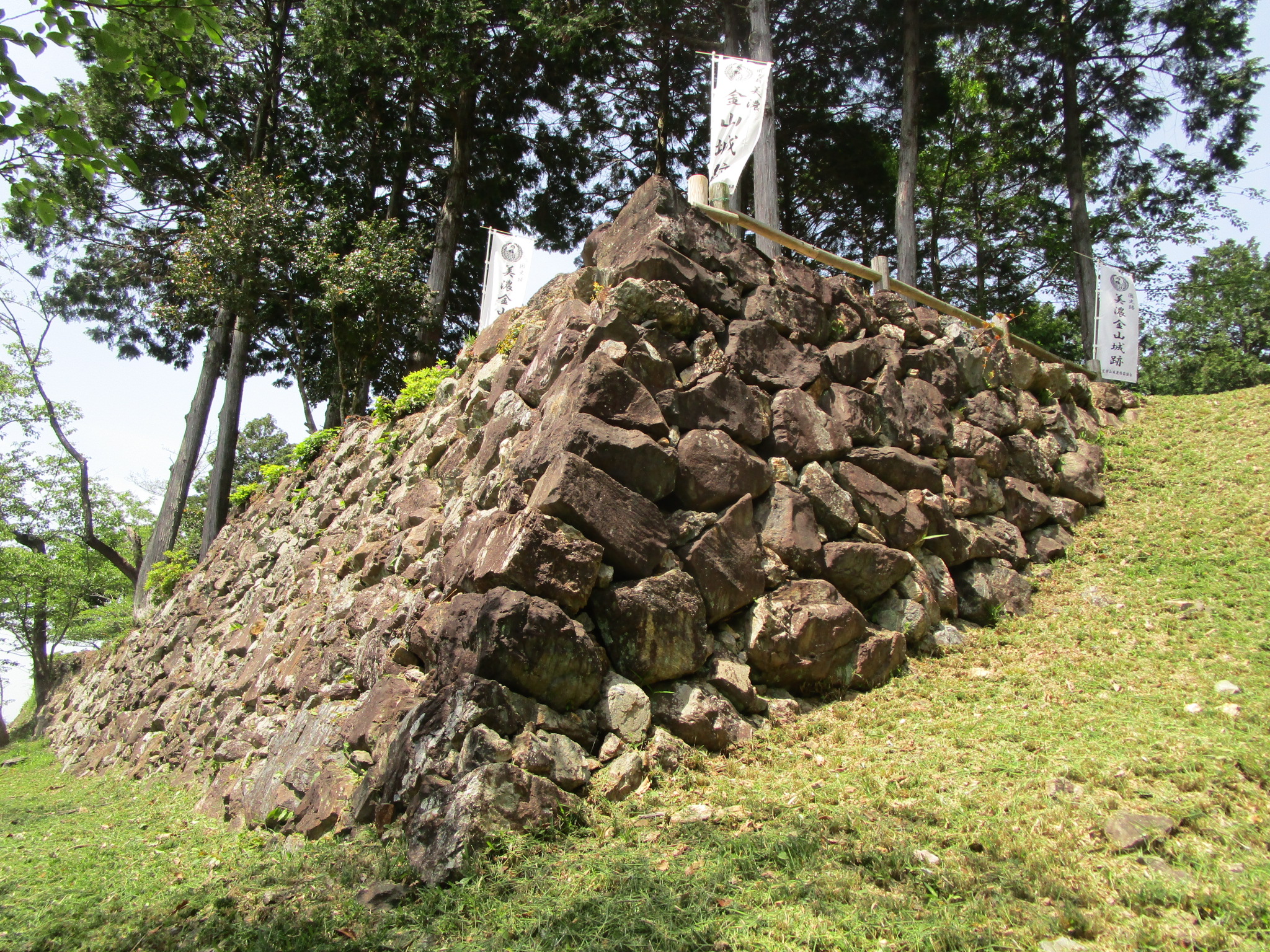 The first iteration of Kaneyamajō was built by Saitō Masayoshi, adopted son of Saitō Dōsan (his biological father was Konoe Taneie), in 1537. Lord of nearby Kukuri Castle, Toki Eigoro, killed Lord Masayoshi in 1548, however, leading to Kaneyamajō being temporarily abandoned. Mori Yoshinari was given command of Kaneyamajō in 1565 by Oda Nobunaga. Lord Yoshinari rebuilt the castle, and the name Kaneyamajō, then written 兼山, is thought not to have actually been used until this time, as before it had been called Karasuminejō (烏峰城, "Crow Peak Castle"). Lord Yoshinari died in battle in 1570, and Kaneyamajō was taken over by his son, Mori Nagayoshi. Mori Nagayoshi was twelve years old at that time. Apparently he was a real movie villain, and would regularly kill his own men. Later acquiring the nickname "Demon", I suppose that makes sense for someone who had been a warlord since they were twelve. The castle was expanded during young Nagayoshi's lordship. Mori Nagayoshi cemented his ties with Oda Nobunaga by handing over his younger brother, Mori Ranmaru, to serve Nobunaga as a pageboy. Ranmaru quickly became Nobunaga's favourite (to say no more!).

Lord Mori Nagayoshi would favour Toyotomi Hideyoshi over Oda Nobukatsu following the death of Oda Nobunaga and Ranmaru. Kaneyamajō was fortified further in anticipation of the impending conflicts, especially because Nagayoshi feared an attack by Tokugawa Ieyasu from Mikawa. Along with Ikeda Tsuneoki, Lord Nagayoshi attacked and captured Inuyama Castle in Owari. However, Lord Nagayoshi was finally slain at the Battle of Komaki-Nagakute in 1584, bringing an end to his short and brutal warrior's life. Apparently before going into battle that fated day Lord Nagayoshi had made a will stipulating that his younger brother, Mori Tadamasa, was not to inherit lordship of Kaneyamajō. Toyotomi Hideyoshi saw otherwise and Tadamasa, Mori Yoshinari's sixth son, became lord of the castle, aged 14.

In the Edo Period the Mori Clan were transfered to Shinano and the Ishikawa Clan, based at Inuyamajō, acquired Kaneyamajō. They demolished the castle and used its materials to repair Inuyamajō. It is said that a gate used at Inuyamajō which now stands at Zuisenji, a temple in Inuyama, was originally relocated from Kaneyamajō. It was also formerly believed that Inuyamajō's tenshu (main keep) was also transferred from Kaneyamajō, but this theory is now considered incorrect. The model of Kaneyamajō at the Sengoku Yamajiro Museum shows it with a tenshu which looks very alike Inuyamajō's. In the town beneath the castle mount one of Kaneyamajō's rear gates survives at the temple Jōinji. At the foot of the mountain a kabukimon has been (tastelessly) erected, spanning a modern road.

Mino-Kaneyamajō is another fantastic site with the name Kaneyama / Kanayama. It's almost like that name is a pure gold... oh, wait... Kaneyamajō in Mino Province is an epic yamajiro (mountaintop castle) site featuring ishigaki (stone-piled ramparts), dorui (earthen ramparts), many kuruwa (baileys), masugata (box-shaped gate complexes) ruins and even a tenshudai (platform for a donjon). The most stalwart ishigaki segment is actually now found in the castle's demaru (projecting bailey), which is where the carpark is. Ishigaki remains are found throughout the site, indicating that much of the mountain citadel was formerly stone-clad.

Retrieved from "http://jcastle.info/smw2021/index.php?title=Mino_Kaneyama_Castle&oldid=47686"
Category:
This page was last edited on 17 May 2021, at 23:02.
Content is available under Creative Commons Attribution-NonCommercial-ShareAlike unless otherwise noted.
About Jcastle.info
Contact Jcastle.info