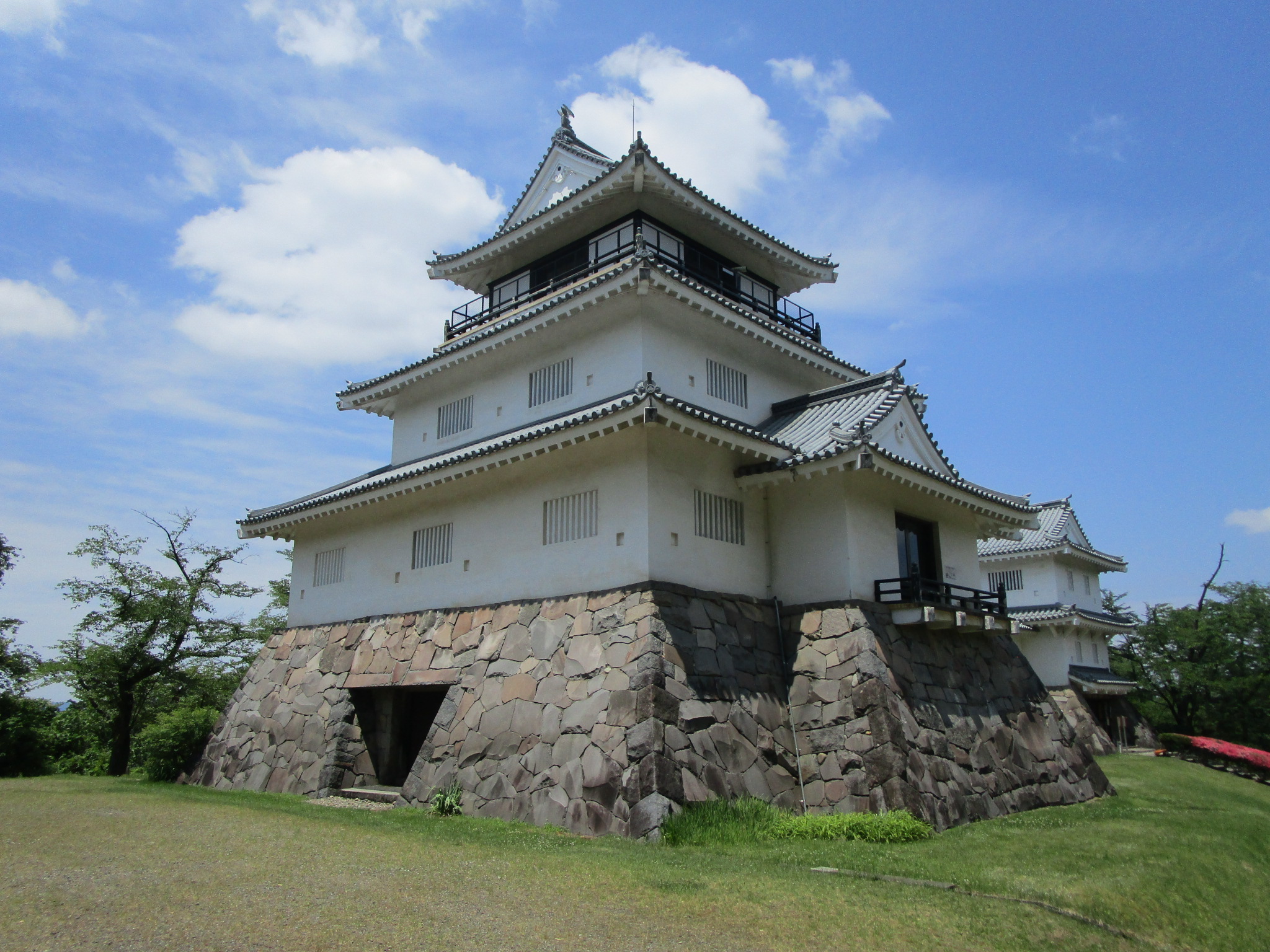 Nothing remains of Nagaokajō, but a donjon complex has been "reconstructed" off-site, putting it in the same category of mogi tenshu as Echizen-Katsuyamajō or even Fushimijō. First we went to this mogi tenshu which is located in Yūkyūzan Park (悠久山公園). The site is actually related to the castle via the Aoshi Shrine (蒼紫神社), established by the lords of Nagaoka Domain. It's a nice park. The mogi tenshu serves as a folk museum but it's been closed since the Wuhan Flu outbreak. It doesn't look too bad. The "ishigaki" the superstructure sits atop is clearly a concrete-glued mock-up, but, heck, I've seen worse. The donjon (called tenshukaku (天守閣)) features the usual modern mogi conceits, such as doors buried in the tenshudai (donjon platform), and a fairytale balcony. The donjon complex further includes a sub-keep (called "kaku-yagura (角櫓)") connected via a tamon-yagura (corridor turret, but called "hashiri-yagura (走り櫓)"), which actually reminded me of Aiźu-Wakamatsujō. Even though the stone blocks used in the "ishigaki" are obviously modern, the shadow of the rooftiles cast onto them, producing an optical illusion which made them look like they had been hewn traditionally. I inspected the actual castle site too, of course. The main bailey is now the site of Nagaoka Station, which is at the centre of a city, and, although there is a water feature and marker to commemorate the site, the former castle has been completely crushed under the modern city. I also found a marker to the castle's second bailey. So then I didn't make the mistake of not visiting the castle's actual site like I did the first time I visited Echizen Katsuyama Castle and Fushimi Castle.

Retrieved from "http://jcastle.info/smw2021/index.php?title=Nagaoka_Castle&oldid=48361"
Category:
This page was last edited on 13 June 2021, at 20:35.
Content is available under Creative Commons Attribution-NonCommercial-ShareAlike unless otherwise noted.
About Jcastle.info
Contact Jcastle.info