This is a new project to highlight the samurai homes (bukeyashiki 武家屋敷) you sometimes find near castles. I will also include ashigaru dwellings, even though ashigaru are technically not samurai (some domains included ashigaru in the samurai class). I'm starting with areas that I know well and residences where the house still exists. Many places noted as "samurai homes" on maps only have a single gate or storehouse remaining, but the main house is gone. I've documented many of these as well, but for the sake of bringing appropriate attention to these overlooked historical artifacts, I will first focus on residences where the house still exists.

Dwellings in the castle towns were highly regulated by the castle lord. All samurai kept their formal home near the castle. These samurai quarters are called Bukeyashiki or Samurai-yashiki. In the samurai quarters, the proximity to the castle and the size of the home were respective to the samurai's rank and standing with his lord. Samurai homes were typically modest dwellings but with the distinction that only samurai were allowed to have walls and gates. Samurai residences were the property of the local lord, but the residents were responsible for upkeep. Samurai residences also served as another defense of the castle which is why you'll find them clustered near the castle and often strategically placed along important thoroughfares.

During the Meiji Restoration, most castles were destroyed by Imperial edict, but (as far as I know) these homes were mostly untouched. Since they were simply houses, they were often sold to merchants and government officials, among others. At the time, there was little or no historical significance attached to them, so most have been destroyed over the years to make way for more modern homes. It is not uncommon today to find sites designated as former samurai residences that are still being lived in and are not open to the public. As their owners age or people decide to move, more of these houses are being donated to or bought by the local government to be preserved for their historical value. Some of these houses have been moved to new locations or their land has been reduced so it is not easy to get the full picture of what the entire residence, including peripheral buildings and gardens, was like. Some of the houses that have been lived in until fairly recently also have had some modern conveniences like electricity and glass windows installed.

The best and most complete samurai homes I've seen can be found at Matsushiro Castle. Just because you have a well preserved castle town, however, it does not mean that you will also find a lot of samurai homes. There are some great castle towns like Iwamura Castle and Izushi Castle where you will find nice examples of merchants' homes and other castle town structures but almost no good samurai homes. There are also some relatively unknown castles like Sakura Castle and Kaminoyama Castle that have a few very nice homes open to the public.

The Yokota Residence at Matsushiro Castle is one of the best examples of a samurai residence that I've seen. The home is of a middle class samurai. The property and structure is almost completely original and retains all the main features of a residence. It is also recognized as an Important Cultural Property. In the map below, the main features you'll see are the main gate, home, stable, 2 storehouses, a formal garden and a vegetable garden. 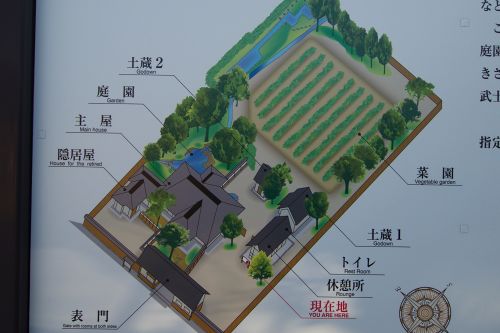 Samurai were the only people allowed to have a walled home and gate. Nagayamon type gates tend to be common for samurai homes. The large Nagayamon often has a small room on built into either side of the gate to serve as a stable, servants' quarters, quarters for retainers or lower ranking samurai, or may simply be used for storage. You may also see Yakuimon gates which tend to be more ornate, but less functional. 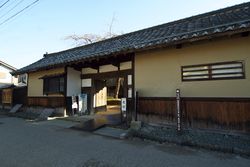 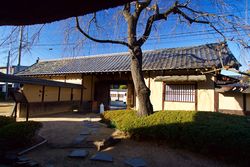 The house typically has an ornate front entrance for greeting guests of equal or higher rank and for the master to use as a formal entrance. In the picture below you'll also see the smaller non-descript doorway on the right (ohdoguchi 大戸口 ) that was used by others. The formal entrance has tatami mat room (genkan 玄関) with a wooden level before it called shikidai (式台). This is to formally greet or see off guests. 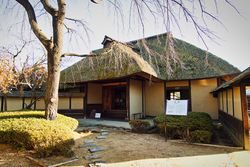 The main house (omoya or shu-oku) is typically in the shoin zukuri style which indicates that it is built around a central main room and has an interior that is mainly covered in tatami straw mats (excepting the kitchen area) with rooms divided off the main one by sliding doors (fusuma or shoji). The main room has a recessed alcove (tokonoma) with staggered shelves and a space to hang scrolls. This room is also situated to view the garden in the back of the house. The formal rooms often have wood panel ceilings while the kitchen and other less formal areas are bare to the rafters. In the first photo below you can see the tokonoma, wood panel ceiling and the garden off to the right. The second photo highlights tatami rooms that are divided off by sliding doors and the last photo is of the kitchen where you can see the unadorned ceiling. 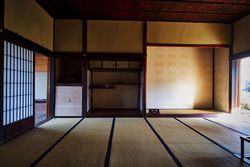 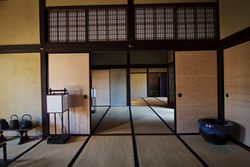 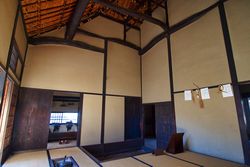 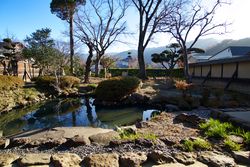 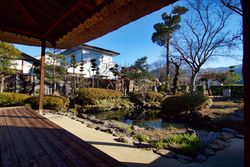 A residence typically had one or more storehouses. 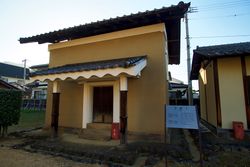 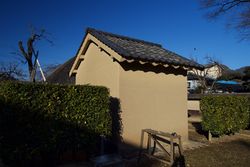 Stables seem to be more rare, at least extant ones at the residences that I have been to. In the case of the Yokota Residence, the actual stable is now gone but it has been rebuilt with this building of approximately the same dimensions and on the same location. It is now a public restroom. As mentioned under gates, a room of the Nagayamon gate could also be used as a stable. 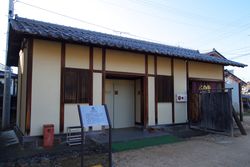 Samurai Residences also frequently had a vegetable garden in the back of the property, which you can see in the map above under Structure. Lower class samurai may have had a small vegetable garden only and no formal garden.

This has been a basic introduction to samurai residences. Residence types and styles vary as widely as castles do. If you have an opportunity to visit samurai homes while traveling, I encourage you to do so.

Refer to the Samurai Residence List for those documented on this site.

Over the course of a month I wrote the profiles for the first 34 samurai homes including sorting and selecting photos. One of the classifications I decided to use was based on the class of the samurai. Homes are usually described in terms of the hierarchical class of the samurai (upper class, middle class, etc). Most of the homes I have were of the middle class. Among those, as well as the other classes, there was no uniform way to guess which class a home belonged to across domains. The wealth of the domain and customs or styles within the domain all seemed to have some impact on the houses.

Finally, the size of the residence property varied greatly between castles. Kaminoyama, Bitchu Matsuyama, Kanazawa, and Hagi all seemed to have rather small compact grounds, but Kakunodate and Matsushiro seemed to have fairly large properties, in comparison.

It goes without saying that the subject of samurai homes is one that could use much more research. I'd love too see a detailed book about samurai homes some day, or maybe I'll just have to write it myself. Until that time, please enjoy the profiles and photos on this site. I will certainly add more photos, homes and articles as I uncover more.

disclaimer: The information here is based entirely on my own impressions from visiting hundreds of castles and dozens of samurai homes. If you have found some good information or have a different idea on this matter please share through the comments box below or send me an email via the Contact form. I've only developed an interest in these residences in the last couple of years so I have missed many years of castle travels where I could have gathered even more information. Unfortunately, I cannot find even one good book in Japanese that discusses samurai homes in detail so I'm largely putting this together through what I've come to understand while visiting different sites. Regarding naming conventions, you often see "former" used before the residence name, like the Former Yokota Residence, but I have dropped these. It is obvious that the family is no longer living there and it's redundant to write "former" before each and lists would not sort well alphabetically. I'm using the term samurai residence to mean the entire estate including house, gate(s), garden, and any other support structures, but I'm using samurai home specifically to mean the house itself.

3 months ago
Score 0 You
I always wondered how many people lived in one such household and what roles they had.

That is really cool! Can i make a post sharing a bit of your content to my brazilian audience into: https://demonstre.com/jardim/ - I really think it is goint to be really relevant! =)

Please be my guest! I only ask that you give appropriate credit. Good luck.
Permalink

Retrieved from "http://jcastle.info/smw2021/index.php?title=Samurai_Residences&oldid=22326"
This page was last edited on 21 February 2018, at 00:17.
Content is available under Creative Commons Attribution-NonCommercial-ShareAlike unless otherwise noted.
About Jcastle.info
Contact Jcastle.info