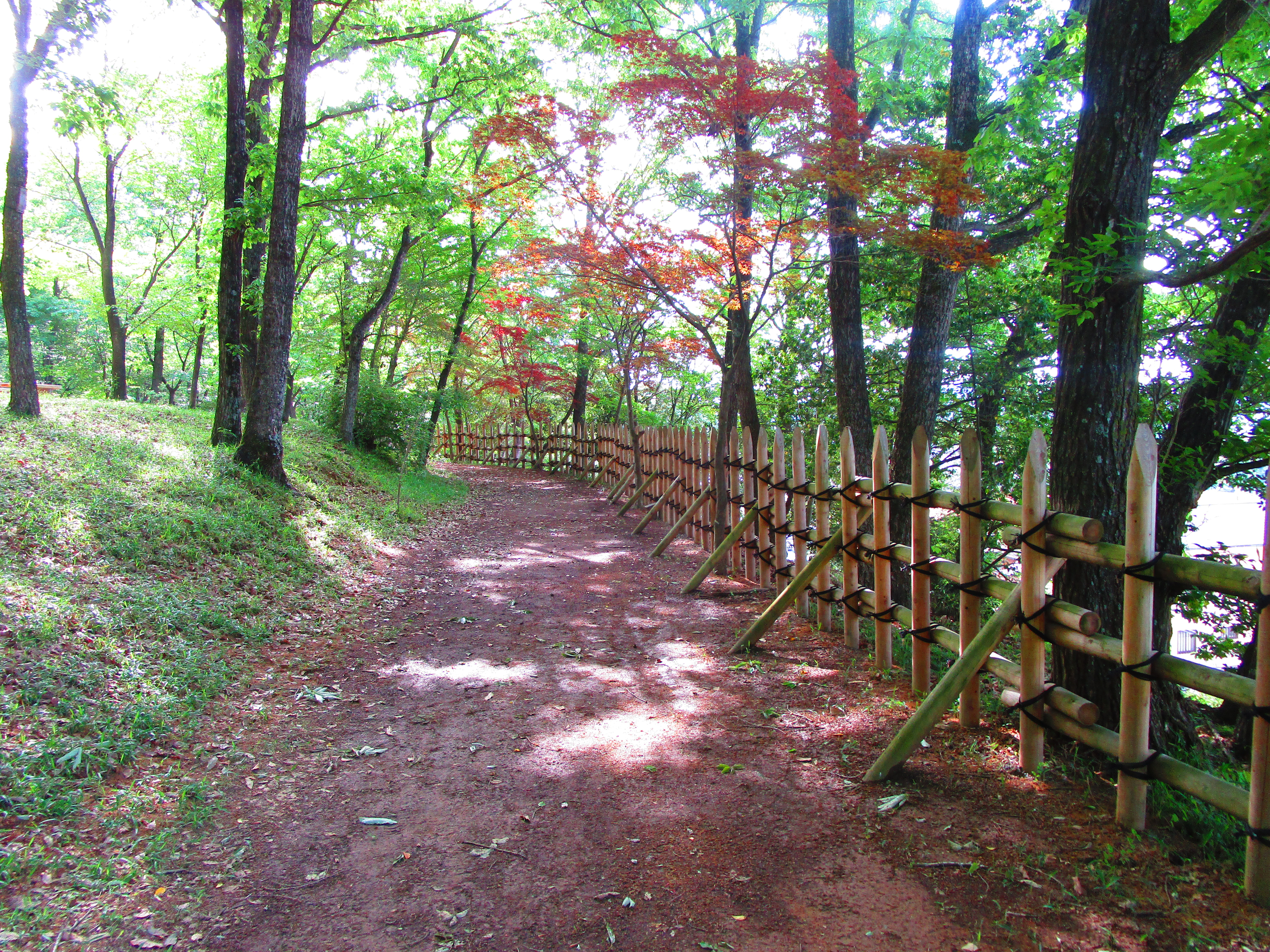 Akechi-Osayamajō may have been built as early as 1342 by Toki-Akechi Yorikane, the second son of Toki Yorikiyo, fifth generation governor of Mino, or by Akechi Yorimoto, father of Akechi Yorishige. The Akechi Manor Hall was located somewhere in the area, though it is not known exactly where. In 1552, Akechi Sadāki was killed in battle against Saitō Dōsan. In 1556, Saitō Yoshitatsu, lord of Inabayamajō, attacked Osayamajō. Akechi Mitsuyasu, lord of Osayamajō at that time, defended his castle alongside Akechi Mitsuhisa (his lordship's younger brother), Akechi Mitsuhide (his lordship's nephew), Mizō Shōzaēmon, Miyake Mibunosuke, Fujita Tōjirō, Kani Saēmon, Mori Kageyu, Ikeda Oribe, Hida Genba, and around nine hundred of their followers. However, two days into the assault upon the castle Mitsuyasu conceded defeat and opened his belly (his womenfolk opened their throats).

According to the Akechi Gunki (War Chronicles of the Akechi Clan), Akechi Mitsuhide was present at the battle but escaped before its final fall, having been instructed by Akechi Mitsuyasu, his uncle, to carry on leadership of the clan. Akechi-Osayamajō is also one of the contenders for the birthplace of Akechi Mitsuhide. Akechi Clan graves are to be found at a nearby temple.

There are several "Akechi Castle" sites, of which this (might!) be one, and so it is also known as Osayamajō to distinguish it. There are many baileys, some of them deformed, but few other features to see, unusual for a site of this size. Castle researcher, presenter and author, Chris Glenn, tells us that it might not even have been a castle site! I did feel somewhat confident about a horikiri (trench) and koguchi (gate complex) ruin near one of the lower baileys though. Restored features include sakamogi (abatis), fences made from tree branches, and babōsaku (anti-cavalry palisade).

Anyway, I was more interested in the historical narrative of the apparent castle than the features. Considering the dearth of interesting structural features, it's fascinating that this site is cherished, maintained well, and promoted as a tourist destination. An old man rolled up whilst I was waiting in the carpark and sold us a commemorative seal. If only every middling castle site was so well loved! But, of course, the castle is notable for its historical associations more than anything else.

Let me ask you something: was Akechi Mitsuhide a traitor? English language materials often present him as such, generally being disparaging. I think this is unfair. You couldn't trust a samurai as far as you could throw him. Did Toyotomi Hideyoshi prove any more loyal? The focus on Akechi as a traitor derives from a tragically romantic notion of samurai being otherwise very loyal, but this was the exception and not the rule. There was no bushidō and each man was out only for numero ichi. The amount of times the samurai would back stab and lie to each other is a testament to that. Even so, I thought the mayor's message inscribed on a plaque next to a large statue of Akechi trying to present Akechi as an ambassador for love and world peace was a bit laughable. By all means lionise the local historical leader but let's not project our own image onto his, eh?

(At the castle I saw a kamoshika (idiot goat), and chased it up the mountainside. I moved like a spider on my toes and hands up the cliffside but the beast bolted so quickly that it crashed through the forest, bleating, rising much ruckus, and got clear away from me. I only wanted to love him!)

Retrieved from "http://jcastle.info/smw2021/index.php?title=Akechi_Osayama_Castle&oldid=48431"
Category:
This page was last edited on 16 June 2021, at 03:30.
Content is available under Creative Commons Attribution-NonCommercial-ShareAlike unless otherwise noted.
About Jcastle.info
Contact Jcastle.info