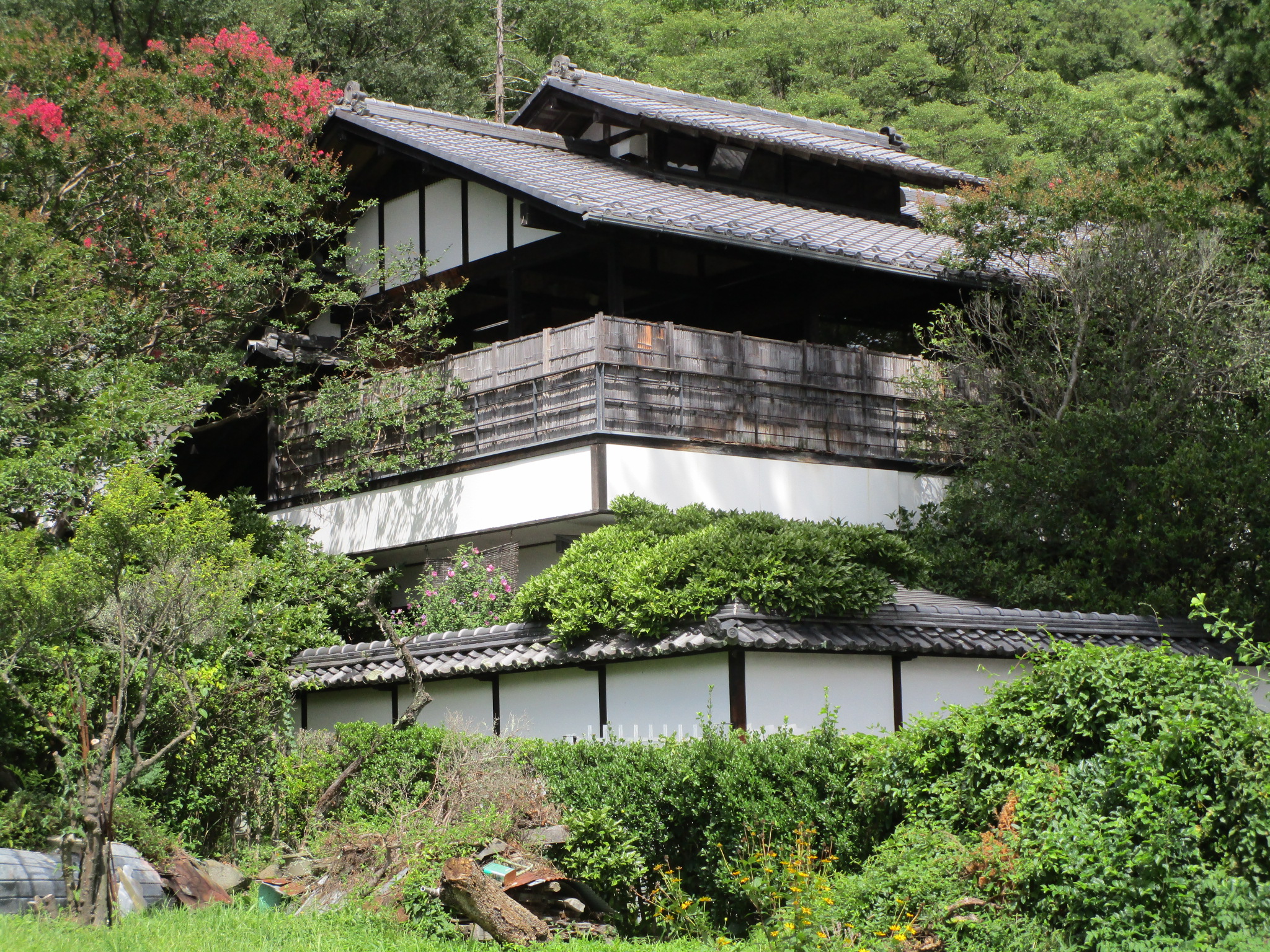 Asama-onsen is first recorded in Japanese history in 698 in the Shoku-Nihonki (続日本紀, "Chronicles of Japan: The Sequel") as Chikuma-onsen (筑摩温泉), named after the district. In Classical Japan there was a district office for Chikuma here, subourdinated to the provinvicial office in Minochi District (Nagano). The community was called Asama-onsen after Asama Shrine by the late Heian period, at which time it was part of Asama-gō (a township), ran by the deputy of the Seiidaishōgun who administered Kantō. The site of the yakata (fortified manor house) on the site of the Goten no Yu bathing facility was originally built by the Oguchi Clan. It is not clear to me whether the earlier district office was on the same site or not, but we may say that the feudal fortification of this site began with the Oguchi in 1310 after they were dispatched by Hōjō Mototoki following his appointment as shugo (governor) of Shinano Province. In 1335 Hōjō Tokiyuki instigated the Nakasendai Rebellion and invaded Shinano. The provincial offices in Minochi were ravaged and thereafter the new provincial offices were moved to the Asama yakata site under the new governor, Hosokawa Mitsutsugu.

In 1590 Ishikawa Kazumasa was appointed lord of Matsumotojō by Toyotomi Hideyoshi. He built the Asama Palace on the site of the medieval yakata and used it as a private bathhouse. Since this became the site of a secondary residence of the lord, seconded only to the castle itself, and was a very private place, Asama-goten was also colloquially called the "inner sanctum of Matsumoto (松本之奥座敷)", despite being a little distance outside of the castle town. The lord's retainers also then built their residences nearby, some of which also became notable bathhouses, such as the Yanagi no Yu ("Willow Hotspring"). Lord Kazumasa was suceeded by Lord Yasutsugu, whose third son, Ishikawa Masamitsu, was made administrator of the facility. In the Edo period successive lords of Matsumoto used the establishment; it was known as Goten no Yu (御殿之湯), or "palatial hotsprings".

Nearby are the tombs of three generations of the Ogasawara Clan: Sadayoshi, the founder of Matsumotojō (formerly it had been Fukashijō), who died in 1595, and of his son, Hidemasa, and his grandson, Tadanaga, both of whom died during the Ôsaka Summer Campaign in 1615. The grave stones are gorintō style. Originally there was a mausoleum-shrine building erected by Mizuno Tadanao, a later lord of Matsumoto Castle, but this was destroyed by fire at some point. However, some fine Edo period ishigaki remain in an angled configuration like a smaller version of a castle gate complex.

Biwa no Yu (枇杷の湯, "Loquat Hotspring") is an inn and hotspring facility in the hotsprings town of Asama, just outside of Matsumoto city centre (and in Matsumoto Municipality). It is the successor to the Asama Palace (浅間御殿), a residence and bathhouse used by the lords of Matsumoto Castle. The Asama-goten was in turn built on the site of a medieval fortified manor hall refered to as Shironōchi-kyokan (城之内居館). No traces of the medieval ruins remain, but there is an Edo period mausoleum site nearby for the Ogasawara Clan. The bathhouse itself is open to day-trippers. I had a look around but only had time to soak in the atmosphere. I then went to visit the graves of the Ogasawara and was surprised to find ishigaki (stone-piled walls) that looked like a gate ruin. There used to be religious structures here in the Edo period. Lastly I went up to the mountain behind the site, (suggestively) called Goten'yama, just to check there for any possible sign of fortification, but there is only a kofun up there.

Retrieved from "http://jcastle.info/smw2021/index.php?title=Asama_Palace&oldid=48877"
Category:
This page was last edited on 19 October 2021, at 10:46.
Content is available under Creative Commons Attribution-NonCommercial-ShareAlike unless otherwise noted.
About Jcastle.info
Contact Jcastle.info