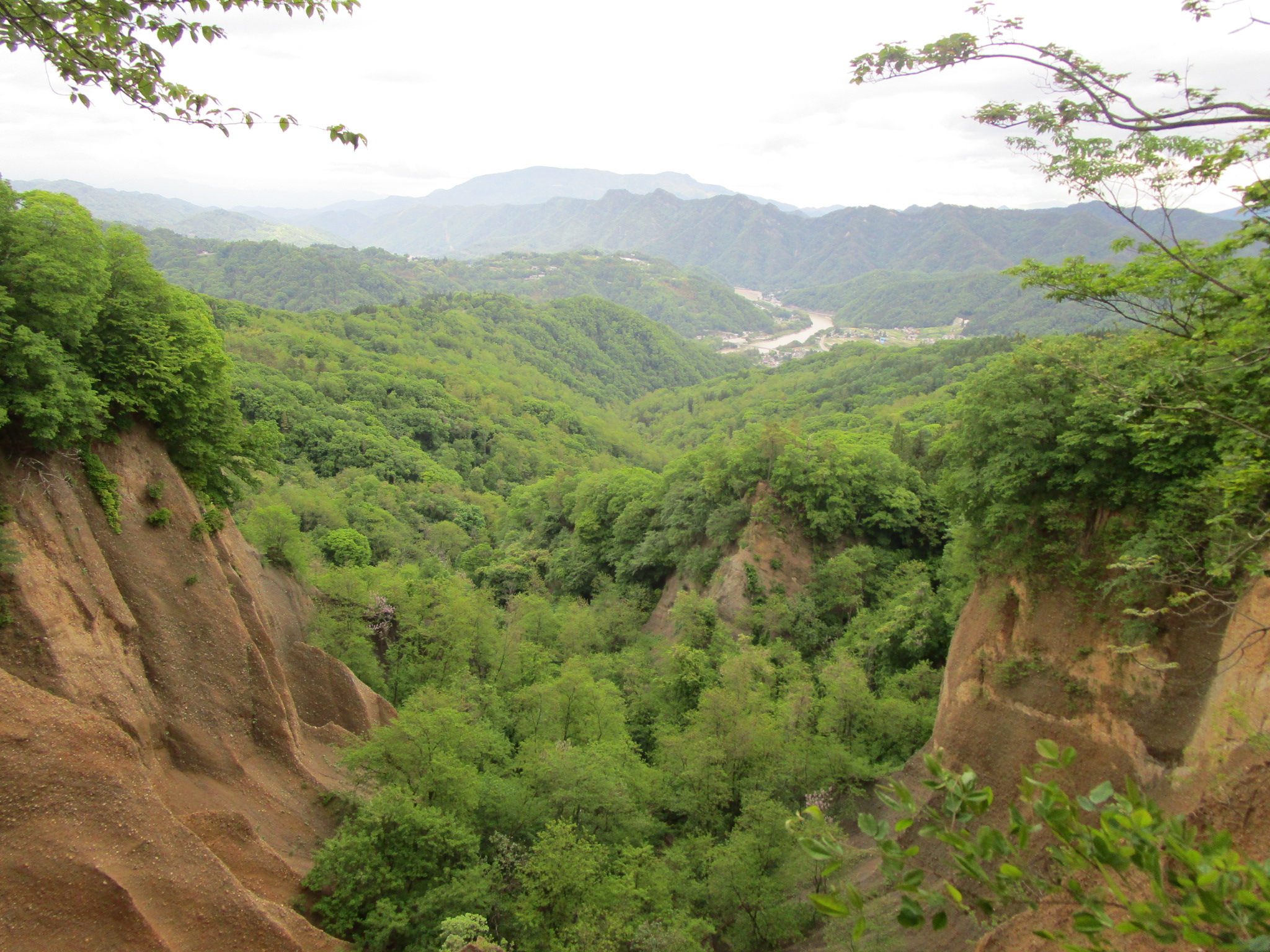 Various ruins are recorded, such as moats, terraces and a flattened area at the summit, as well as even a pond where the lord of the castle was said to fish! But all of these features have been collapsed and buried by landslides. Tanoiri(yama)jō was built by Abe Gorōmaru in the Early Kamakura Period.

Coming upon Tanoirijō was like discovering a lost world. I had been on the mountain for a while and seen no one. I made it to the Tanoiri Pass, which Tanoirijō once guarded. Tanoirijō is located directly above the pass, and the pass, a cutting through the mountain ridge, appears like a large dry moat for the castle. Ascending to the ruin, however, I found a narrow ridge with empty space beyond. The castle's baileys had been collapsed by the movements of the mountain. These strange land formations are known as the Mamako-otoshi no dobashira (Stepchild Drops Earthen Pillars). The mountains here are made up of a loose sedimentary rock which is prone to collapse. Eventually even these formations must collapse. Since there had been heavy rains the day before, I didn't wonder, looking out over the strange vista, whether the mountain wasn't due for another slide, and gingerly stepped back from the edge.

"Mamako" means "stepchild", and folklore has it that the formations of spiky rock got their name when a stepmother pushed her husband's child from the tallest pinnacle in a fit of jealousy. Is this where unwanted stepchildren are brought even today? Not wanting to orphan my future children, I forswore from further exploration under the averse conditions. Afterward I searched online. A local blogger, Matsumoto-san, viewing the rocks from below asks "there is apparently a path up to these terrific rocks, but is it worth it?", and he shows these huge cliffs with trees clinging to the nethermost parts. Then it struck me that I was up there mulling around and looking for a castle! Well, Tanoirijō certainly isn't worth falling over a cliff since few ruins have survived the landslides, but it was very interesting to see such sights.

Retrieved from "http://jcastle.info/smw2021/index.php?title=Azumi_Tanoiri_Castle&oldid=47740"
Category:
This page was last edited on 25 May 2021, at 15:51.
Content is available under Creative Commons Attribution-NonCommercial-ShareAlike unless otherwise noted.
About Jcastle.info
Contact Jcastle.info