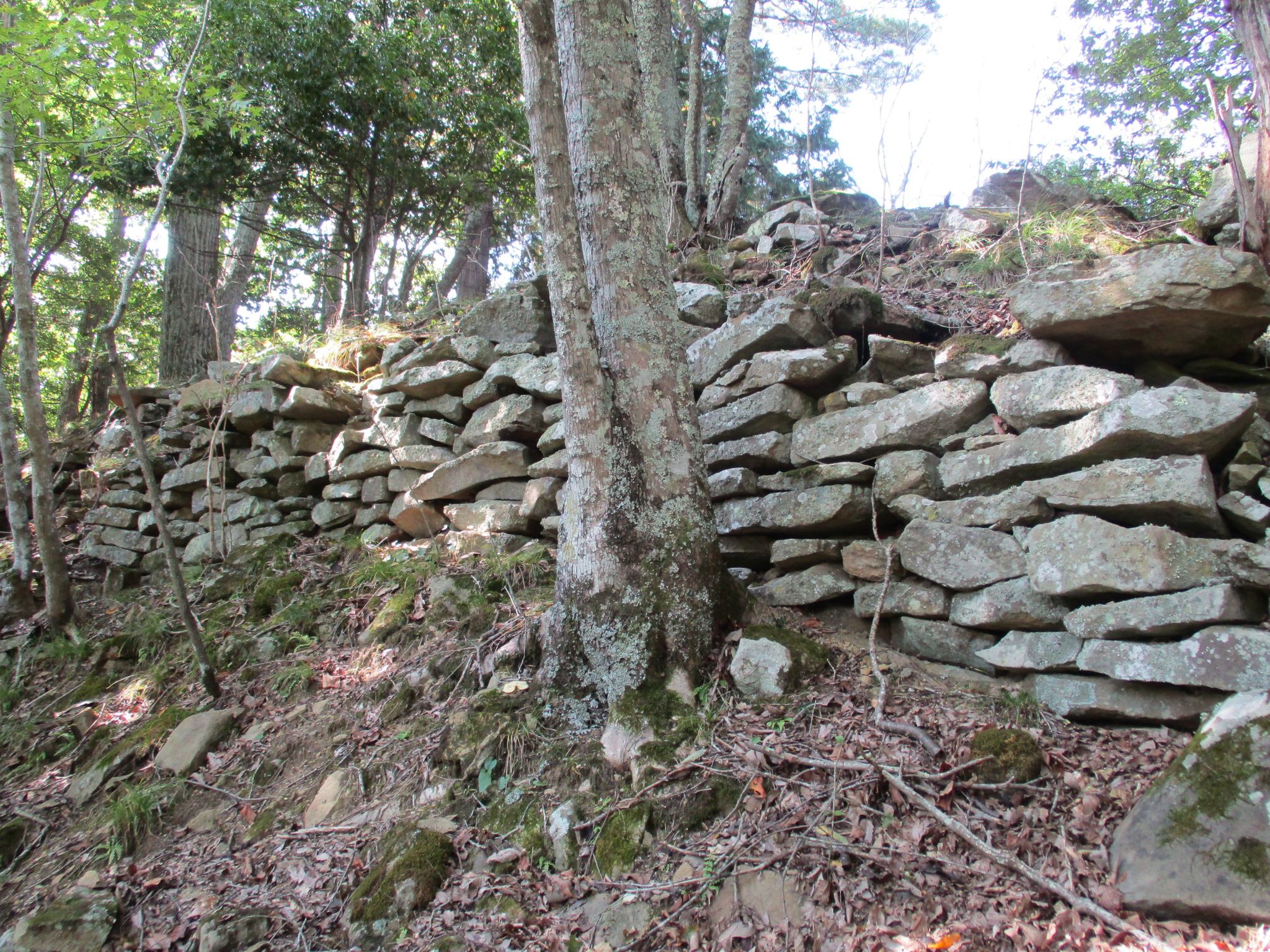 The Shinputōki records that Asakajō was built by the Andō Clan. "An" in Andō takes the same ideograph as the "A" in Asaka (安). It is thought that the Andō served the Aoyagi, and that Asakajō became a branch fort of Aoyagijō, protecting its eastern side. Asakajō may have originally been built as a replacement by the Andō for their original base at neighbouring Koshikōjō - if Koshikōjō is the same as Asakakojō ("Asaka Old Castle"). Asakajō was built over a complex of kofun (ancient burial mounds), and its construction involved recycling old materials and burrowing through the ancient tumuli. Asakajō rebelled against Aoyagijō during the Tenshōjingo War between the Uesugi and the Ogasawara (from 1583), supporting the Uesugi Clan.

Asakajō features ishigaki (stone-piled ramparts) piled for the castle. Like the site I visited before it, Koshikōjō, it has layers of history, but in this case the castle layer stands the boldest. The site is protected by fences to keep animals on the mountain. The gates in them were some of the most fiddly I've come across, roughly closed shut with chord. There is a signpost at Asaka Shrine indicating a trail to the castle, but it is difficult to follow. It basically goes to an awkward gate in the fence. Then there is just mountain. There is a better trail that goes up from a nearby temple, Hōanji. Either way it's not so much of a climb before the castle's lower reaches are found.

Asakajō may be said to have been built by grave robbers, since it was built over the site of an ancient necropolis. Materials from these tombs were dug up and re-used to construct the castle. There is a striking if unusual fortified space at the very start of the castle's precincts. It consists of a large "L"-shaped dorui (earthen rampart) segment with stones lining the inside. This is thought to have been a space for mustering troops whilst screening them from the outside. It may have been constructed by hollowing out an ancient tomb.

There are several small, narrow baileys along the ridge as it climbs. A large horikiri (trench) has been cut deep into the rocky ridge, in effect forming a large stone wall. Both sides of this huge trench have dark openings. These are the gaping mouths of dead tombs. Interred within were kings and wizards so ancient that none now know their names. The ultimate destiny of their sepulchral houses was to be recyclced as castle defences. Another tomb opening is found in the main bailey where a large stone slab now stands erected.

The principal baileys of this castle consist of two baileys on the peak, with one slightly lower situated than the other, forming a stone-lined wall between the first and second. A third bailey is terraced beneath the second. It has a spur, checked by a trench which eats into the hillside, which goes beneath both the first and second bailey. This is a "hip bailey". I came through here first so as to appreciate the first and second bailey from below. Both of these baileys have ishigaki lining them. To my suprise there was a lot of ishigaki also beneath this hip bailey toward the furthest corner. This is a most spectacular area of the castle ruins. To the rear of the principal baileys is a gigantic trench. Ishigaki can be seen on the "castle side". "Mountain side" there are many more trenches cutting into the ridge one after the other. Two large trenches sandwhich a smaller one which is spanned by a dobashi (earthen bridge), creating a sort of "H"-shaped configuration.

Asakajō is little known and difficult to find. Yet it has layers of ruins and mystery. The ishigaki and remains of kofun (ancient burial mounds) are a major attraction in visiting this site. In structure it is an examplar of the kind of Sengoku period forts found in central Shinano.

Retrieved from "http://jcastle.info/smw2021/index.php?title=Chikuma_Asaka_Castle&oldid=49297"
Category:
This page was last edited on 30 December 2021, at 18:48.
Content is available under Creative Commons Attribution-NonCommercial-ShareAlike unless otherwise noted.
About Jcastle.info
Contact Jcastle.info