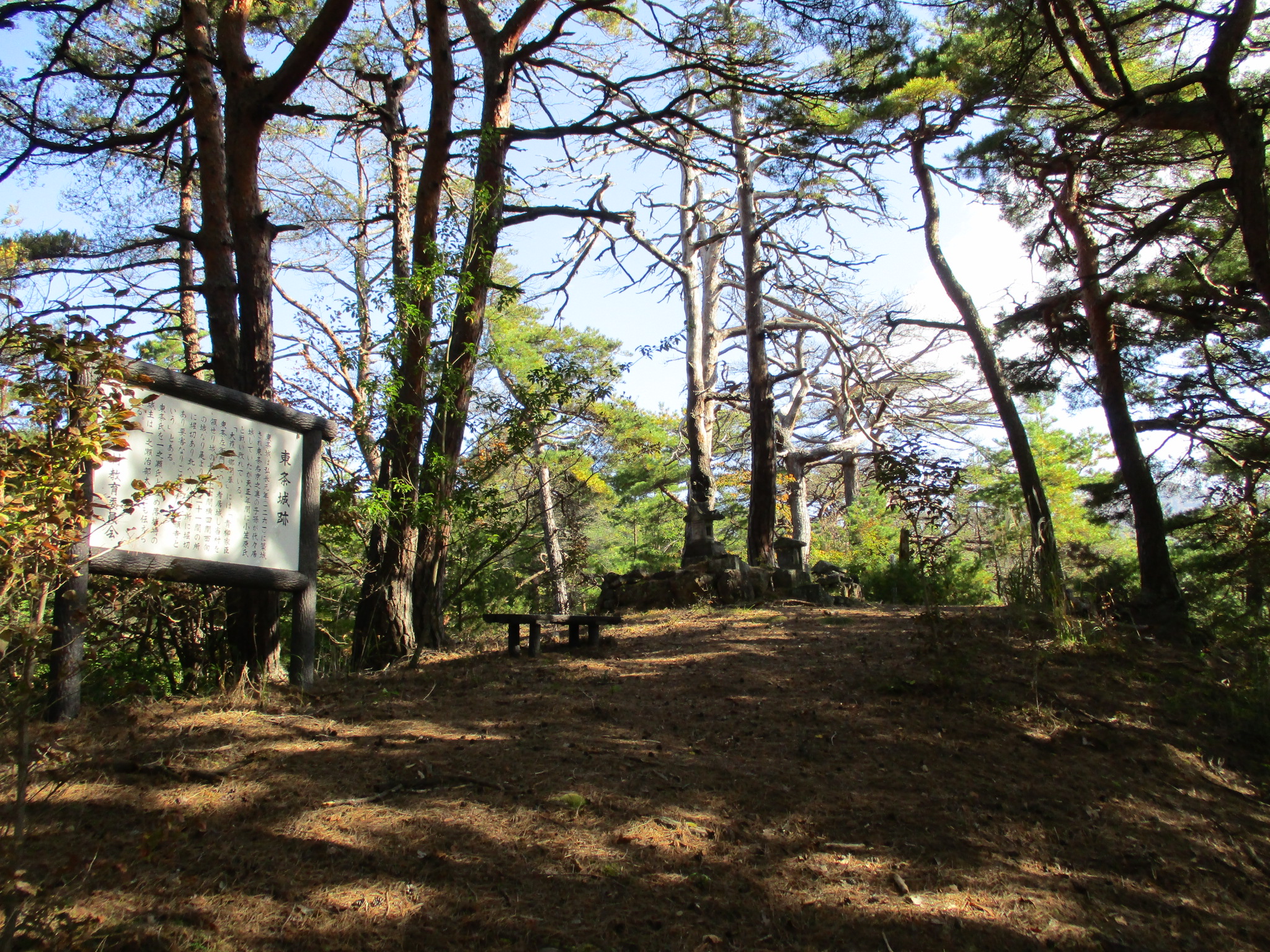 Higashijō was a branch castle of Aoyagijō, used to guard a strategic area to the south which formed a crossroads in the valley. It was twinned with Nishijō located on the opposite side of the valley.

Higashijōjō is in Nishijō, which is confusing. Or the nearest station is called Nishijō at least. More properly it is in Higashijō, and both Nishijō (西条) and Higashijō (東条) were part of Honjō (本城), a village-level municipality which since 2005 is now part of Chikuhoku (筑北), a larger village-level municipality in Higashi-Chikuma District (東筑摩郡). I think I'd be less confused if I didn't understand Japanese. Nishijō is the administrative centre of Chikuhoku-mura, but basically the whole municipality is just a series of small villages and countless hamlets. Nishijō itself is a quaint village surrounded by fields and mountains.

The ruins of Higashijōjō can be reached via a trail either from Hakusan-jinja, which is to the south and closer to the station, or via a route on the northern ridge. It's easier to take the northern ridge up and the shrine's causeway down, the latter being much steeper. Ruins related to the castle begin at the very start of the trail to the north.

Down a country lane is an old sign board about the castle and a direction post. There is also a marker for the Karō-yashiki (Chief Vassal's Residence). To the right, passing by a small valley, there is a path which climbs onto the ridge. Here there is a series of earthworks, such as terraces and embankments, which represent the former kyokan area of the castle, or the place that the castellan would actually reside when not under siege.

After a brief climb up the ridge we reach the ruins of the castle proper. There are six baileys in an "L" formartion which follow the natural contours of the terrain. The lowest, perhaps the sixth bailey, has some terracing along the approach and a modern gazebo structure. Higher up is the next bailey which is treated as the main bailey by the local education board since this is where we find marker posts, explanation boards and a general sense of maintenance (the tattered board at the bottom of the ridge has been amended but not repaired to include the new village authority of "Chikuhoku" but the sign board at the castle itself still reads "Honjō Village"). Yet this bailey is the lower than the subsequent baileys; counting backwards from the topmost it would be the fifth. It has forward facing terraces and what I think may have been a koshikuruwa ("hip baileys") on the south side. Beneath the bailey rocky outcroppings produce a sort of natural wall to the bailey's south side.

Between the fifth and fourth bailey I noticed what looked like the remains of a trench and earthen bridge (but it was not shown on the map I was referencing). The ridgeline sweeps up again and we come to the fourth bailey with the third immediately above it. These baileys are barely worked, having been only somewhat flattened if at all (it's hard to tell what work the mountain has done in five centuries) without terraces or trenches, and may be described as "natural baileys". Indeed, Higashijōjō makes splendid use of augmented natural terrain. There are a tremendous amount of rocks and boulders here. Beneath the third bailey there is a collection of rocks which form a path in the vague shape of a castle's koguchi ("tiger's maw gate"). The bailey itself is full of small but sturdy pine trees growing out of white sand like a bonsai arrangement. It seemed to me like a natural garden, and the rocky landscape offered thrills which reminded me of the pleasure gardens of Sūzhōu.

Between the third and second bailey several large boulders stand, and between three of them are sudden drops or chutes along the ridge which look like they could've been used as climbing trenches. There is an unworked peak at the top of the castle mount, a place where several large pines stand called Pine Path, and to the south at a right angle are the first and second baileys. These have a well preserved (albeit difficult to photograph because of the trees) horikiri (trench) with a dorui (earthen embankment) protecting the first bailey. The first bailey has some terraces beneath it. Though slightly narrower than the fifth bailey, it seems this may have been the main bailey, or at least the last line of defence. The trail leading down from here takes one to Hakusan-jinja, a shrine built beneath a series of gigantic boulders forming a cliff. I saw a cave in one of the rocks, and when I bent down to peer inside a snake slithered out. Higashijōjō is a blend of nature and castle ruins!

Retrieved from "http://jcastle.info/smw2021/index.php?title=Chikuma_Higashijou_Castle&oldid=49298"
Category:
This page was last edited on 30 December 2021, at 18:54.
Content is available under Creative Commons Attribution-NonCommercial-ShareAlike unless otherwise noted.
About Jcastle.info
Contact Jcastle.info