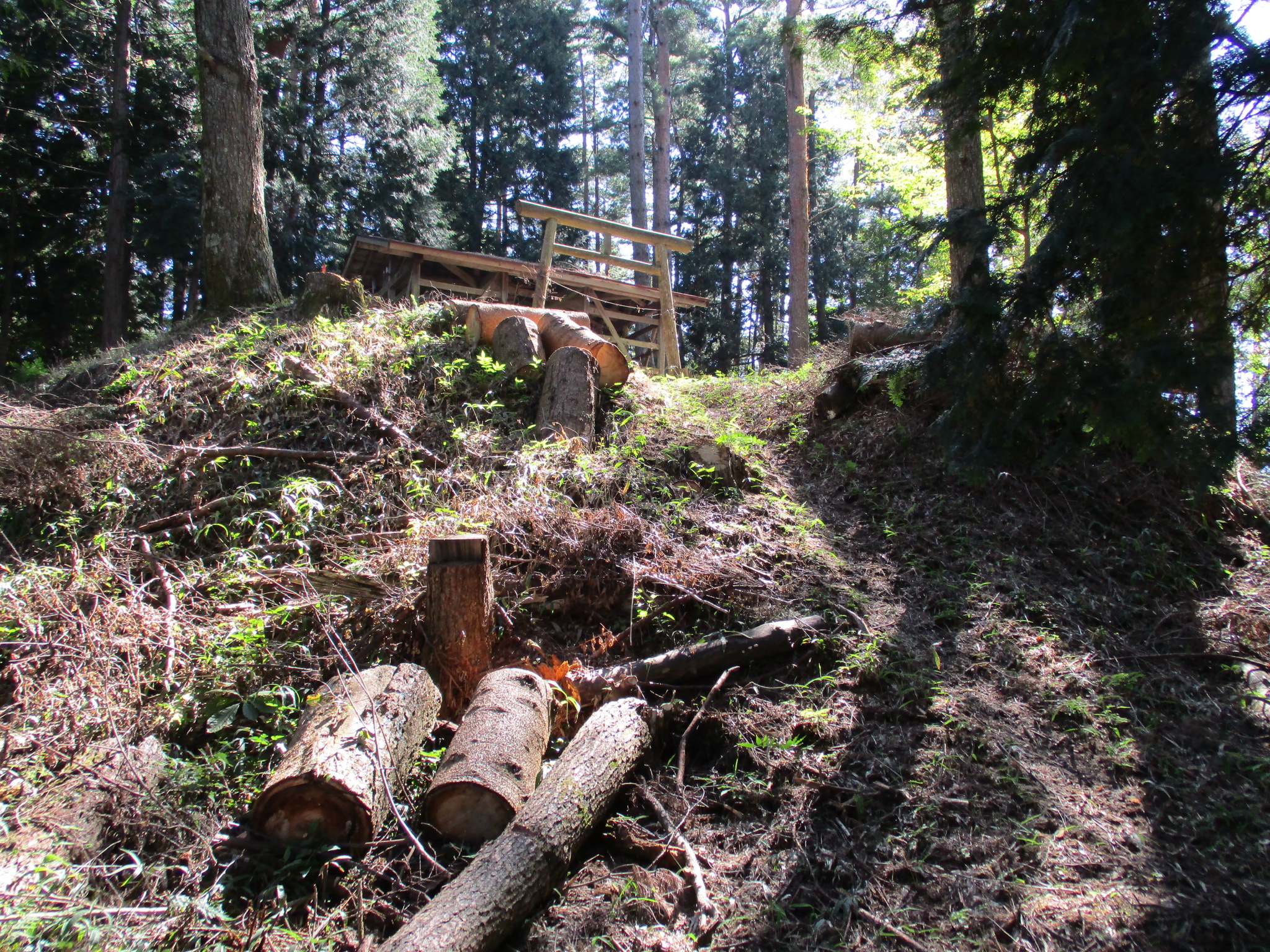 It is not known who first built Narukamijō, but possibly it was one of two clans active in the area: the Shimadate or the Mizugami. The castle was subsequently controlled by the Ogasawara, and then the Takeda, and, finally, a resurgent Ogasawara once more. Narukamijō was abandoned before the Edo period.

The ruins of Chikuma-Narukamijō consist of earthworks, including trenches and baileys. Approaching from the direction of Tokô village the ruins unfold thusly: a sub-bailey is apparent beneath the earthen ramparts of the main bailey. The ramparts are steep. In the middle is a stairway. A gate would've stood here. The main bailey, large and flat, now encompasses a shrine. The earth beneath the shrine's kami house is raised slightly. To the left the castle ruins continue (there may be an additional spur of ruins to the right but it was too overgrown for me to tell). Here there are terraced sub-baileys in a step-like configuration. Two sub-baileys each have what I'm fairly sure are well ruins in. After these is a shallow trench, but on the castle side it is deep due to shifting elevation. There were probably more small, terraced micro baileys beneath this but the ground has reverted to a slope now. At the bottom of this slope is a very well worked trench cutting, a horikiri, dug deep into the mountain ridge, and this marks the end of the castle ruins proper. After that there are some more signs of the mountain being worked, such as possible climbing trenches - on one sideof the mountain only - as well as more pits where wells were likely dug. Usually I refer to some kind of map but I could find none for this site; I've since sketched my own for reference (from memory; not on site).

From Tokô village there is a well developed hiking trail which leads to the peak of Narukami. It's not possible to get lost. I saw many harvestmen during the hike up. Where I'm from we call these arachnids "daddy long legs" but some people use that term to refer to craneflies or certain types of spiders. These creatures are not well loved, but the Japanese kind is particularly creepy because two of its forward legs are extra long, terminating in hair-like extremities which it apparently uses to feel its way about. I saw one bobbing up and down in an evil dance which appeared to aid in devouring something it had caught in its chelates.

There are two signs which may cause confusion. The first is at the base of the mountain. One sign points up to the mountain on the left, and the other to some place else: Ôte-something. Ôte refers to the main gate of a castle, but I took the left route and I don't recommend going right as it will go some place else before going to the castle ruin. The second confusing sign is not far below the castle. It says "Ôyokote (大横手)", which maybe refers to "the side entrance" to the castle ruins, but it isn't a proper castle term I think. I chose to ignore it and took a smaller trail which went directly to the castle ruins via the ridgeline and comes out at the main bailey. One can follow the sign for an easier trail; it comes out at the castle's horikiri, and from there the rest of the ruins are to the right.

Retrieved from "http://jcastle.info/smw2021/index.php?title=Chikuma_Narukami_Castle&oldid=49305"
Category:
This page was last edited on 30 December 2021, at 19:34.
Content is available under Creative Commons Attribution-NonCommercial-ShareAlike unless otherwise noted.
About Jcastle.info
Contact Jcastle.info