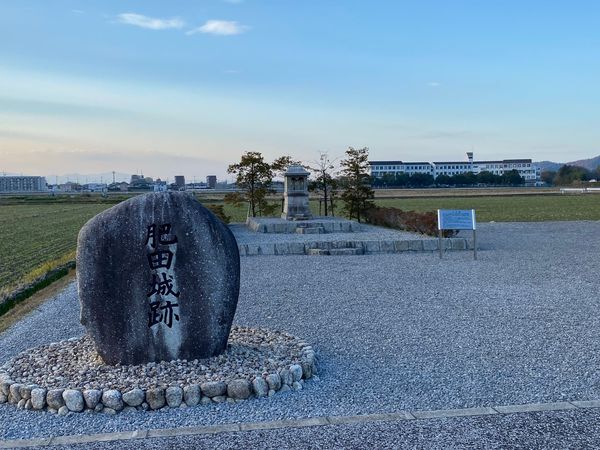 Hida Castle in Shiga Prefecture was a hirajiro, a flatland castle is believed to have been built around 1521-1528 by Takanose Takashige, lord of Takanose Castle on the orders of their feudal masters, the Sasaki Rokkaku clan. The Takanose had been loyal to the Rokkaku clan for generations, but in the mid 1500’s under the leadership of Takanose Hidetaka, the clan came formed an alliance with Azai Nagamasa, Daimyo of Odani Castle. As a result, the Takanose clan came under a large scale attack by Rokkaku on two occasions, in the Battle of Hida Castle in 1559 and the Battle of Norada Omote the following year.

The Rokkaku built high earthen mounds around the castle perimeter and drawing water from the Uso and Aichi Rivers planned a mizu-zeme, a water attack by flooding Hida Castle out. However, the surrounding earthen embankments collapsed and the water attack ended in failure. When the Azai clan was destroyed by Oda Nobunaga, Takanose Hidetaka served under Shibata Katsuie, but was defeated by the Echizen Ikkou revolt of 1574 and he committed suicide.

After the death of Takanose Hidetaka, Hida Castle was occupied by Hachiya Yoritaka and Hasegawa Hidekazu under the leadership of Nobunaga Oda and Hideyoshi Toyotomi, but the castle was abandoned around 1597 when Hidekazu died of illness during Hideyoshi’s Korean Campaign.

During the Edo period the central part of Hida Castle was reclaimed and transformed into rice fields. The outer perimeter of these areas is still surrounded by earthen mounds and moats. It is likely that the moats were used as a precaution against flooding from the Uso River, and also to protect Hida Castle and the castle grounds in case of war.

Today, most of the remains of the castle are gone, having been replaced by urban areas and rice paddies, but earthen mounds and the remains of a moat that once served as a waterway remain east and south of the site. A stone monument to Hida Castle stands at the Hida-cho Community Center, west of the Soutoku-ji Temple. Although usually not open to the public, the Soutoku-ji contains a large three tatami mat sized Edo period map of the castle and surrounding areas, and drawings of the castle.

Retrieved from "http://jcastle.info/smw2021/index.php?title=Echi_Hida_Castle&oldid=57125"
Category:
This page was last edited on 21 August 2022, at 11:05.
Content is available under Creative Commons Attribution-NonCommercial-ShareAlike unless otherwise noted.
About Jcastle.info
Contact Jcastle.info