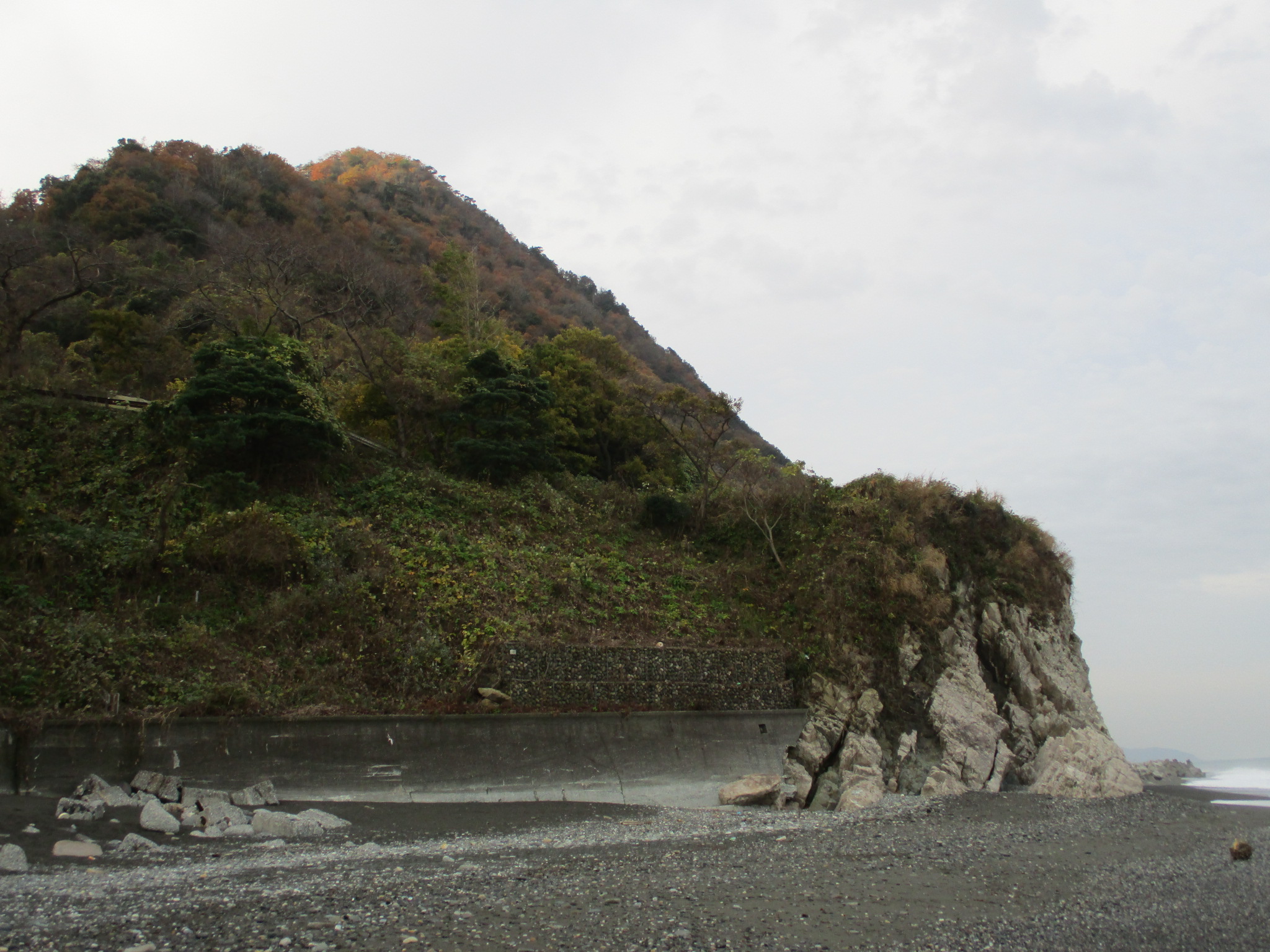 Katsuyamajō was constructed by Uesugi Kagekatsu in 1582 as a branch castle of Kasugayamajō. Garrison commanders included Suga Morinoshi, Akiyama Sadatsuna and Ogita Nagashige. It is said that Uesugi Kagekatsu met Toyotomi Hideyoshi at Katsuyamajō shortly before the latter's ascension to Kampaku (Regent) in 1585.

The layout of Katsuyamajō I had to map out myself, finding no map beforehand. From my crude sketch I can relate that there is some terracing with boulders along the winding, steep route up to the castle site. The shukuruwa (main bailey) has dorui (earthen ramparts) to the rear, as well as a sign post for the castle. There is a view of the Japan Sea with a pine tree at the side of the bailey. Behind the shukuruwa is a horikiri (trench), and then a sort of lower sub-bailey beneath the ridge which extends beyond there. The ridge shelters this middle enclosure. Beyond that is the furthest bailey, which is also quite large, and has dorui formed from the ridge around the north and west sides. Protecting the rear of this furthest bailey is a nijū-horikiri, or double trench system. With dorui, horikiri, and kuruwa, Katsuyamajō is a typical Sengoku period yamajiro (mountaintop castle), and a good example of a medium sized one. Katsuyamajō was a far flung coastal shijō (branch castle) of Kasugayamajō.

Itoigawa is famous for being the location of Japan's "Jade Coast", and is the site of the world's oldest known ornamental jade culture. Although the town centre itself chose to destroy its beach with a by-pass in the 1970s, the coast north and south of town is made up of beaches of colourful pebbles, of which jade rocks are numerous. This is part of the "Itoigawa UNESCO Global Geopark". I descended onto the beach to get a good look of the castle mount of Katsuyamajō from below. There was a ball of something covered in barnacles. The barnacles were large and had gaping, fanged mouths with black, lolling tongues. The sand was as black as soil. Pebbles were strewn in long piles all along. My hometown is on a peninsula, and I am not unfamiliar with beach ecosystems, but, with the notable exception of the Tottori sand dunes, this was my first time visiting a beach on the Japan Sea, and I found it quite alien.

The trail to Katsuyamajō is very steep - but there are stairs and ropes - with many switch-backs. Anyone of reasonable health could struggle up though I think. It was quite unusual as I methodically plodded upward to have to my side not some dark forest or rural vista, but a clear canvas of grey and blue. I had the sensation of being much higher up than I was. The salty air which rose up was invigorating.

Retrieved from "http://jcastle.info/smw2021/index.php?title=Echigo_Katsuyama_Castle&oldid=49293"
Category:
This page was last edited on 30 December 2021, at 18:28.
Content is available under Creative Commons Attribution-NonCommercial-ShareAlike unless otherwise noted.
About Jcastle.info
Contact Jcastle.info