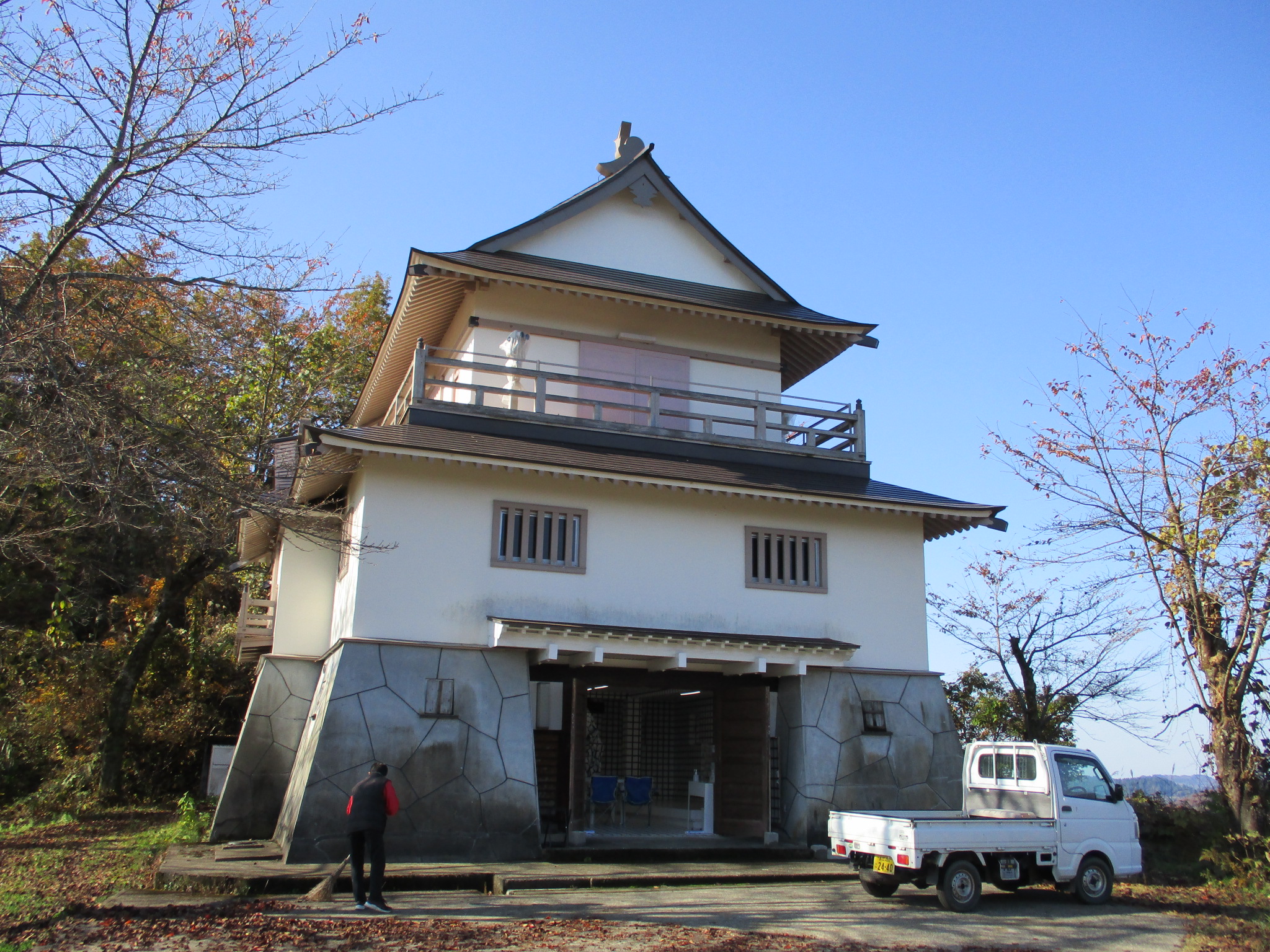 The origins of Echigo-Matsudaijō are unknown, but it is said to have been built by Kazama Sadakatsu, a vassal of the lord of Nōminejō, Kazama Nobuaki. During the hegemony of Uesugi Kenshin, Matsudaijō was part of a network of fortifications which linked Kasugayamajō to the Kantō region via Matsudaijō, Nōminejō, Ôjō and others. Matsudaijō served to guard this important route. It is thought that Matsudaijō was abandoned with the Uesugi Clan relocated to Aiźu.

Matsudaijō shares its written characters with the much more famous Matsushirojō (both rendered 松代城), and so as not to confuse the two sites the province name of Echigo (越後) should be prefixed in clarification. I figured this site for a boom era forgotten mogi-tenshu and didn't expect too much, but Matsudaijō offers a lot and is surprisingly easy to get to. Essentially the site is in two parts; the modern mock reconstructed castle tower, and the actual ruins of the medieval mountaintop castle.

Matsudai Castle is located in Matsudai Town, incorporated into Tōkamachi Municipality since 2005, and is known for its beautiful terraced hillsides of rice paddies, particularly at Hoshitōge. Railway came to Matsudai in the 1997 with the construction of the Hokuhoku Line, which, being a modern line, cuts rapidly beneath many mountains and is mostly tunnels connecting coastal Niigata with the Shinano River valley area. This helped develop the town as a travel destination with small markets and an art gallery near the station. It has also attracted the attention of the international art community, it seems, and between the castle and Matsudai Station are many large pieces of modern art and sculptures in the so-called Nobutai ("Field Stage") park which mixes rice paddies and "art". This made the hike up quite interesting, though I appreciated the rice paddies and trails much more than some of the art pieces intergrated into (or should I say segregated within?) them. I'm not sure when the park was developed. Some plots and trails are overgrown now, and some art pieces may have been removed or lost their details, but generally speaking things are in good shape. I arrived in Matsudai at 8:30, but from about 10:00 it's possible to get a shuttle bus or take a rental bicycle between the gallery and the castle. The bicycles I think are free and are also eletronically assisted for climbing the mountain road. But taking a combination of park trails and the main footpath means that the hike is anycase not a long or difficult one.

It is within the above expounded context that we find the mock castle tower of Matsudai Castle. Curiously it was built in 1981, so I'm not sure if there was a large tourist presence then or not, but the castle tower was built cheaply and probably intended chiefly as an observation tower. The tower cuts a pretty shabby appearance, even by mogi standards, but within is the soul of an artist! This mogi, which would probably be abandoned otherwise, has been given new life as a host to modern art installations! The first floor is so disjointed from the outside appearance of the castle that I was simply blown away. The entire first floor is the art piece. Probably we've all seen its like before, that sort of sickly confusion of geometry focusing a central "thing", in this case a gigantic scrunched up bauble. Yet within the husk of this old mogi it becomes quite the novelty, and the rear of the room has a castle style heavy gate which was part of the original mogi construction.

The top floor is tasteful and gives access to the veranda for views. But the second floor is my favourite. It has a golden teahouse. But first there is a corridor which wraps around, in nice wood, and the entry to the teahouse room is through a half door - like the teahouse itself. The teahouse is, as I say, golden, and has many beautiful images of nature adorning it. I suppose it's inspired by the golden teahouse which Oda Nobunaga built at Aźuchi Castle; is this small mogi not now a rival to Aźuchijō! The teahouse is veiled in dark which makes the gold effulgent; whoever designed this understood well aesthetic principles most ancient. The walls are gold with black streaks which evoke a deep bamboo forest, and the pathway is surrounded by dark pebbles which made me think of obsidian (I'm not a geologist). Although the teahouse itself cannot be entered, and so can only be appreciated from without, I was very pleased with it. I made many tours of the path around it in that room, and would've made many more but there were a surprising number of visitors pressing into the tower.

As for the ruins of the actual castle, Matsudaijō is has a very long profile which follows the undulation of the ridge of the castle mount. The main bailey is centrally located. Deep horikiri (trenhces) intervene between narrow baileys, especially to the rear of the shukuruwa (main bailey) and there are terraced and climbing baileys both along the central trunk of the castle and along various spurs. The carved earthen walls of the castle are incredibly tall. I followed a trail into the main bailey, but there was no trail beyond where the terrain was incredibly steep, a sheer wall of earth to navigate! Clearly most visitors to the castle ruins themselves still do not pass beyond here. I went the whole length of the castle, however, climbing up and down these trenches and terraces between baileys. After a final deep trench the castle's precincts begin to taper off where there is a farmed highland area which connects to the mountain, and where there is a pass cut for foot traffic beneath a swing up in the elevation I would consider to be the end of it.

I didn't explore several spurs of the castle at lower elevation because I was eager to get back to the mogi tenshu which was still being opened up by staff when I arrived. But I saw most of it, including all of the integral baileys and trenches along the ridge line, and was very happy with so much to explore, having expected little more than the mogi tenshu. I would say that this is a great site in its own right regardless of the mock keep even though it appears to be little explored except by dedicated yamajiro fans.

Retrieved from "http://jcastle.info/smw2021/index.php?title=Echigo_Matsudai_Castle&oldid=49291"
Category:
This page was last edited on 30 December 2021, at 18:05.
Content is available under Creative Commons Attribution-NonCommercial-ShareAlike unless otherwise noted.
About Jcastle.info
Contact Jcastle.info