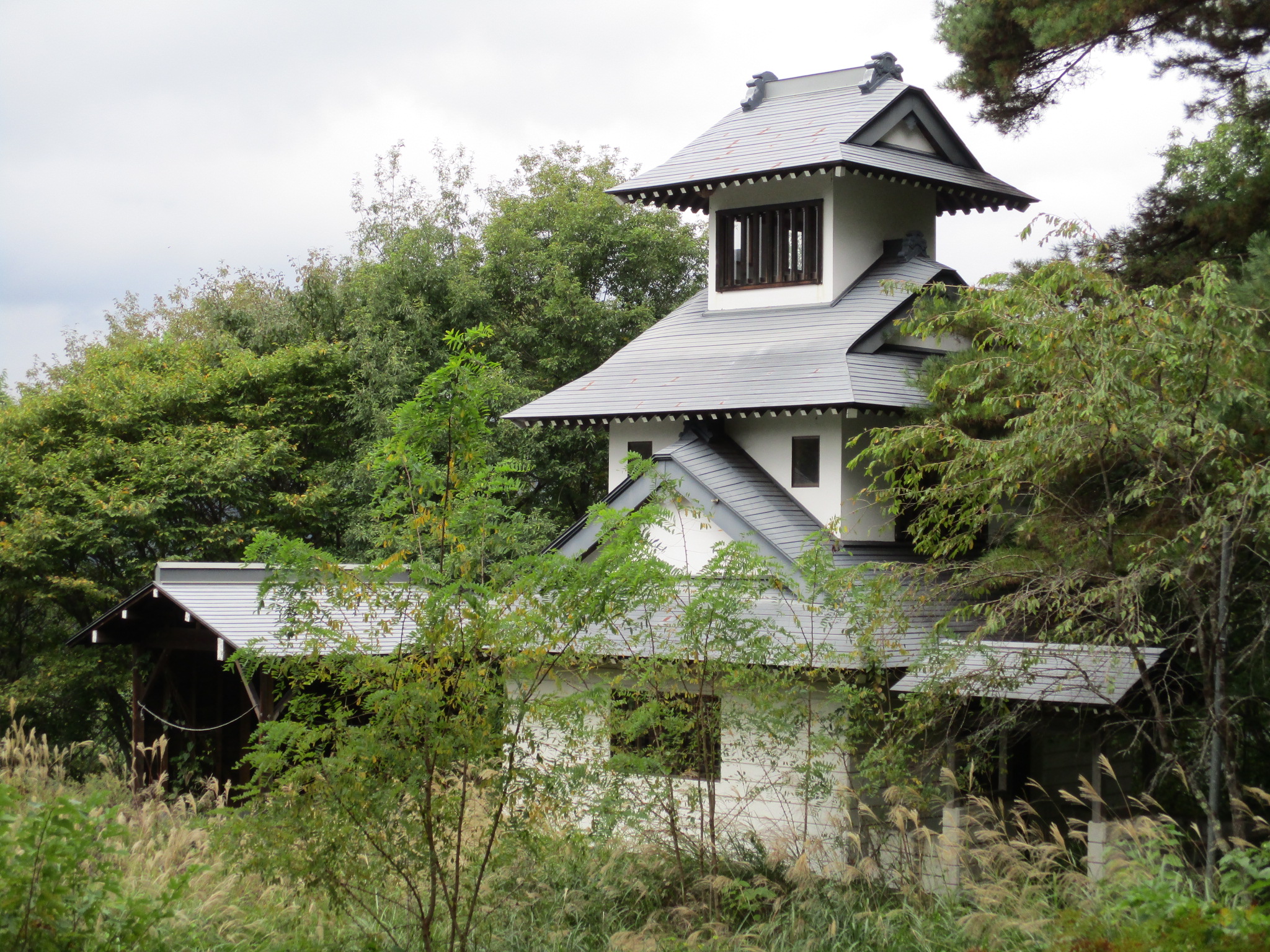 Kinasafurujō is said to have been constructed by Obinata Naotsune, head of the Obinata Clan, as his residence. It is said also to have been occupied by Obinata Samon who kept livestock in the area. Since Samon's residence was very nearby, this seems more likely to me. Considering the lack of opportunity for other forms of agriculture in the area, animal husbandry would've been an important source of wealth. The castle also guarded an important mountain path to Zenkōji. When Takeda Shingen advanced into Shinano his armies sought to secure transport routes to Uesugi Kenshin's territory, and the Obinata's territory came under threat. The coming of Takeda provoked a civil war within the clan between those who wanted to resist the Takeda and those who wanted to submit to and join them. Obinata Naotsune was likely killed by his own clansmen in this dispute. Obinata Samon likewise resisted Takeda Shingen and perished. It is thought that his residences, including Kinasafurujō, were destroyed at this time. The castle would've been poorly equiped to withstand a siege from Takeda's forces. Although it is sometimes said that the Kobinata Clan split in two in order to guarantee the preservation of at least one of its branches, and this tactic may have been used elsewhere, it seems to me that each faction was completely sincere in acting in the clan's best interest, and this led to irreconciliable bloody conflict.

Suddenly, out of nowhere, a castle tower!? There is a mogi (faux reconstructed) tenshu (keep) at the site of Fumimichijō, also called Kinasafurujō (Old Castle in Kinasa), and it may well just be the most well hidden mogi ever. That is fitting in keeping with Kinasa's feeling of a "hidden village" I suppose. Many people will find such local mogies when they see them from a distance, but the Kinasa mogi is hidden behind a thicket of tall trees and cannot be seen from below, plus there is lots of other terrain around so that not even the hilltop stands out. It's possible to come right by here, along the very road beneath the castle site, and never know of its existence. So it is a very special mogi.

The castle site is genuinely a historical ruin, but there's not too much to see. Castle features can be delineated, though, which is great. The castle essentially is narrow in profile following a ridge. There are two small principal baileys between the remains of trenches. In the lower of the two is a pit which I took for the remains of a well. There is a gazebo here. The site was developed as a park but it is no longer maintained. Even as one ascends to the main bailey there are many trees and it is not immediately clear to see beyond... what is that phantom flitting through the trees? The main bailey has a terraced sub-bailey beneath. Below this is a large, flattened area. Comparing it with the baileys above, there can be no doubt that this wide area is modern in origin, developed as part of the park. Coming clear of the trees we finally get a full view of the mogi.

The mogi is tripple tiered and slender, but is built to full scale. This essentially creates a very confined space within that functions as a glorified look-out tower. There is about a tatami mat's worth of space to stand at the top. But I'm getting ahead of myself. The park is no longer groomed, and the whole space surrounding the mogi is overgrown with tall grasses. Eventually I found the old stair way and made it down to the mogi's entrance. There is a sign here. It seems that following an earthquake in 2014 the building was condemned. It is unsafe to enter, but there is no lock, nor was there ever, with the public being free to enter at their will. Now the only difference is the sign saying the structure is unsafe and there is risk of collapse. I bore this in mind, but I had to look inside. Taking responsibility for my own decisions then, I found a structure covered in dirt and web, but not so long abandoned, with a rack of slippers for guests by the small entrance space. The wood neither seemed particularly old. But the structure did creak when disturbed. It was quite something to experience the very narrow structure. No historical structure that I can think of was built like this at a castle. A pagoda, perhaps, would be similar, but they were often not built to be ascended, and most don't have stairs.

Beneath the "park" is a wide tarmacked area with a building at the end, the Furusato Hall. It's convenient to park here. The hall is abandoned and swarming with hornets. This area was once, it is thought, a hall attached to the castle, and so the lord would've lived here, and not where the faux keep is. Realistically this small fort never would've been able to stand up to the armies of Takeda Shingen, which makes its fate the more tragic. An abandoned tower in an overgrown park overlooking a disappearing village? Who will keep its stories alive?

Retrieved from "http://jcastle.info/smw2021/index.php?title=Fumimichi_Castle&oldid=51703"
Category:
This page was last edited on 11 February 2022, at 03:56.
Content is available under Creative Commons Attribution-NonCommercial-ShareAlike unless otherwise noted.
About Jcastle.info
Contact Jcastle.info