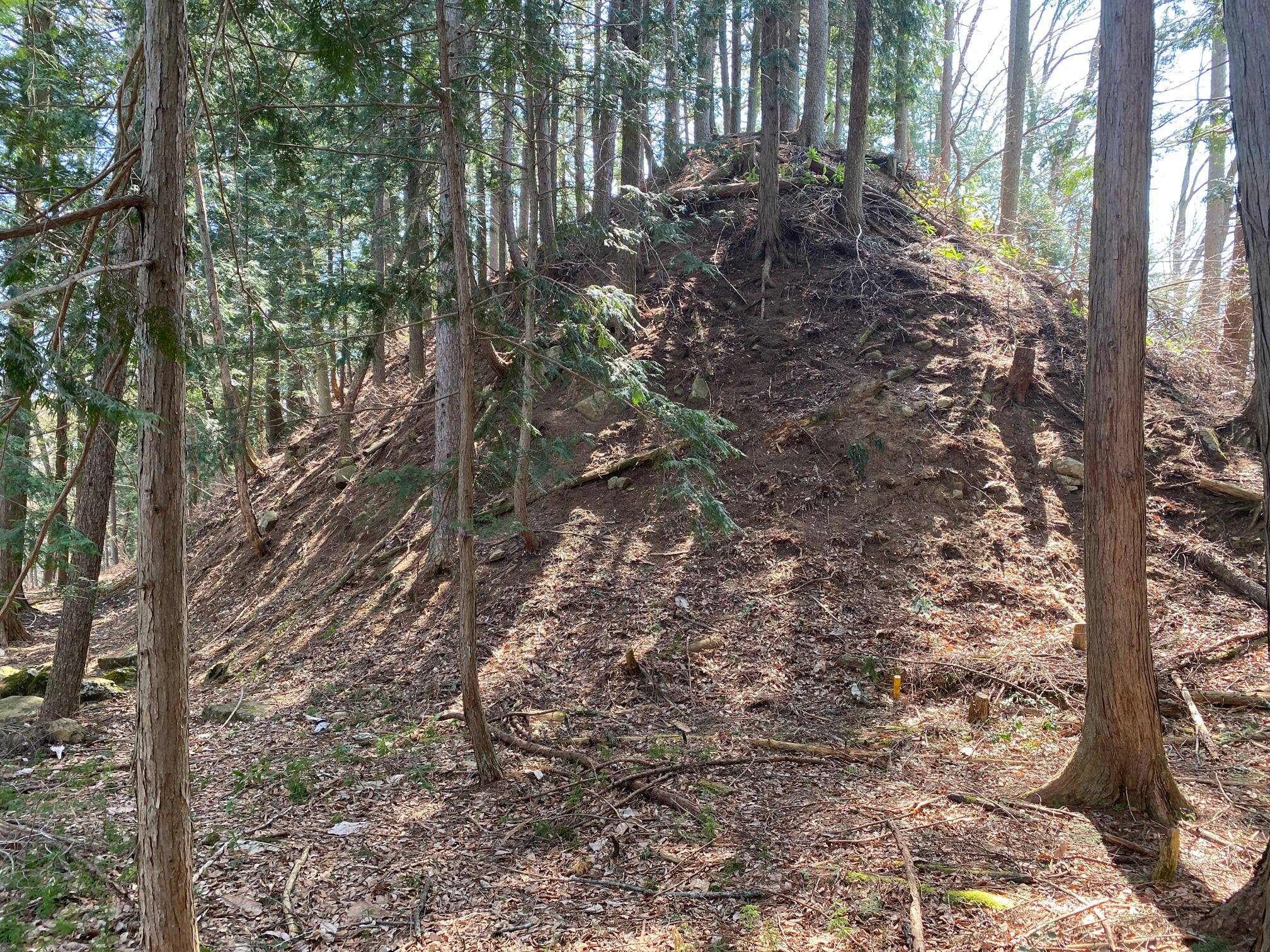 Furukawa Castle, also known as Hamaguri, or “Clam Castle”, was built in the mountainous Takano area of Furukawa-cho in Hida City, Gifu Prefecture. The castle site itself is just across the Miyagawa River south of Masujima Castle, at an altitude of 629 m.

The date of construction is not certain, but by the mid Kamakura period (1185-1333), the Anekoji clan held control of most of Hida Province, and so during the Nanbokucho period (1336-1644), Emperor Godaigo appointed the Anekoji as hereditary Hida provincial governors. The Anekoji were later defeated by the Kyogoku clan, the warlords of northern Hida, and so split into the Kojima clan (head clan) based at Kojima Castle, the Furukawa clan based at Furukawa Castle and the Mukou clan (also the Mukokojima clan) based at Mukou Castle.

According to the mid 1700’s compilation book, the Hishu Shi, it was the residence of one Furukawa Jiro in ancient times, and was later occupied by the former Uesugi vassal, warrior Shioya Chikuzen-no-Mori Akisada who had later served Oda Nobunaga. Shioya was killed in battle in 1583 in a dispute with the lord of Shiroo Castle in the Fuei-gun area of Echi-Chugoku. Later, when Kanamori Nagachika defeated the powerful clans of the Hida area, this castle became his first stronghold. His adopted son, Kashige the second head of the Kanamori family later took over Furukawa Castle, however, When Masujima Castle was completed on the opposite bank of the Miyagawa River in 1586, Kashige moved from Furukawa Castle and it was abandoned.

Unable to find an entrance or signs pointing to paths, I parked near a manure processing plant (Phew!) and started to climb from the northwestern base of the mountain. On the way up, I discovered a large defensive horikiri trench separating the castle from the mountain to the direct north. Taking the horikiri’s western section, and finally climbing to the northernmost bailey, I then discovered a small section of what appeared to be ishigaki, stone walling. (My belief was later confirmed by the information sign.) Above that was an obi-kuruwa, a narrow bailey surrounding the lower levels of the uppermost Shukaku, main compound. The obi-kuruwa is the result of creating kirigishi, increased embankments. Unable to climb the cliff-like kirigishi, I made my way along the northern edge of the obi-kuruwa to the compound below the main compound.

This lower centrally located bailey has a rudimentary uchi masugata koguchi, being a stone-lined indented “death-box” gate arrangement, by which intruders attempting to breach the gates can be trapped and fired upon from all angles. It also has a signboard with information on the castle layout, and the reason for Furukawa Castle’s other name being Clam Castle. It was so named because of an auspicious rounded stone about 50cm high discovered on the site, and covered in what looks like fossilized clams all around it. That stone is now housed in a small shrine-like hut in the bailey below the main compound, together with a recently erected sign and castle information board. This section is dotted with remnants of ishigaki stone walling.

The shukaku, main compound, is about 50m long, and 15m at its widest point. The northwestern section is raised about a meter higher than the rest, and is said to have been where the yagura watchtower was situated.

To the south is a relatively large baily with surrounding obi-kuruwa, and particularly the east facing the Miyagawa River are a number of larger and smaller baileys. The site features a number of horikiri trenches cut deep into the mountain ridges to prevent enemy approaches, and tatebori, vertical moats, to prevent lateral movement of attackers across the mountain. It is a mostly unknown site, not such a hard climb, and a great site for yamajiro beginners to look at and learn about the various defensive features.

Retrieved from "http://jcastle.info/smw2021/index.php?title=Furukawa_Castle&oldid=57112"
Category:
This page was last edited on 21 August 2022, at 11:00.
Content is available under Creative Commons Attribution-NonCommercial-ShareAlike unless otherwise noted.
About Jcastle.info
Contact Jcastle.info