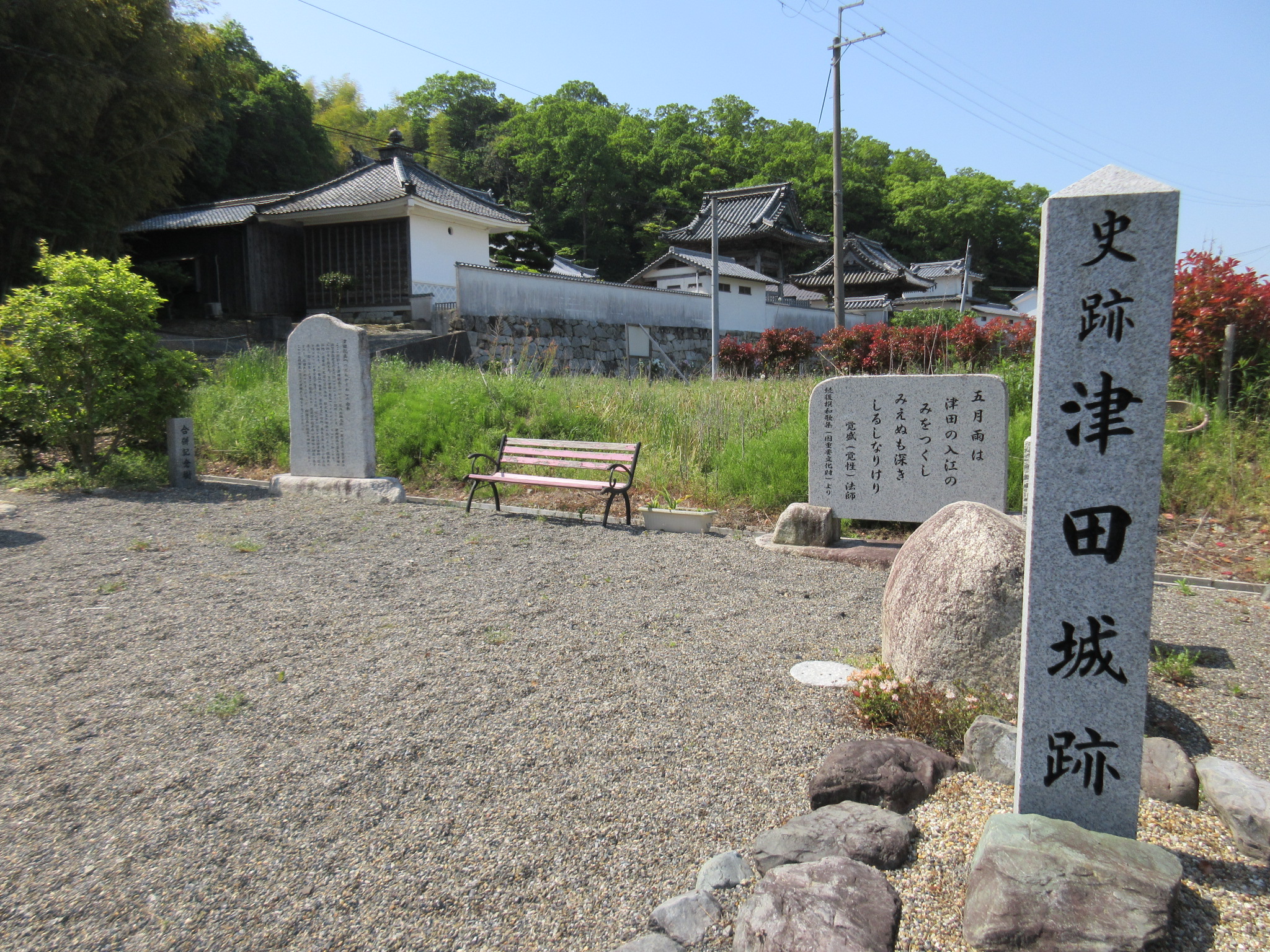 Minamitsudajō was the main residence of the Tsuda Clan. After the fall of the Heike Clan a young pregnant woman, by name Ajari, arrived at the hall. The child she carried was the son of Taira Sukemori, who had perished at the Battle of Dannōra in 1185. Ajari married a Tsuda clansman who adopted the child and named him Tsuda Chikazane. It is said that Chikazane was then adopted by Saibe Chikazumi of the Oda Manor in Echizen Province, and founded the Oda Clan which would give rise to Oda Nobunaga. However, Saibe Chikazane, who became the headpriest of the Oda Clan's ancestral shrine in 1233, was likely Chikazumi's own biological son, and he was still alive in 1258 when he left the priesthood (in 2011 a monument stone with his death date inscribed was found in Echizen and if he was the son of Taira Sukemori he would've been over a century old!). Saibe Chikazane was likely born long after any son of Taira Sukemori, and was unrelated to Tsuda Chikazane. Nonetheless the Oda Clan continued to associate itself with the Tsuda Clan, and established a Tsuda branch with such members as Tsuda Nobuzumi, who married a daughter of Akechi Mitsuhide and became the lord of Ômizojō, only to be killed by Oda Nobutaka under suspicion of disloyalty following the Honnōji Incident. Oda Nobunaga was keen to connect himself via the Tsuda Clan and Taira Sukemori to the illustrious Taira Clan, but it seems this was an attempt to fabricate a genealogy, a common practice in pre-modern Japan.

In the Muromachi period Minamitsudajō was part of a network of fortifications centred around Tsudajō which was governed by Wada Genba, a vassal of the hegemonic Rokkaku Clan. Jōkaku Tanbō, a castling blog based around Shiga, speculates that Minamitsudajō may have been the original demaru (outer bailey) of Ōmi-Hachimanjō. Other ruins such as terraces and trench-like structures have been found on the mountainside beneath Hachimanjō, but it's not known whether these are the ruins of Minamitsudajō or not. Minamitsudajō may have served as a branch castle of Hachimanjō or was developed over by its outer precincts; alternatively it may have been chiefly used as a residence at the foot of the mountain and abandoned at some point later. Hachiōji-jinja, Shinnenji, and the hilltop between them are considered to be within the precincts of Minamitsudajō, but it appears that the exact structure of the castle is not confirmed.

I visited Hachiōji-jinja and Shinnenji temple, finding markers for 'Tsuda Castle' and signboards detailing the history of the Tsuda Clan (particularly its folkloric association with Oda Nobunaga). There is a memorial garden to the castle and Tsuda Clan in the village of Minamitsuda opposite Shinnenji. Although I was following the Jōkaku Tanbō blog, I did not climb on the mountainside in the footsteps of my illustrious predecessor in an attempt to check for ruins there because I could not find a way up from Hachiōji-jinja. The hillside has been worked but it is unknown if these ruins are that of Minamitsudajō.

Retrieved from "http://jcastle.info/smw2021/index.php?title=Gamou_Minamitsuda_Castle&oldid=54335"
Category:
This page was last edited on 30 June 2022, at 13:21.
Content is available under Creative Commons Attribution-NonCommercial-ShareAlike unless otherwise noted.
About Jcastle.info
Contact Jcastle.info