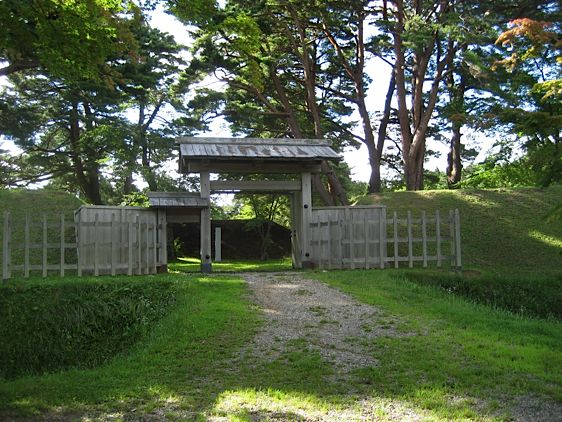 Hekirichi Jinya is located in the town of Hokuto, at an elevation of 70 meters up a gentle slope overlooking Hakodate Bay. It has four pointed bastions, but only the eastern bastion facing the bay is fully developed with 6 cannon ports. The two to three meter high earthen walls and surrounding three meter deep dry moat are well preserved and maintained, and the wooden front and rear gates have been reconstructed. Inside the fort, the foundations of the various wooden buildings that existed are clearly marked and identified (Japanese only). These included barracks, stables, bathhouse, kitchen, armory, granary and other structures that accommodated over 122 soldiers, officers and officials.

It is generally accepted that the Goryokaku fort in Hakodate, Hokkaido, is the oldest Western-style star-shaped fort in Japan. However, the Hekirichi Jinya, located about 8 miles to the northeast, was completed in 1855, two years before construction on Goryokaku began.

All text and photos donated by RonS.

Retrieved from "http://jcastle.info/smw2021/index.php?title=Hekirichi_Jinya&oldid=49254"
Category:
This page was last edited on 23 December 2021, at 13:02.
Content is available under Creative Commons Attribution-NonCommercial-ShareAlike unless otherwise noted.
About Jcastle.info
Contact Jcastle.info