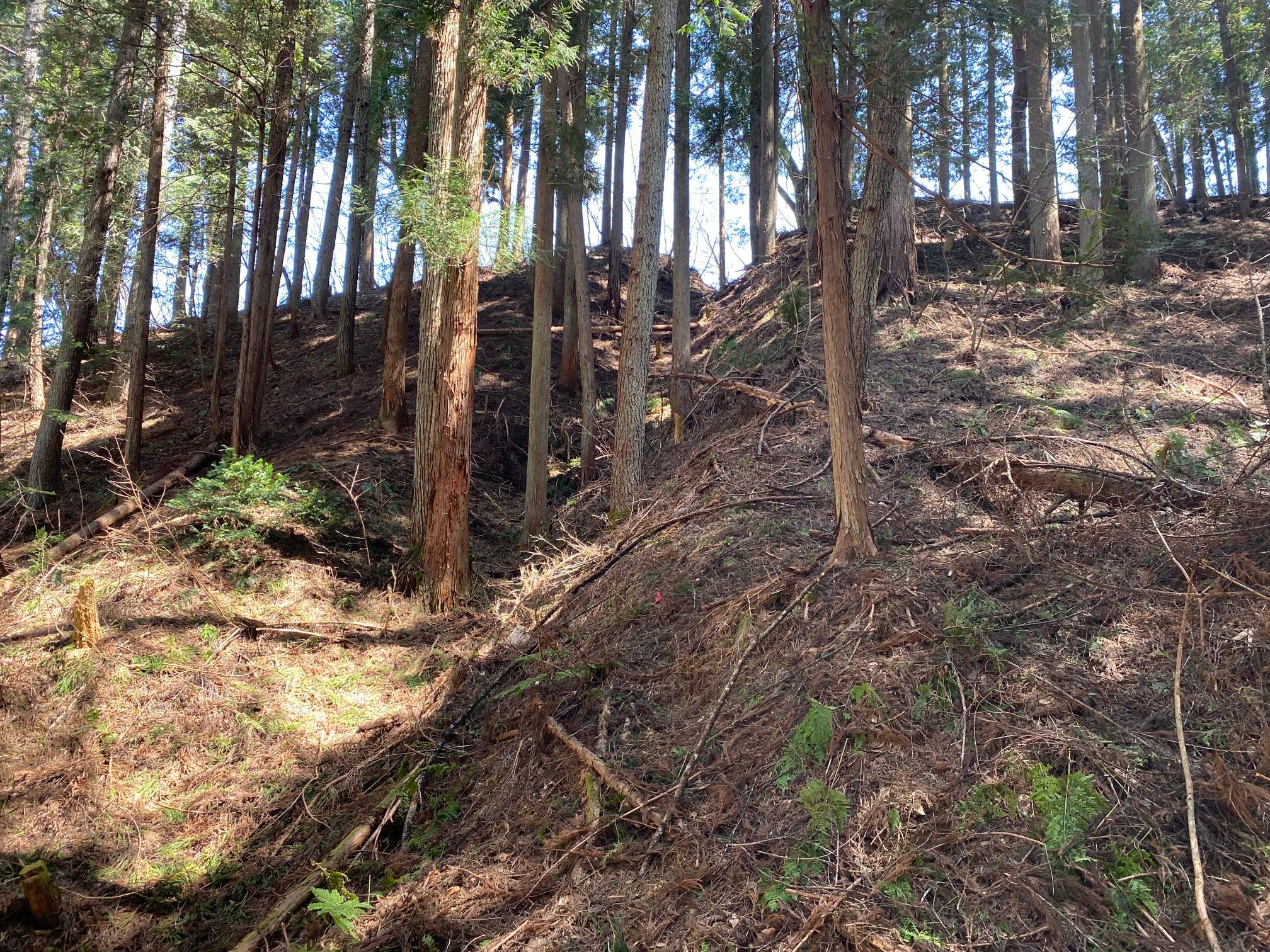 The date of construction is uncertain, but it is believed that Hirose Sakon Toshiharu moved from Yamazaki Castle in Hirose to nearby Takado Castle during the Tenbun period (1532 – 1555), and then built re-built Hirose Castle again. Hirose is also known as Tanaka Castle because it was defended by his vassal Tanaka Chikuzen Yozaemon Moriyuki.

This was a mountain castle of the Hirose clan built on the eastern edge of the mountain ridge where Takado Castle is located. It is listed as Tanaka Castle in the Bishu Shi (The History of Bishu) and was "formerly called Hirose-no-jo-to". It is listed as 'Tanaka Castle' in the Hishu Shi, which states that it was 'formerly called Hirose Castle' and 'Tanaka Yozaemon Moriyuki, a vassal of Hirose Muneshiro was made castellan at one point. At the foot of the mountain almost central to the castle grounds is Tanaka Yozaemon Moriyuki’s grave.

The Hirose clan initially cooperated with the local warlords, the Miki clan, but later came into conflict with the Miki clan through the Takeda clan. However, after the Takeda clan was destroyed and not long after Oda Nobunaga was killed, Anekoji Yoritsuna, AKA Miki Jitsuna attacked the Hirose clan in 1583, and both Takado Castle and Hirose Castle fell, and Lord Hirose Muneshiro, was killed.

Anekoji Yoritsuna then passed the reigns to his second son Hidetsuna, who retired and took up residence at Takado Castle and Hirose Castle. The castles were extensively renovated during Anekoji Yoritsuna’s reign. Hirose Muneshiro'’s son, Hirose Hyogoto Muneaki, had fled Hida and taken refuge with Kanamori Nagachika, lord of Ono Castle in Echizen Province, but when Kanamori Nagachika invaded Hida on the orders of Toyotomi (Hashiba) Hideyoshi, he accepted a leading role and forced the Anekoji, holed up in Takado and Hirose Castles, to surrender.

What an absolute ripper of a site! Hirose Castle is a Warring States period castle, located on a 620 m high mountain in Hida Takayama, Gifu Prefecture. It is the third largest castle in the Hida area after Takayama Castle and Matsukura Castle, and was the largest civil engineering work of its time, built by hand-carving up the mountain. The castle ruins make fine use of the U-shaped mountain ridges, and consist of 6 main kuruwa compounds. The Hirose Castle ruins were designated a Gifu Prefectural Historic Site in August 1970.

I parked the car at the local community center and walked to the first, northern most bailey. From there it is a short uphill walk south to the eastern most bailey. To your left is the protective mountain ridge, with some very impressive horikiri cut into them. Horikiri trenches were deep V shaped cuts made into the ridgetops, and down the sides of mountains to hinder the progress of attackers. Seen from below, these are enough to elicit a “Woa!” from the castle nerd…even if alone. The eastern bailey is defended on the eastern flank by 7 tatebori! Tatebori are vertical moats, used to prevent enemy from making lateral movements across the mountain side.

This is an exciting mountain castle to visit. Walking around the western most bailey, the nerd inside me squealed like a stuck pig! Had anyone else been in the vicinity, they would have been shocked! I surprised myself! Splaying out from the base of the compound, like petals on a sunflower, were 17 tatebori! Imagine building a sand-castle hill, then spreading your fingers wide, poke them into the sand at around the two-thirds mark, and drag your fingers straight down. The ridges left are like tatebori! Over 450 years old and these are still in very good condition. The problem was that trees and their shadows made it hard to get any reasonable photos. These tatebori are deep, and are interspersed with high dorui, earthen walls. Any attackers trying to breach the sides of the bailey would have to attack via these tatebori trenches. Being narrow V shaped trenches, the enemy could only approach along the trenches in single file, making them easy targets for the defenders. They would be watching their feet in the narrow crevices, not the defenders. Before they could get this close, they had to contend with a HUGE horikiri trench. Getting down to see this up close I climbed down,…(to be read “tumbled with grace,”…slipping on dead leaves) and found out the hard way just how effective some horikiri can be. Getting out of this one required an effort and a half!

The entrance to Hirose Castle is up the road in front of Jokaku-ji Temple near the Nabari bus stop. There’s a sign showing a map of the castle layout beside the narrow road. At the end of the residential area is the Gifu Prefecture Cultural Property Conservation Centre where I parked the car. From here, walk along the road beside the Protection of Cultural Properties Centre and follow the signs. Even the ones warning of bears.

Despite the many signs, I didn’t see any bears, but at one point lower down the mountain, near the northern bailey, a brazen tanuki racoon ran out in front of me, looked, yawned, and slowly waddled off. He wasn’t frightened by a castle nerd.

Retrieved from "http://jcastle.info/smw2021/index.php?title=Hida_Hirose_Castle&oldid=57106"
Category:
This page was last edited on 21 August 2022, at 10:05.
Content is available under Creative Commons Attribution-NonCommercial-ShareAlike unless otherwise noted.
About Jcastle.info
Contact Jcastle.info