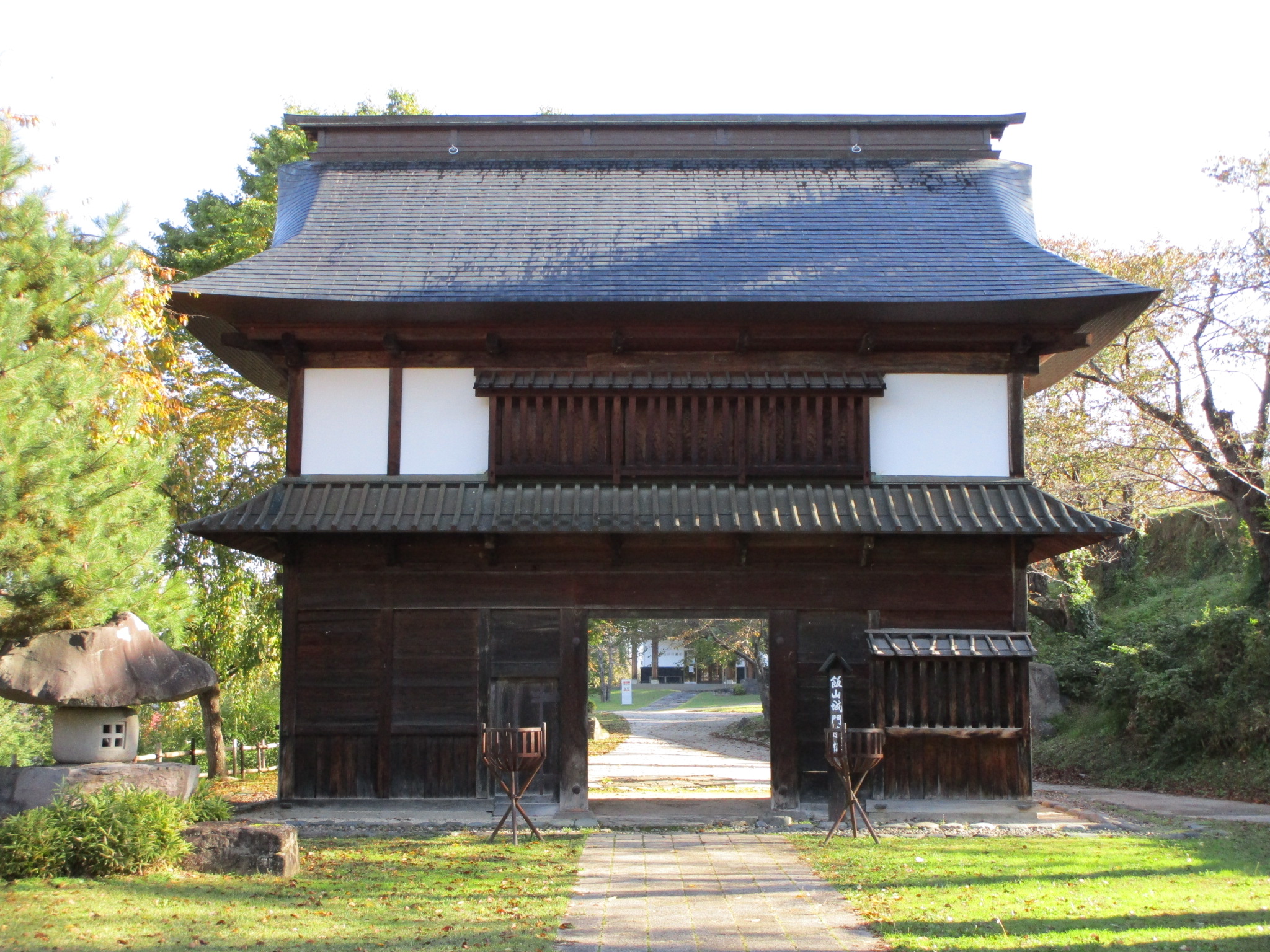 The first fortification on this hilltop site was built by the Izumi Clan in the Muromachi Period. In 1557, Takanashi Masayori retreated to this site when his fortified manor house, Takanashi-yakata (located across the plain at modern day Nakano), was attacked by Takeda Shingen.

In 1564 Uesugi Kenshin expanded the castle to serve in his skirmishes in keeping Takeda Shingen at bay in Shinano. Shingen had expanded from Kai into Shinano and regularly succeeded in encouraging Kenshin's vassals to rebel in Echigo and Etchū. Kenshin considered norther Shinano's protection vital in protecting his main territory of Echigo, but he was often occupied in fighting in other neighbouring provinces such as Noto and Kaga, as well as campaigning to help his allies throughout Kantō. As such, castles built by Kenshin in this area are rare. Kenshin made sure of the completion of Iiyamajō himself according to one account. From 1582 Uesugi Kagekatsu resided at Iiyamajō and Iwai Nobuyoshi commanded its garrison.

Under the hegemony of Toyotomi Hideyoshi, Ishikawa Mitsuyoshi controlled a large swathe of territory which included Iiyamajō. In 1598 Seki Kazumasa became lord of Iiyamajō, controlling a feifdom valued at 30,000 koku. In the Edo Period Matsudaira Tadateru was enfeoffed by the new Tokugawa Shogunate, his territory encompassing Iiyamajō, valued at 180,000 koku. Throughout the Edo Period various clans were appointed as castellans of Iiyamajō until 1717 when the Honda Clan took over for ten generations until 1868. In that year Iiyamajō was attacked by Tokugawa Loyalists who destroyed the castle in the Battle of Iiyama. Any survivng structures were either subsequently demolished or sold off as building materials.

Iiyamajō is a major Edo Period site, the former center of the Iiyama Domain. The castle ruins consist of both dorui (earthen ramparts) and ishigaki (stone-piled ramparts). The castle's footprint has been mostly preserved as a park, and the dorui is in great condition, being free of weeds and also restored to its original state in places, which regrettably we do not often get to see. The ishigaki is also nice looking and fairly tall. The main entrance to the main bailey is a masugata ("box-shape") gate complex formed from ishigaki. This gate complex only had a large rear gate, a yaguramon (turret-gate), and no forward gate. It seems there are plans to reconstruct this yaguramon. Another yaguramon has already been reconstructed in one of the castle's outer baileys, though it seems that it contains building materials from an Edo Period gate which was relocated away from either the castle (the castle possessed fifteen gates in all) or a high-ranking retainer's home, and served as a nagayamon (rowhouse gate) at a private citizen's home after the castle was decommissioned. So this gate is simply referred to as "rebuilt gate", though it is not a reconstruction of any one specific gate at the castle.

The honmaru (main bailey) is mostly surrounded by ishigaki and now possesses a shrine (elsewhere there is modern ishigaki but it looks okay). There are many other baileys, and integral baileys include the ninomaru (second bailey), sannomaru (third bailey) and nishinomaru (west bailey), the latter having restored dorui around it. Smaller baileys and outer baileys are also maintained. What was once an area for horses and stables is now a school field, but most of the castle can be accessed, having escaped modern re-development. Municipal structures on site include an archery range and martial arts hall, which I suppose is fitting. The town of Iiyama is also nice and has a small mountain town feel to it. There are many temples dating to the Edo Period at the foot of hills, and these can be visited if one takes a back road between Iiyama Station and the castle site, though the closest station to the castle is Kita-Iiyama. Everything can be seen on foot. The municpality also contains ski slopes and the first ski enthusiasts in Nagano were apparently from Iiyama, even practicing skiing at the castle!

Iiyamajō (飯山城) is one of what I'm now calling "the Big Ii Three", along with Iida Castle (飯田城) and Iijima Jin'ya (飯島陣屋), all historically valuable Edo Period sites in Nagano Prefecture that I have visited, all containing structures.

Retrieved from "http://jcastle.info/smw2021/index.php?title=Iiyama_Castle&oldid=42388"
Category:
This page was last edited on 19 November 2020, at 21:06.
Content is available under Creative Commons Attribution-NonCommercial-ShareAlike unless otherwise noted.
About Jcastle.info
Contact Jcastle.info