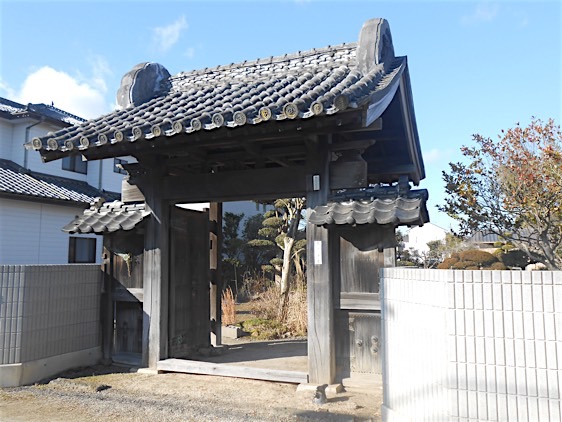 Izumi-jin’ya was built in 1668 by Naitō Masachika when Izumi was split off from the domain of Iwaki-Taira.

In 1702 the third generation of the Naitō clan, under Naitō Masamori, was transferred by the shogunate to Kozuke Province. He was replaced by Itakura Shigeatsu, at which time the fief was worth 15,000 koku. In 1746, Shigeatsu’s son, Itakura Katsukiyo, was transferred to Sagarajō in Tôtōmi, replaced by Honda Tadayuki. Because Honda had served as a member of the Shōgun’s council of elders, he was awarded with an extra 5,000 koku, brining the fief up to 20,000 koku. The Honda Clan ruled until the Meiji Period.

A gate from the original fort survives and is used as the entrance way to a private residence. The former fortification site is now a small park and marked with a commemorative stone marker. Back in its day the fort would’ve had a moat, which served as the main defensive feature, and a few small structures – long houses, storehouses and such.

The original site is a public park. The extant gate, which was moved a couple of blocks away, is on private property but wholly visible from the street.

Profile and photos contributed by AdamT

Retrieved from "http://jcastle.info/smw2021/index.php?title=Izumi_Jin%27ya&oldid=48650"
Category:
This page was last edited on 4 September 2021, at 18:25.
Content is available under Creative Commons Attribution-NonCommercial-ShareAlike unless otherwise noted.
About Jcastle.info
Contact Jcastle.info