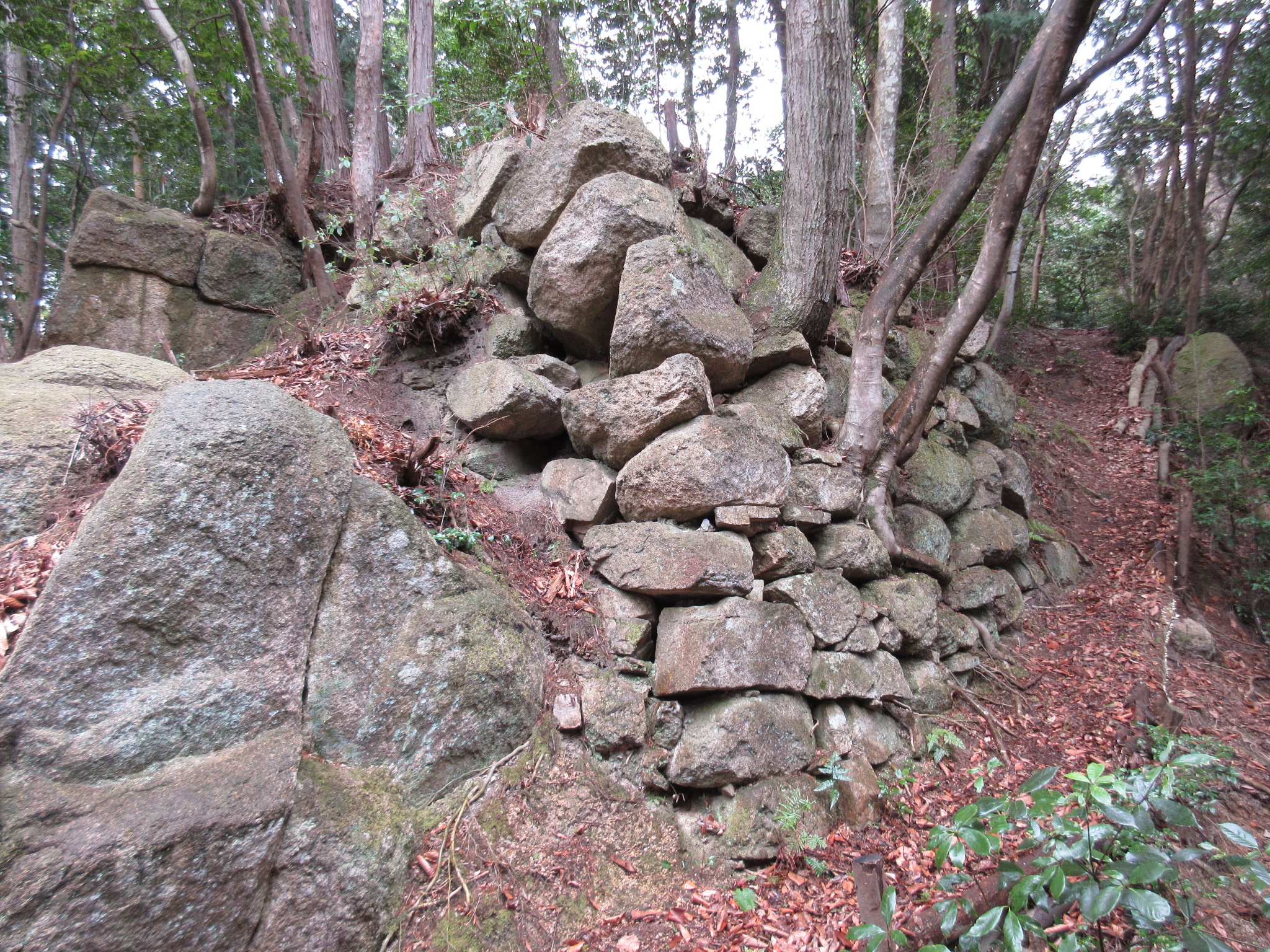 Koźutsumijō is thought to have been first built by the Nagahara Clan in the late 15th century when they were vassals of the Rokkaku Clan. See my article on Nagahara Castle for more information about that clan. The Tanaka Clan are also thought to have been castellans under the Rokkaku Clan. Koźutsumijō is a very large site and it has an advanced structure and defensive layout, which makes me uneasy about such an early date for its construction. In 1568 Oda Nobunaga invaded Ōmi and the Nagahara betrayed their Rokkaku masters. What if the castle's current layout dates to during or after this time period? It's possible, if not likely, that the castle was rebuilt either in preparation for Oda's invasion by the Rokkaku, or by Oda himself for the pacification of Ōmi, including Kōka, and Iga.

Koźutsumijō, also called Koźutsumishiroyamajō for some reason, was the main destination of my brief tour of sites in Yasu. It is an expansive yamajiro (mountaintop castle) with lots of ishigaki (stone-piled ramparts) and other interesting features. I think this site is not so well known despite its compelling ruins, but then it does have to compete in a prefecture / province full of amazing castle sites. What's intriguing about this site is that the topmost baileys appear as a fairly basic mountaintop fort, and most of the impressive sights are below.

When I first hiked up I identified the top baileys and thought 'is this it?' because I had expected a little more from what I'd seen online. If i didn't have a map with me I might've missed all of the best parts of the castle! It's not usual that the highest situated baileys at a castle are the least interesting. That said, the rear of the topmost bailey is a very steep track made up of large boulders. On my descent I completely missed it, and so I had to climb back up, but there is ishigaki between boulders around the side of this top bailey. Once I found this ishigaki I suddenly understood: this unassuming set of baileys is just the tip of an iceberg; the rest of the castle is around five times larger.

Although ishigaki segments can be found in a handful (I guess this means 'five or so') of places, the remains around bailey fourteen (there are a lot of baileys) are probably the most impressive. I say 'probably' because the map I was using had one bailey missing! According to another map, which admittedly is the one shown on the explanation board at the bottom of the site and so I am sorry to have not noticed the descrepency, there is another bailey with ishigaki. Guess I'm going back!

The main bailey, the largest bailey, also labelled 'bailey thirteen' on the site map, is in the centre of the castle, but also about half way up or down. It also has ishigaki ramparts. Above there is a sort of square gate complex ruin as the entrance to bailey sixteen. Beneath the shukuruwa (main bailey) is a valley flanked on either side by a series of small baileys carved into the ridges like a set of parallel giant steps. Following their respective ridges, these strands of terraced baileys get larger the higher they climb, and to the left and right (going up) there are twelve on each side. Although there is less ishigaki to oggle here I nonetheless was impressed by this array of climbing baileys.

The name of this site is a gosh-darn mystery. Jōkaku Hōrōki goes with こつづみ (kotsuzumi) whilst others go with こづつみ (Kozutsumi). Confused the heck of me. I went with the latter because it was most commonly listed and because it looks like a mistake, which means, by the twisted rules of Japanese, it must be accurate. Of course, linguistic morphology normally applies to the second mora in double 'tsu (つつ)', but Kozutsumi inverses this.

Retrieved from "http://jcastle.info/smw2021/index.php?title=Kozutsumi_Castle&oldid=53333"
Category:
This page was last edited on 5 June 2022, at 17:59.
Content is available under Creative Commons Attribution-NonCommercial-ShareAlike unless otherwise noted.
About Jcastle.info
Contact Jcastle.info