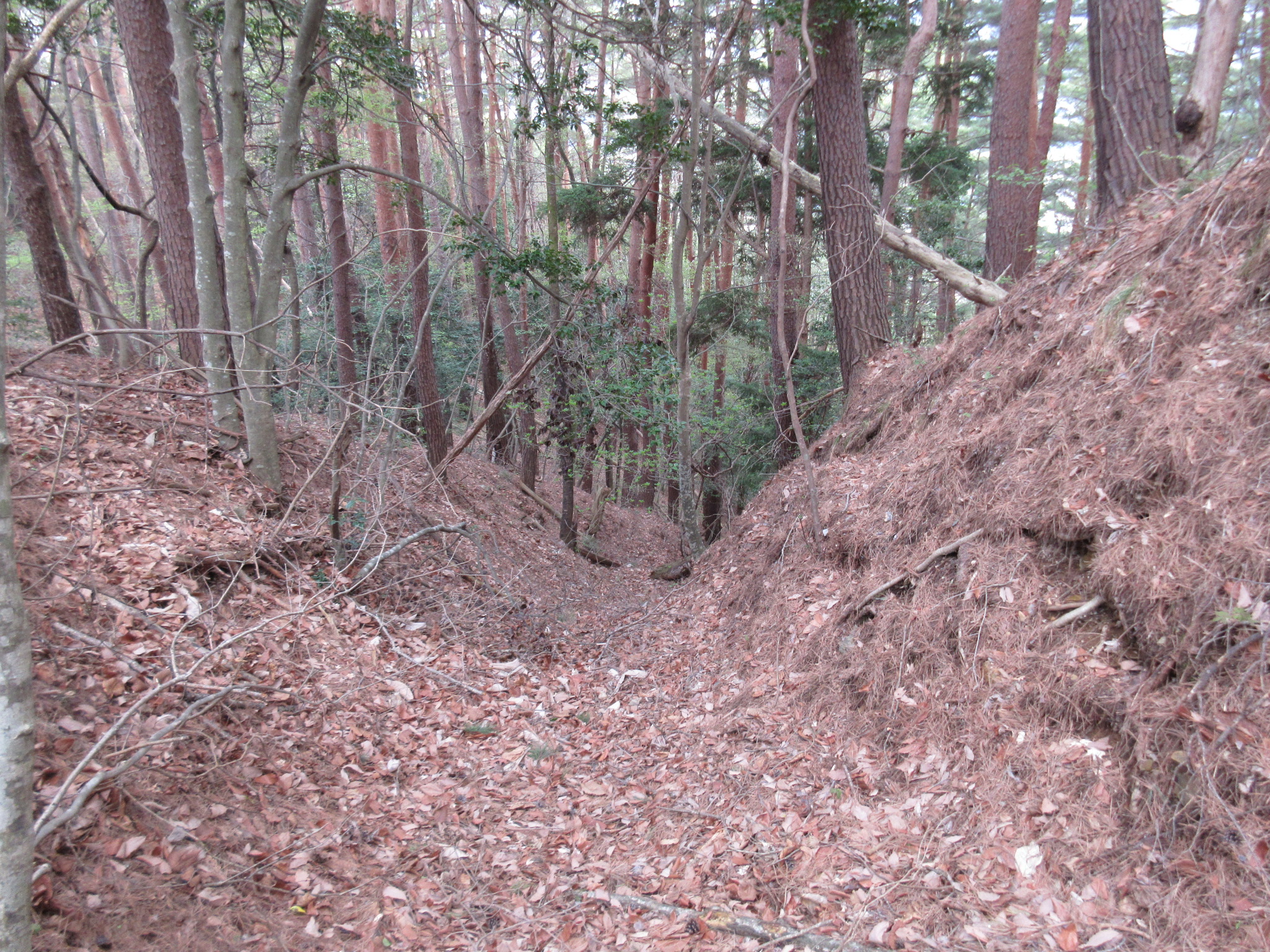 Marikoyama-toride is a minor fortification site but it was an important site for me to visit as it meant the completion of my coverage of sites in the Nishimaki Fortification Network, which contains at least fourteen sites (other Nishimaki Clan castle sites include Nakatōjō (Nakatou Castle)). The Nishimaki network includes yakata (fortified manor hall) sites, gakejiro (clifftop) fort sites, and yamajiro (mountaintop castles), including smaller sites called 'toride'. Marikoyama-toride, of course, falls into the latter grouping.

Marikoyama-toride is a small fort. It consists of a main bailey complex with a raised portion in the centre of the bailey. Beneath the main bailey on the plain side is terracing, and to the mountainside rear is a complex of trenches dug into the ridge and mountain slopes. Between a prominent horikiri (trench) and a series of tatebori (climbing trenches) there is an area which may have been a second bailey. The tatebori are fairly impressive and fall on each side of the ridge. There are two north-facing tatebori and one large south-facing tatebori with an angled turn toward the top where it eventually merges with a sunken path along the ridge. I did wonder whether these dropping formations, however, weren't natural, as they're quite large relative to the fort. Professor Miyasaka, 'God of Shinano Yamajiro', includes them in his nawabari (layout) map of the castle in 'Shinano no Yamajiro to Yakata (『信濃の山城と館』)', but is apparently also sceptical of their artifice. That said, two long depressions like this on either side of a narrow ridge would also be unnatural, and similar features are found at other Nishimaki Clan sites, so I was happy to treat them as tatebori. The shukuruwa is in anycase undoubtedly a fort ruin.

There is no trail to the castle and I had to just tackle the mountain head-on. I was quite surprised to see this site on shiro-meguri, since it's quite minor, but some mad lad (Ranmaru?) or other went up there in the snow, I think quite recently (article dated to March 2022, seen here: https://cmeg.jp/w/castles/3304/pins/35277), and the site also features on Google Maps now so perhaps it's the same uploader. I don't bother putting sites on Google since we have jcastle.info. I searched for this site on Ranmaru's blog as he has extensively covered the Nishimaki Toridegun, but he doesn't have a page dedicated to it specifically that I could find; though I thought he had been because he visited neighbouring Jōhikageyama-toride. There must be very few sites in Nagano which I've been to but that Ranmaru-sensei hasn't. Another site which covers Marikoyama-toride and which I used chiefly as a guide is the Yogo site (here: http://yogochan.my.coocan.jp/nagano/matumotosi04.htm). But Yogo-sensei didn't make it up to the fort site because he couldn't find a way up. Yogo-sensei famously does not like climbing mountains, which is funny because his website is dedicated to yamajiro. Indeed, the only way up to this site is to point one's body at the mountain and keep moving. Will power is required along with appropriate equipment (gloves, boots, &c). I heard many animals on the mountain and would recommend taking a bear bell... or a gun. One must necessarily be a romantic to enjoy sites like Marikoyama-toride.

Retrieved from "http://jcastle.info/smw2021/index.php?title=Marikoyama_Fort&oldid=55492"
Category:
This page was last edited on 17 July 2022, at 15:35.
Content is available under Creative Commons Attribution-NonCommercial-ShareAlike unless otherwise noted.
About Jcastle.info
Contact Jcastle.info