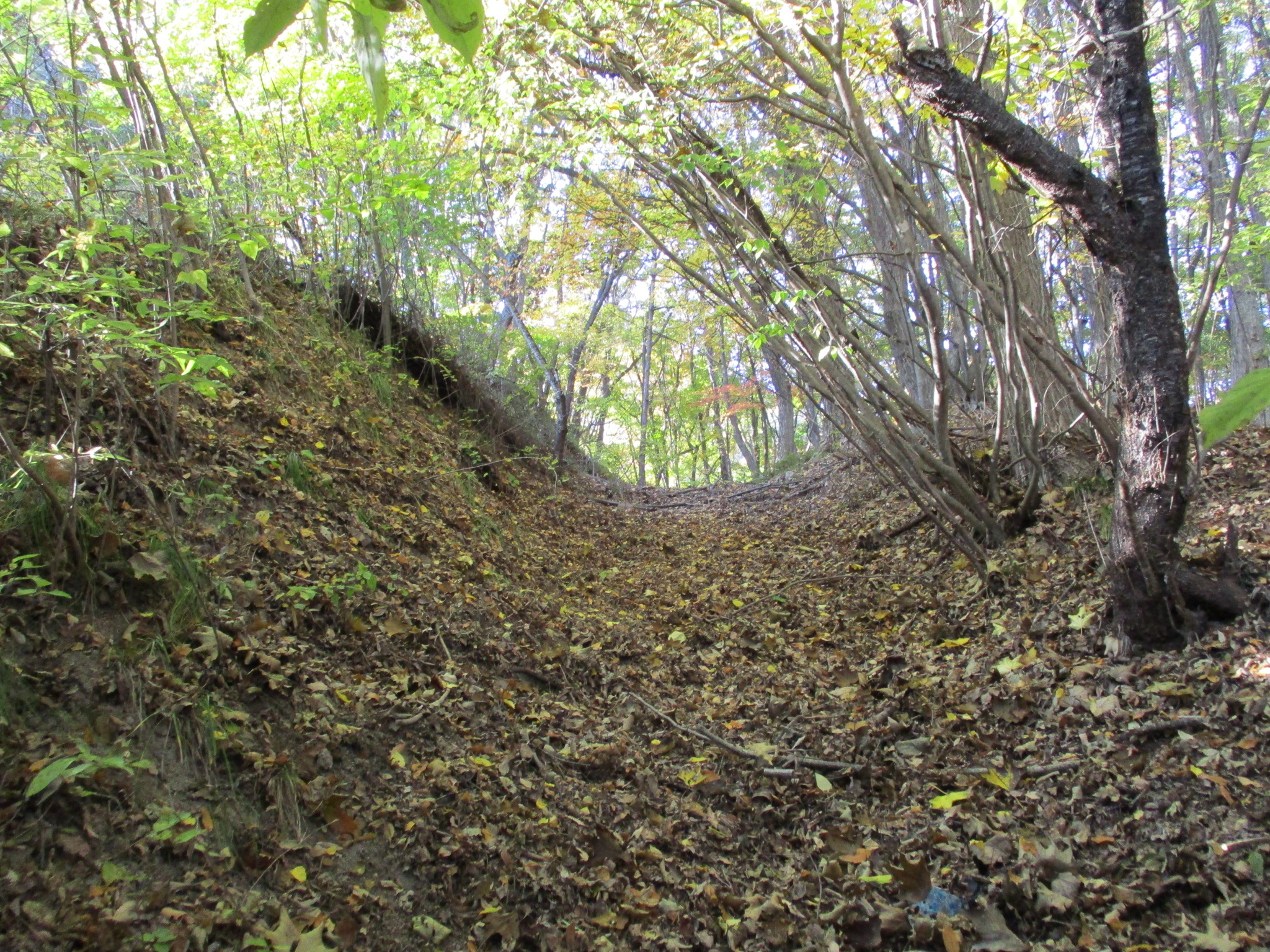 According to the Kansei Chōshū Shokafu (寛政重修諸家譜), Asahijō was first constructed in the early 15th century by Ogasawara Mitsutsune. When Ogasawara Mochinaga and Muneyasu fought for governorship of Shinano, Mochinaga defended himself at Asahijō and would go on to defeat Muneyasu at Urushidahara. In the 16th century Asahijō functioned as a branch fort of Asahiyamajō.

Asahijō is a fascinating site. I was primed for more mystery during the hike up and the ruins of Asahijō offer it. The second bailey, which I reached first, is surrounded by several tiers of terraced earth. Some of these are not well situated for defence, and so they may have been contorted for use as orchards in later times. At the edge of one such sub-bailey is a pit which looks like an excavated tomb. Things get more clear as one climbs. Just under the second bailey core there is a trench complex, a climbing trench which becomes a karabori (dry moat) in an angled box shape. Dorui (earthen ramparts) are piled around it. Whatver enemy came up to the castle via this trench would've fallen into a deadly trap. The second bailey is the site of another well preserved ancient tomb that the castle was built over. It seems the castle was carved out of these mountain tombs.

The first bailey is more standard and has a koshikuruwa (supporting bailey) beneath to the southeast, but between the first and second bailey is a huge karabori which appears to split the mountain in two. This is a piece of work to behold! Scattered around both baileys are the remnants of stone walls which would've encased the ramparts. It is suggested that the first bailey was also surrounded by dorui but that this was levelled when the shrine to Inari was built. I was surprised about how much this site offered even though it was only a satellite fortification of Asahiyamajō above. It's a wonder how many people even visit here; I missed it the first time because I had assumed Asahiyamajō and Asahijō to be one and the same site, perhaps understandably, but they're not. One should visit Asahijō too after hiking to Asahiyamajō.

The best way to go to Asahijō is via a road which leads directly to the shrine to Inari which the castle site now hosts. I ended up going around, up and past here though. Getting a little lost I came upon the abandoned village of Hirashiba. Although the area was inhabited since ancient times, I believe there is only one inhabited home left (I saw someone at a distance whacking fruit from a persimmon tree). Trying to get back on track I took an old dirt road past several abandoned homesteads, vehicles, rubbish and plots of land.

I came to a miraculous thing. It was a twin burial mound, or a single large mound with two burial chambers. As I said, this place is ancient. If you wonder that I am insensitive to how creepy sounds an abandoned village with ancient tombs yawning darkly from amidst the ruins, know I am not as scientific as all that, and although I had a sense of forboding I was morbidly drawn to explore the chambers. Well, it was just as one would expect, for inside I found the kind of Lovecraftian horror which sent Randolph Carter fleeing manically across the Big Cypress Swamp. Indeed. Cave Crickets! Giant ones with hunched, loathsome legs and throbbing stingers, scurrying on the underside of the lintel just above my head. Terrifying.

Retrieved from "http://jcastle.info/smw2021/index.php?title=Minochi_Asahi_Castle&oldid=49332"
Category:
This page was last edited on 30 December 2021, at 22:33.
Content is available under Creative Commons Attribution-NonCommercial-ShareAlike unless otherwise noted.
About Jcastle.info
Contact Jcastle.info