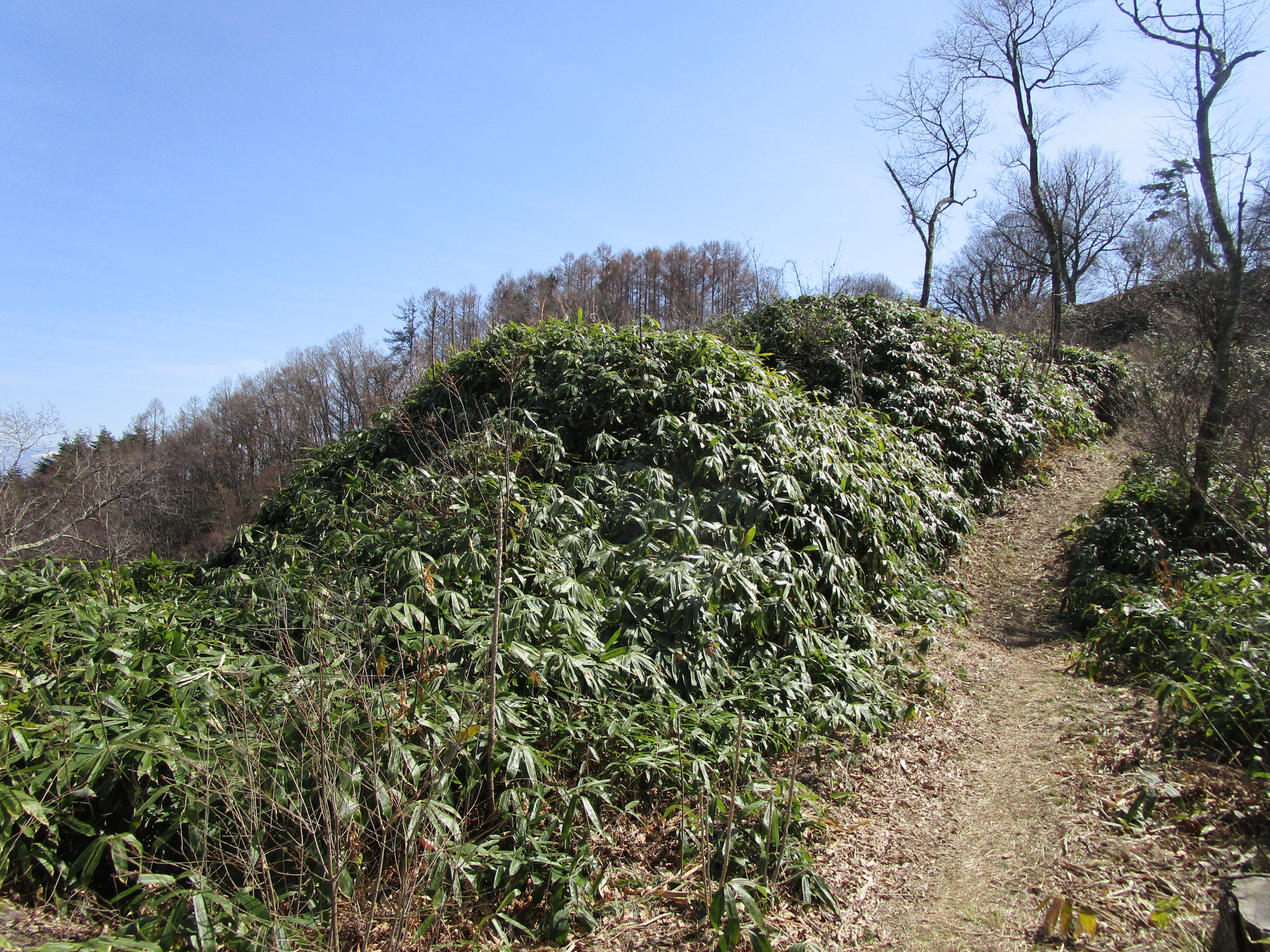 In a famous episode of Kenshin vs Shingen, Katsurayamajō was constructed by Uesugi Kenshin in 1555, following his capture of Yokoyamajō (Yokoyama Castle) adjacent to Zenkōji, in order to stop Takeda Shingen's push into northern Shinano. Katsurayamajō was directly opposite Asahiyamajō, controlled by the Kurita Clan, allies of Takeda Shingen. The Kurita's main base was located in the valley below near Zenkōji. Uesugi Kenshin captured this area and besieged Asahiyamajō using Katsurayamajō. A stalemate ensued, followed by a peace deal in which Takeda allies retreated from Asahiyamajō.

However, in 1557, Baba Nobuharu, a vassal of the Takeda, attacked Katsurayamajō, capturing it. This attack was said to have been particularly brutal. Firstly, the castle's commander, Ochiai Haruyoshi, as well as general Odagiri who arrived with reinforcements, were both killed in the battle. It is said that the heads presented to Takeda Shingen after the battle were piled up high, and that women sheltering in the castle flung themselves to their deaths from the castle-mount's northern cliffs.

After the 1561 Battle of Kawanakajima, Takeda Shingen pushed Uesugi Kenshin out of Zenkōji-Yokoyamajō, and also captured Katsurayamajō. The castle was given over to the lord of Naganumajō, located in the valley below. The contest over Katsurayamajō also split forces from Togakushi, who were renowned yamabushi warriors (or "ninja" if you want to believe that), between Uesugi and Takeda, with Uesugi's backers being forced to flee to Echigo. Yamabushi are usually associated with Takeda Shingen, particularly via Yamamoto Kansuke, though we don't hear too much of those that went to serve Uesugi Kenshin in Echigo.

I had to go to Nagano for stuff. Whenever I go to the prefectural capital I try to leave some time aside for some castling, since the town is surrounded by historic sites. This time I was torn between Katsurayamajō and Asahiyamajō. These two sites faced off against each other, with Uesugi Kenshin controlling the former and Takeda Shingen controlling the latter. I actually made first for Asahiyamajō but gave it up when I saw that the rear trail I wanted to use had been cordoned off due to landslide damage. Instead I went to Katsurayamajō, after visiting its satellite fortification, Yoritomoyama-toride (Yoritomoyama Fort).

Katsurayamajō is a great Shinano yamajiro (mountaintop castle) site. It doesn't have ishigaki - that I saw - but the earthworks are very engaging. A trail rises up the ridge from the satellite fort, and this has embankments on each side, a feature which is sometimes referred to as an Ôte. This may have been the historical path to the castle then too. I retain a fairly decent impression of the castle's general layout merely from wondering around. The main path goes presently to the main bailey area, passing beneath an undulating ridge striped with tatebori (climbing moats), and passing over small terraced baileys on the mountainside. From the main area of the castle are three major spokes. One is made up of a series of subsidiary baileys perforated by trenches, and the other is made up of fairly sizable terraced baileys with impressive embankments but without trenches.

The third spoke is the one I passed below on the climb up. This is a series of no less than nine horikiri (trenches). On closer inspection the first of these is a solid double moat, and one passes over this to reach the main bailey from the main path. Thereafter there are two sets of moat complexes. This feature of trenches in succession is called unejō-horikiri in Japanese, or "rib moats". This is a really impressive feature of Katsurayamajō, and is fairly well known amongst local yamajiro fans. I descended from this area, encountering many other earthworks, such as horikiri, tatebori, dobashi (earthen bridges), dorui (earthen ramparts), and the remains of wells.

You see the moats in my pictures here mostly covered in young bamboo. It seems the ruins have been periodically cleared in the past, but, of course, bamboo grows back quickly. Luckily the general form was still visible during my visit. You know at some point before the bamboo was cut back some legend of castling must've gone in there, plunging like a rat into a sewer drain, getting neck-deep in vegetation, practically feeling for the contours of the trenches. That's amazing. Apparently much of the entire mountain was fortified, carved piece by piece, sculpted from the very earth itself into an impregnable fortress. That's even more incredible. I followed a trail all the way down to another peak, which seemed to me to be suspiciously flattened, and vaguely terraced even, but it was hard to tell. Was this another part of the expanded fortification? Well, it's possible but I'm hardly about to claim my own discovered fort; the experts will have it mapped and noted somewhere. I can find no information on it, however. Anyway, this should give the reader a general impression of the expansiveness of the site and the excitement of exploring it.

The peak I found was Kannon Mount, but there actually is another satellite fort site of Katsurayama called 郷路山城 (Gourosan / Satomichiyama Castle). Will have to check it out next time i'm in Nagano.

Retrieved from "http://jcastle.info/smw2021/index.php?title=Katsurayama_Castle&oldid=58371"
Category:
This page was last edited on 21 October 2022, at 13:18.
Content is available under Creative Commons Attribution-NonCommercial-ShareAlike unless otherwise noted.
About Jcastle.info
Contact Jcastle.info