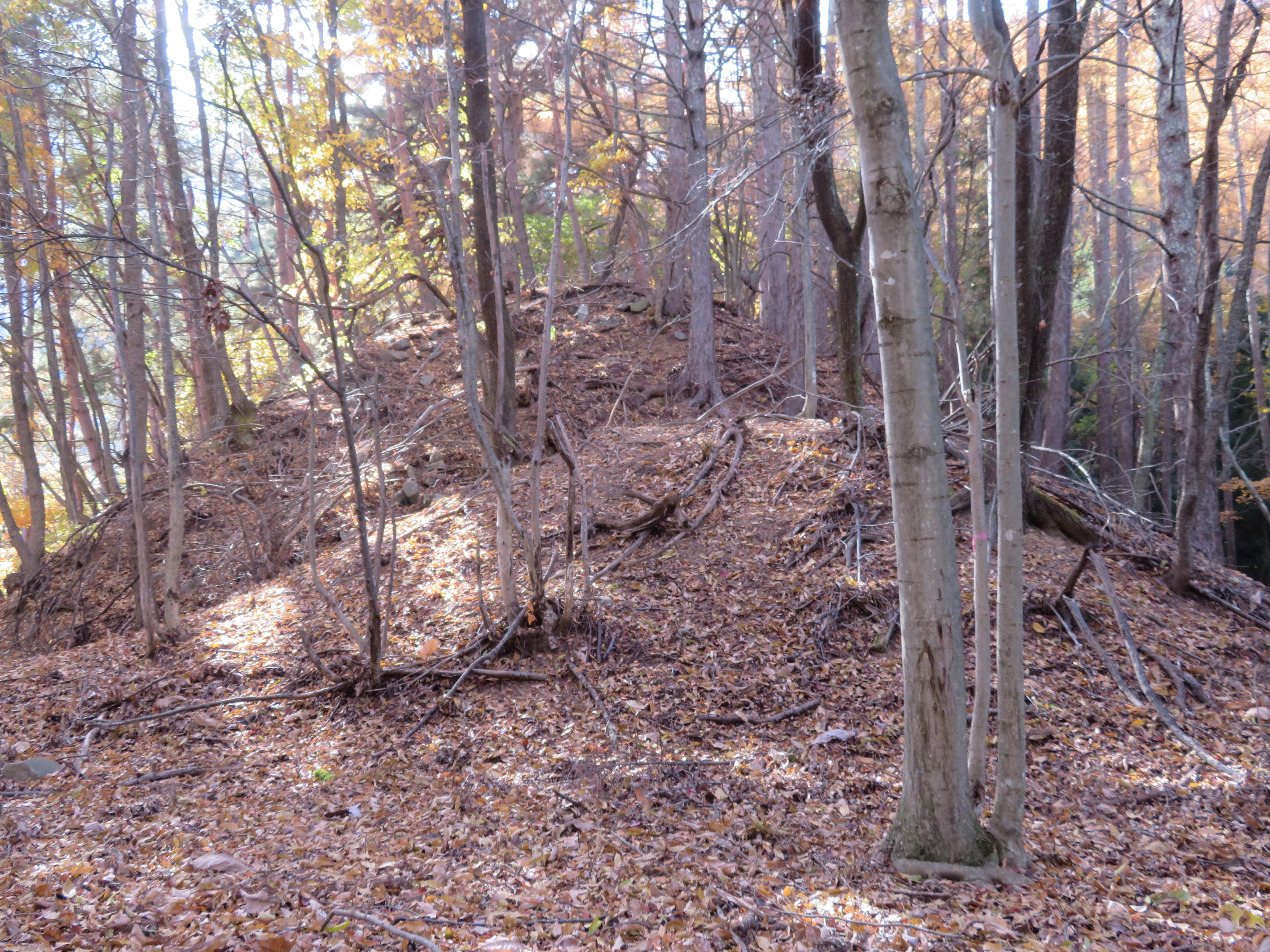 Miyaharajō was built as a branch castle of Yamabejō, and the two castles are located opposite each other across a narrow valley. It was controlled by the Orino-Yamabe Clan. Its history is shared with that of Yamabejō.

Exploring Miyaharajō demanded of me all of the dexterity and balance left to me from my ninja days. First of all I found a signboard with a big arrow pointing to the trailhead. This was easier than I had anticipated, although everything else thereafter was quite difficult. The arrow pointed to a path beside a rivulet which was overgrown and treacherous with flattened reeds. At a point I was required to hop over the rivulet. It wasn't so wide though. Then came a gate to keep in wild animals, but it was bolted shut. After failing to find any way to open it I simply went over. A lateral bar supported the gate and I came up on top of it as though walking a tight-rope. These fences are fairly lightweight and it wobbled as I prepared to jump down. I made sure to leap so as to not get ensared by it, and landed in a soft area of grass between rocks I had picked out, though I landed heavily on my feet, having no desire to roll onto the rocks, and this gave my insides the kind of shaking I remember from jumping off rooves and walls as a kid. It was a sensation simialr to rolling one's stomach, which was all well and fun as a child, but induces sickliness now. Here my bear bell came off and I had to go back and search for it when I realised.

The trail to the castle went past some old rice paddies, long since dried up. There was ishigaki (stone-pilings) here, or the remants thereof, and here and there it could be seen, presumably of considerable age, some of it covered in lush moss. These terraced open areas seemed too big and too low down from the actual castle to be usual of sites in the area, but I didn't wonder, because of the stone blocks all strewn around, if I wasn't looking at some kind of medieval residential area for bushi, and I was reminded of Ichijōdanijō. However, no resources mention such a thing and so long-abandoned rice paddies is the best explanation. The stone terraces were probably built in the Edo Period and incorporated stones formerly used to clad ramparts at the castle above. Some stones are still scattered about up there, particularly on the eastern side of the main bailey. The ishigaki even extended down to the river, making for some beautiful scenery, though hard to get a good view of.

The path continued, sometimes quite perilously, alongside these old paddies, if indeed that's what they were, and mouldering pilings of stoneblocks extended even further on than that. I came to a clearing just beyond a point below the uppermost bailey of the castle ruin because the ridge extending down here looked manageable. It was next to a large trench. Gradually I climbed up, using trees when I could to latch onto them, and otherwise progressing in a zigzagging fashion. Eventually I got high enough to cross the trench and clamber up into the uppermost bailey. There are no trails to the castle ruin itself. One just has to pick a good place to directly assault the slopes. Coming down is usually more dangerous under these conditions, and once again I made use of trees, hopping left or right from one to the other and using them to stop myself falling down. Once I got low enough though the terrain became less steep and I shouted "geronimo" and ran into one of the cleared terraces, running half way across it before I could slow down. And so that's the kind of adventure it was! I cannot recommend it for everyone.

Miyaharajō is probably the only yamajiro (mountain castle) that I have explored by starting at the very top and going down. Probably I could've found a better route up after all. The trench I first entered is to protect the top of the castle. Only the natural mountain extends beyond that. Here is the uppermost bailey. There is a triple trench system after this, protecting the shukuruwa (main bailey). Beyond the shukuruwa and another trench a second and third bailey are present amongst terracing and embankments. A final trench separates these integral baileys from a series of stair-like mini-baileys descending the ridge at odd angles.

Retrieved from "http://jcastle.info/smw2021/index.php?title=Miyahara_Castle&oldid=33558"
Category:
This page was last edited on 6 February 2020, at 23:40.
Content is available under Creative Commons Attribution-NonCommercial-ShareAlike unless otherwise noted.
About Jcastle.info
Contact Jcastle.info