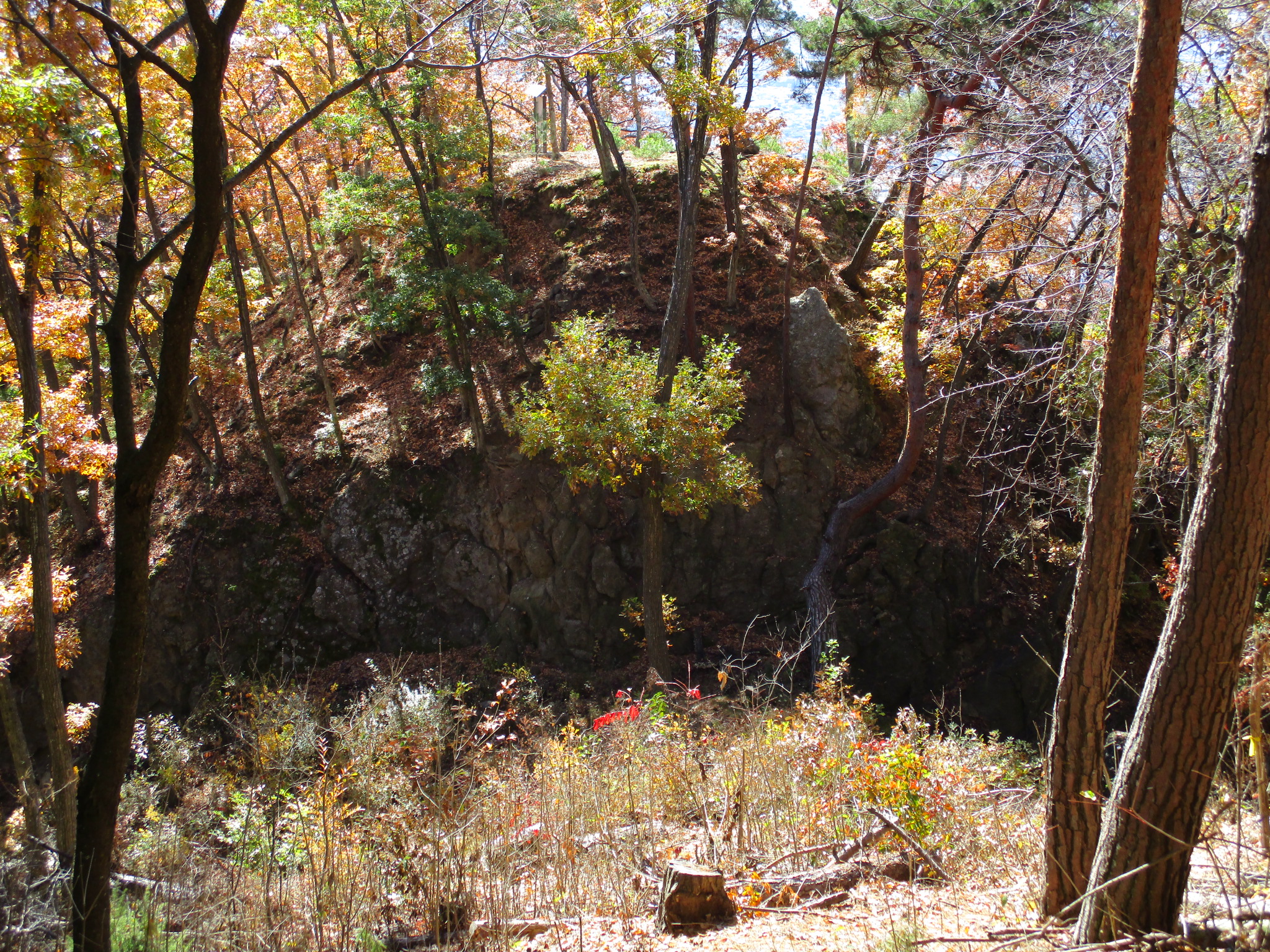 Iiźunajō was part of the Murakami Renju Toride-gun, a “pearl necklace” or network of castle sites protecting territory of the Murakami Clan. Iiźunajō was on the edge of the complex immediately surrounding Kokuzōsanjō, and one of the most robust forts. There is some speculation that it was built over the ruins of an older fort used by local samurai. In that case the centre of this former fort was likely in the second bailey, and the Murakami expanded the castle north and south of here by carving up the mountain, making the higher main bailey the new centre of the castle. The lower portion of the main bailey is not unlike an umadashi (barbican). Please see my profile on Kokuzōsanjō (Murakami Kokuzousan Castle) for more information.

Iiźunajō is a phenomenal site and I would rank it as the best site visited that day. Below Kameijō, the last fort on the topmost central ridge, Iiźunajō is located in a forward position to be somewhat independent of the other forts it protects on Mount Kokuzō. This was a formidable fort which could hold its own. Iiźunajō is easterly from Kokuzōsanjō, and Wagōjō in the west where the main ridge comes to an end likely had a similar position, but I would say Iiźunajō is the greater of the two. Its main features are the huge trenches carved into the ridgeline which cut through sheer rock, the very spine of the mountain.

Iiźunajō has four principal baileys. To the rear is the fourth, with two considerable trenches one after the other protecting its rear. Beneath the fourth is the first or main bailey complex, and it has three parts to it, an upper, middle and lower. The upper is separated by a terrace from the middle, and the middle from the lower by dorui (earthen ramparts). On either side of the lower portion, which contains a well ruin, are climbing trenches down the sides of the bailey.

The site’s most impressive sight is the large double trench system between the first and second bailey. Dorui is piled between two dry moats, and the trench on the side of the second bailey, which is situated above on its own small peak, is very deep, having been cut into the rock. This formidable arrangement, a solid stone wall hewn from the mountain itself, would’ve been deadly to attackers. The second bailey has dorui atop, and even some ishigaki (stone-piled rampart) remains.

Between the second and third bailey is yet another double trench system. Once again bare rock has been exposed and cut into, forming defences out of the body of the mountain. The third bailey complex is made up of an integral bailey and many sub-baileys beneath it which terrace the elevation. These terraces continue down the ridge continually and are interspersed with a fourth and final double trench system, and then a single lone trench before the castle’s precincts gradually taper off.

Iiźunajō can be accessed via two different routes. I took the route from the “former helipad”, now a parking area for hikers, which goes by old fields with stone-lined terracing up to a point on the ridge at the top of the castle site. The route that descends from there could also be taken from the bottom up. I got to the old helipad site by climbing up from Mochikoshijō to the Rabbit Pass, and them coming down again. The Rabbit Pass is the site of a humungous boulder which stands tall on the ridgeline which runs up to Mount Kokuzō. Climbing to this point rewarded me with stunning views. Probably though it would’ve been easier to go back to the bottom of the mountain from Mochikoshijō and re-ascend to get to Iiźunajō. Needless to say I regret nothing, though the hike down from the Rabbit Pass to the “heliport” was grueling. The steep sections lined with ropes meant that I basically went down the mountain backwards whilst clutching the ropes like an abseiler. At one point I gave myself too much slack and fell with my buttock right onto a cut stump a few inches across, which smarted, though a bottle of tea in my back pocket may have dulled much of the blow. My bear bell is still up there somewhere between the ropes. Then there came a series of interminable switchbacks beaten into a cascade of loose rocks which poured from some point far up the mountainside like a lava flow. In comparison to this the trail from the heliport to the castle ruins was a doddle.

Retrieved from "http://jcastle.info/smw2021/index.php?title=Murakami_Iizuna_Castle&oldid=49416"
Category:
This page was last edited on 31 December 2021, at 16:00.
Content is available under Creative Commons Attribution-NonCommercial-ShareAlike unless otherwise noted.
About Jcastle.info
Contact Jcastle.info