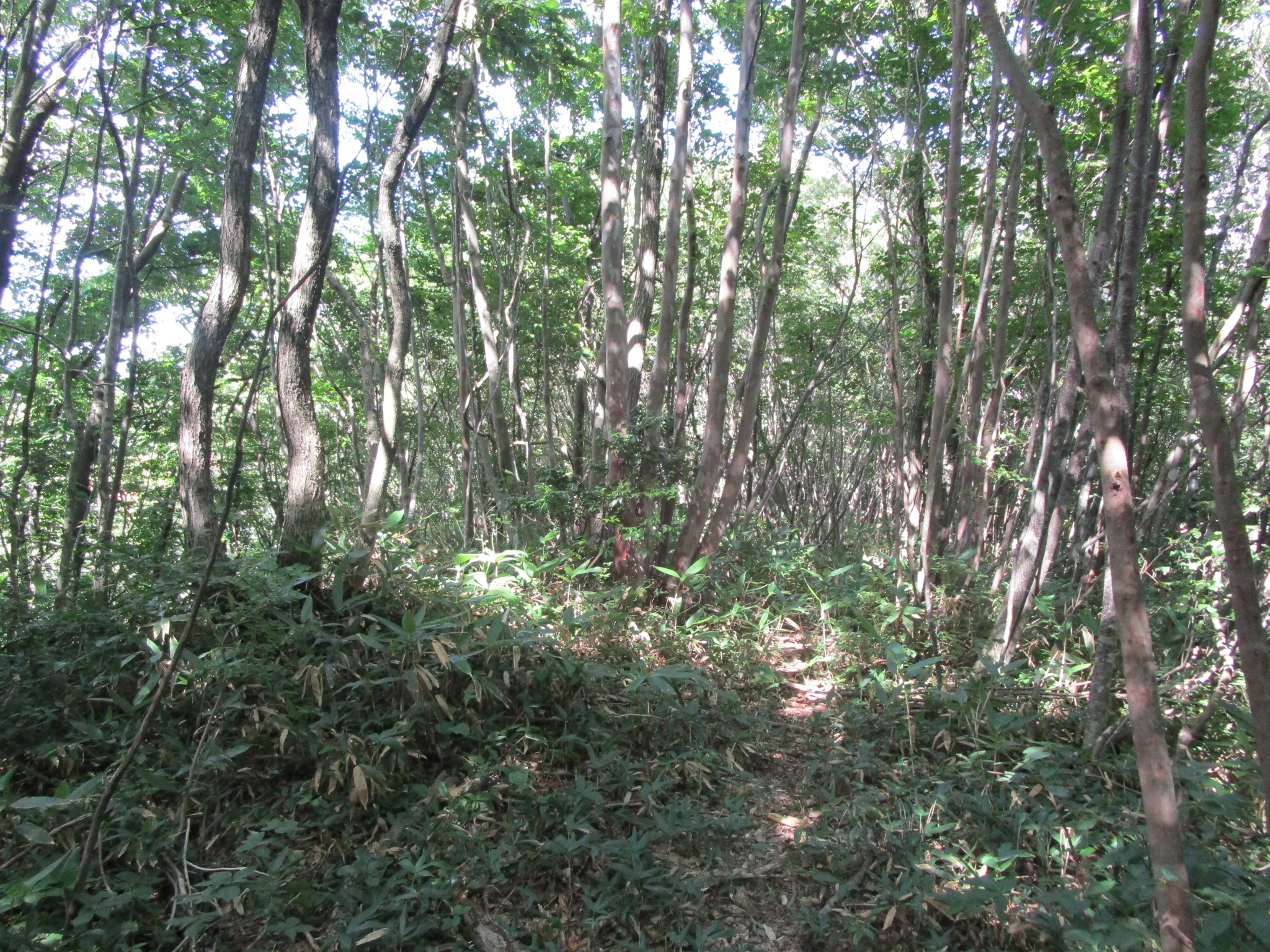 Nagaikeyama-toride was a branch fort of Kasugayamajō, the main stronghold of the Uesugi clan. Search "Kasugayama Castle" for more information.

I’d previously stopped by Tōjō-toride, another branch fort of Kasugayamajō, and Nagaike-toride seemed like it would be easy enough to climb up to if I could find the ridge, but the roads I intended to access the mountainscape by all proved blocked to public access. I was going in blind then. Anyway, my quick climb turned into a damned slog. I couldn’t make the ridge without first passing over a many obstacles. Where there should’ve been a road or footpath was nothing but forest (I also had conflicting information on the lay of the land). Eventually I made the ridge, but it was so overgrown with skinny trees that it was like “swimming” through the trees, one arm in front of the other in a mad crawl. Eventually I made it to the fort site. There was very little to see at the summit.

The whole thing seemed like it had been a foolhardy escapade to waste my own time. I had two options at this point. Continue on to Kasugayamajō, which I had intended to do if I had the time, or descend. But I had ran out of time and, frankly, energy by this time, and, though Kasugayamajō is probably fine to explore in summer, being well maintained, I decided I’d call it quits since I’ve been before and would rather return in autumn. Plus the trail ahead seemed no more clear than where I had ascended from, which was grueling. I decided to skip the main site and move instead immediately onto the site of the Uesugi-yakata, the fortified manor house of the Uesugi Clan, also known as Otate.

Descending from the fort’s main bailey then, I found a much clearer trail. After this my mood brightened. In descending I was also able to identify, and reasonably photograph, earthworks of the old fort, including embankments and earthen bridges. Finally I had something to show for my efforts! (The ridge I came up by had some terracing but the dense flora made photographing this impossible.)

The trail almost emerged in a park, but not before it was swamped by thick bamboo, forcing me to go back over steep terrain, and I got stung by a plant as a parting gift from the mountain, but luckily not badly. The park I emerged in, coming out of the woods like some shambolic bigfoot, was beautiful, and it is apparently a top autumn foliage-viewing site. I caught my breath here and dried out. The park is on the hillside and seems to have been worked into a series of trenches terminating in a flat area where the bamboo blocked my path. I couldn’t figure it out; was it an extension of the fort? Another fort? Something else entirely? There are over a dozen branch forts of Kasugayamajō, and dozens of satellite castles. It could easily have been another site, but despite the mind-numbing vastness of this network of fortifications, very little information is readily available about the outer environs of what is arguably the most famous medieval yamajiro (mountaintop castle) in all of the land...

I did myself near ugly then but I managed to explore a small part of the fortified network which protected the Uesugi heartlands, and plant my metaphorical flag on a lonely peak. It would take many days and much hiking to explore all of the branch forts. One day I might put together an expedition!

Retrieved from "http://jcastle.info/smw2021/index.php?title=Nagaikeyama_Fort&oldid=48833"
Category:
This page was last edited on 18 October 2021, at 13:43.
Content is available under Creative Commons Attribution-NonCommercial-ShareAlike unless otherwise noted.
About Jcastle.info
Contact Jcastle.info