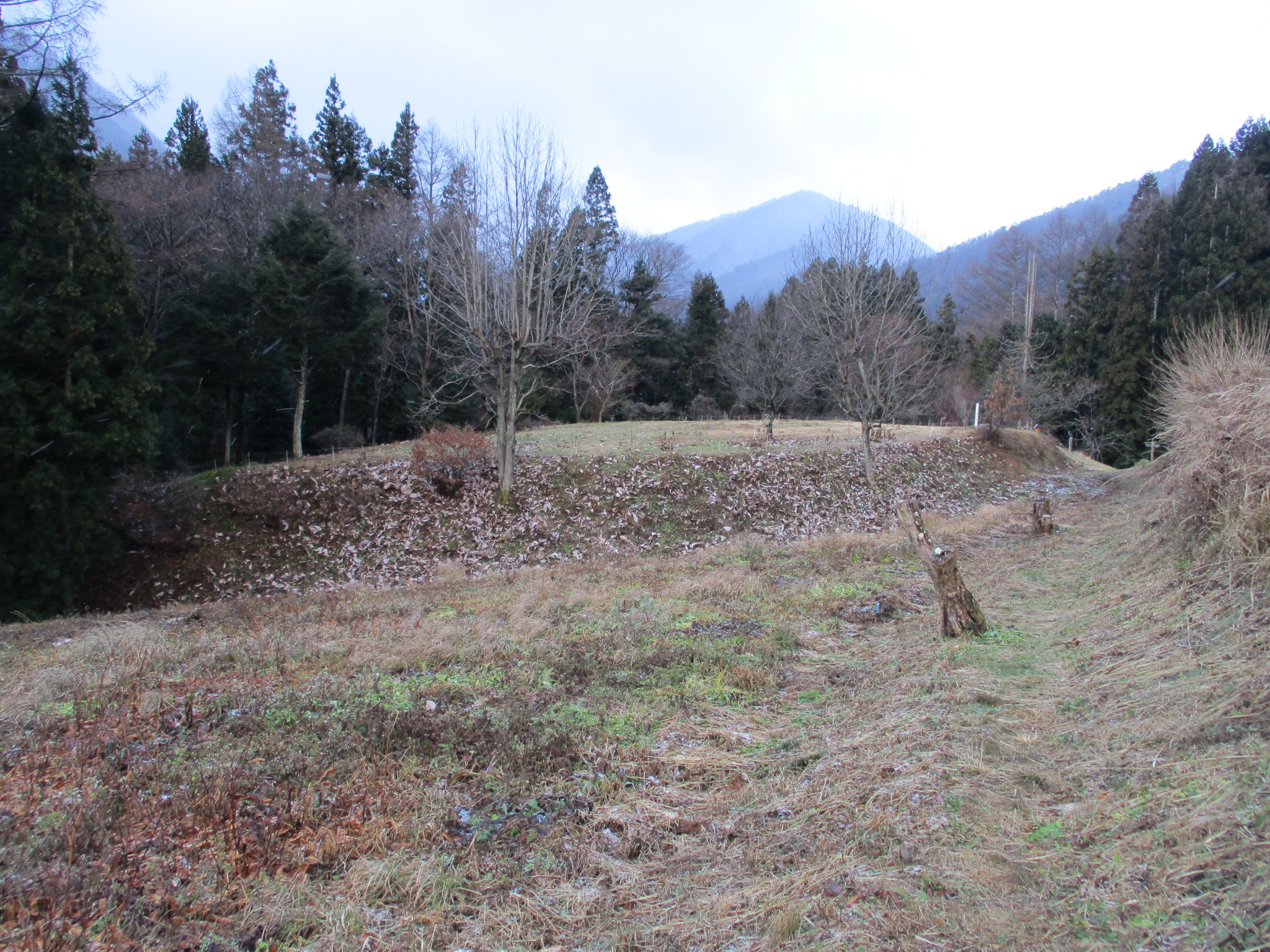 Naraijō served as the fortified residence of the Narai Clan. The main enclosure is 70m², and a 10m deep dry moat surrounds it to the north and west, with the cliffside to the east and a ravine to the south. Naraijō is itself a kyokan (daily living area) but does not have a corresponding yamajiro (mountaintop castle), but its inhabitants would've instead retreated via the Torii Pass and encamped there in the case of trouble.

Narai Yoshitaka served as lord of Naraijō. Yoshitaka had other names besides, but the fact that he adopted the name Yoshitaka is an indication of his allegiance to the Kiso Clan, since the "Yoshi" would've been taken from the famous general Kiso Yoshinaka. He is speculated to have been the son of Kiso Yoshiari, and the brother of Kiso Yoshiyasu (but an alternative history is that he was related to the Mimura Clan, a branch of the Kiso Clan, and sent to live with Kiso Yoshiari as a hostage where he would take the name Kiso Gengorō -- like the beetle). Perhaps this gives the reader a sense of how and why samurai warriors so called themselves. Politically Narai Yoshitaka was a vassal of Kiso Yoshiyasu.

If the legends are true then Naraijō would've played a role in the so-called First Battle of Torii Pass in 1549, which took place nearby. The Nakasendō, an important trade route, ran through Torii Pass and above Naraijō. Naraijō was on the far side of the pass from the Kiso's main base of Kiso-Fukushimajō, so it likely encountered enemy Takeda forces as they approached the pass. It is unknown what happened to the castle at this time but it is unlikley that, given the fort's small size, Yoshitaka would've fought here. He is credited with hampering the Takeda army's advance toward the pass. Perhaps Naraijō was burnt down or briefly occupied? Regardless, tales relate that Takeda Shingen's commander Amari Saemon was defeated at Torii Pass by Kiso Yoshiyasu and made to retreat. The year before the Battle of the Shiojiri Pass had taken place and some consider that the two events have been conflated. Even so, many battles took place at the Torii Pass, an important point in the Nakasendō between Shinano (via Kiso) and Mino; the most dramatic led to the collapse of the Takeda Clan at the hands of Oda Nobunaga in 1582. I hope to write further on this after I can actually visit the fort sites near the pass.

As for Naraijō, though Narai Yoshitaka fought for the Kiso side at Shiojiri and possibly also at Torii-tōge in the late 1540s, in 1555 he sided with Takeda Shingen against Kiso Yoshiyasu who was forced to surrender to and allign himself with the Takeda Clan. Perhaps Yohitaka was worried about the position of Naraijō on the far side of the pass, and this prompted his early surrender? Naraijō's role in the 1555 Battle of Torii Pass is not known. Kiso Yoshimasa, the eldest son of Kiso Yoshiyasu, would side against Takeda Katsuyori at the 1582 Battle of Torii Pass, luring the Takeda forces into deep snow and then surrounding them with cavalry. Oda Nobunaga made Kiso Yoshimasa lord of Fukashijō for his actions, and the Kiso briefly ruled over all of Chikuma and Aźumi (Kiso is the western half of historical Chikuma).

By 1582 the Narai Clan, still under Narai Yoshitaka, was once again alligned with the wider Kiso Clan, but in 1584 Yoshitaka conspired with the Niekawa and Chimura clans (Niekawa is directly north down the valley from Narai) to side with Tokugawa Ieyasu (and not Toyotomi Hideyoshi) during the Komaki-Nagakute Campaigns, and Kiso Yoshimasa killed him. Naraijō was possibly destroyed and abandoned at this time but its ultimate fate is unknown. It was likely ruins by the Edo period.

Naraijō is sited on a terrace above the historic inn town of Narai-juku. The earthworks of this small site remain, and dorui (earthen ramparts), dobashi (earthen bridge) and a prominent karabori (dry moat) system are in evidence. Although often called Naraijō (奈良井城), the sign post at the site reads Narai-shi Kyokan (奈良井氏居館), and the latter title is more explicit: this was the fortified manor hall of the Narai Clan (and not a full-on castle).

I visited Naraijō when the peak mountain-castling season had already ended, for winter had come early it seemed. I was planning to take the famous trail between Narai and Yabuhara which is the old Nakasendō (Interior Trunk Route), visiting the Torii Pass and several fort ruins situated nearby, but I found that the mountains here were already covered in snow. It was even snowing as I was inspecting the ruins of the castle. This surprised me since the weather in the Matsumoto Basin had been ideal! I retreated from Kiso rather than put up with the cold and the wet, but Naraijō was worth coming out for, and it was nice to see the old town again. Many travellers come to Narai-juku but few know about the remains of the castle.

Retrieved from "http://jcastle.info/smw2021/index.php?title=Narai_Castle&oldid=49340"
Category:
This page was last edited on 30 December 2021, at 23:37.
Content is available under Creative Commons Attribution-NonCommercial-ShareAlike unless otherwise noted.
About Jcastle.info
Contact Jcastle.info