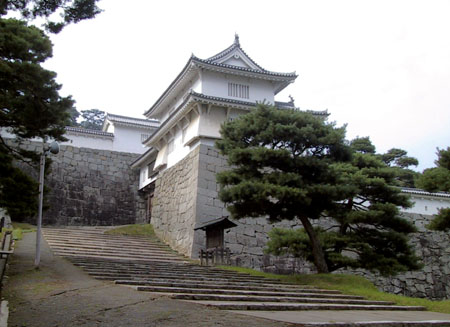 Hatakeyama Yoshitsugu captured Date Terumune, Date Masamune 's father, in 1585 and tried to take him back to Nihonmatsu. Upon hearing this, Masamune, who was out hunting, took off on his horse and caught up with Hatakeyama Yoshitsugu near the Abukuma River. He and his men shot the whole party dead and Terumune was killed in the struggle.

Hearing of the weakness of Nihonmatsu, a group of samurai from Hitachi (Ibaraki prefecture), including men from the Satake, Ashina, Iwaki and Ishikawa clans, set out to take Nihonmatsu for themselves. They clashed with the Date forces near present day Motomiya (between Koriyama and Nihonmatsu). This was known as the battle of Hitotoribashi. The battle ended in a standstill and Kasumiga-jo stood independent from both forces.

In April of the following year (1586) Date Masamune's forces once again laid seige to Kasumiga-jo. In July the son of Hatakeyama Yoshitsugu set fire to the castle and fled to Aizu. Thus the original castle at Nihonmatsu met its interesting demise.

The second castle was then built at the base of the hill and controlled by various families loyal to the Date, with the Niwa clan controlling it from 1643 until the Meiji Restoration.

The honmaru and it's stone walls site on top of the mountain a short hike from the reconstructed Minowa Gate you see in the picture above. It is definitely worth the trip up to see not only this but the awesome view of the surrounding area. The Chrysanthemum Festival which begins in October and runs into November was also quite impressive.

Kasumigajō is a vast mountain top castle (yamashiro) with incredible stone walls. The honmaru (main bailey) is cased in tall, sun-catching ishigaki (stone walls) with steep angles and graceful curves, in its proportions looming over the mountain like a tremendous ziggurat. The Tenshukakudai (donjon base), Nishiyaguradai (west sentry platform) and Hagashiyaguradai (east sentry platform) are accessed via the wide stone steps which lead up into the elevated honmaru. I wasn’t able to do a complete lap around the outside of the honmaru, per my custom, because the west side was defended fiercely by huge bees, but they did not fly as high as the honmaru itself.

Beneath the honmaru one can see older, more gently sloping ishigaki built in the Anōzumi style. These older blocks either are roughly worked or put in place simply as they were quarried, and are darker. The contrast between the lower and upper ishigaki demarcates the historical phases in the construction of the castle. The Ōtemon-ato is another steep stone foundation, formerly part of a gatehouse, which appears out of the wooded mountside as seemingly long unseen and forgotten. The castle’s most impressive feature is the reconstructed Minowamon (gatehouse) at the base of the mountain before the lower and upper sannomaru (third baileys). There is also a 17th century villa structure on site.

Just wished I had more time , so much has been added and much more being repaired. The Honmaru walls are complete and very impressive with spectacular 360 views.

After Shirakawajô i went to this one. What can I say more than the other comments? The hike to the site from the station is pleasant. The site itself is vast. There are a lot of trails, roads, paths and stairs all over the place. Like already stated below, a lot of explanation boards, with english translations, really thumbs up, are present. I think i didn't saw them all, because of the maze of trails. The view from the tenshukakudai, which is completely repaired, is astonishing. I met my first japanese snake on the site. I first thought it was a big twig, about 80cm long, on the stair, but when I got my foot over it, it spurred into the grass. I asked a passerby if these are dangerous, but apparently they aren't. 'No poison' he told me.

The construction work that is under progress is actually fixing damage from the quake in 2011.

Visited this castle in combination with Shirakawa. The grounds of the two castle ruins associated with Nihonmatsu are well worth the visit. Kris has a good write up of the features of this castle and I agree walking through the grounds as the sun is setting has a magical feel.

Above link also seems to be broken. Try http://www.n...migazyo.html

I walked to the castle from the station – the rekishikan, site of the Otemon, and an old-fashioned sweet store are on the way. The stone steps were a brilliant white and the water near the wisteria arbor was frozen except where the 7 step waterfall splashed into the frozen lake. Along with the white-topped umbrella pine there were many different types of pine trees at Nihonmatsu, making for a nice contrast of green and white. Also, there was something hauntingly magnificent in the sun sinking down over the western mountains and filling the snow-covered keep with light and shadows.

Next to the carpark is the 'Stone of Exhortation' – another great name! In 1749, Takahiro Niwa engraved his exhortation to retainers on a block of granite to remind them to be humble. The idea was copied from China but I think it is a good idea – we should have more exhortation stones around.

a lot of museums in Japan tend to be closed on Mondays unless it's a National Holiday. For Nihonmatsu Castle I think it is just a park so you can get in anytime, but for Komine Castle you should definitely go when it is open so you can go inside the nicely reconstructed keep. You can try to call or email them from their website http://www.s...ro/index.htm

Retrieved from "http://jcastle.info/smw2021/index.php?title=Nihonmatsu_Castle&oldid=18493"
Category:
This page was last edited on 7 October 2017, at 07:29.
Content is available under Creative Commons Attribution-NonCommercial-ShareAlike unless otherwise noted.
About Jcastle.info
Contact Jcastle.info