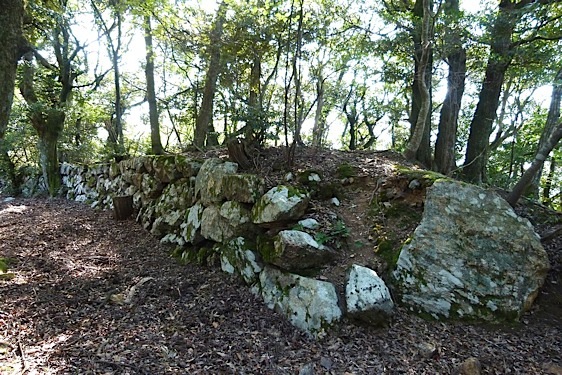 A branch of the Takeda Clan from Kai (present day Yamanashi Prefecture) moved to Wakasa (western Fukui Prefecture) sometime in the middle of the Muromachi Period (1338-1573). The earlier Takeda lords based themselves in Kyoto and were lords in absentia. However, Takeda Motomitsu, a fifth generation Wakasa Takeda lord, decided to live in Wakasa. In 1522, he built Nochiseyama Castle on a 168m mountain overlooking Obama Bay. The castle stretches 500 metres from north to south, and there are 139 baileys spread out over this mountaintop fortress. It is the biggest mountaintop castle in Wakasa. The Wakasa Takeda lords ruled Nochiseyama Castle until the eighth generation lord, Takeda Motoaki. After the defeat of the Wakasa Takeda Clan by the Echizen Asakura Clan in 1568, the castle was abandoned.

In 1574, one of Oda Nobunaga’s generals, Niwa Nagahide, became the new lord of Nochiseyama Castle. The stone stairs and wall remnants found mainly around the honmaru (main bailey) were not built by the Takeda Clan, but instead they were the results of successive improvements made to the castle by the following castle lords, Asano Nagamasa (1587-1593) and Kinoshita Katsutoshi (1593-1600). After the Battle of Sekigahara in 1600, Kyogoku Takatsugu became the lord of Nochiseyama Castle. Within a year, he decided to relocate and construct a new castle, Obama Castle at the river delta of Kitagawa (North River) and Minamigawa (South River). Subsequently, Nochiseyama Castle was decommissioned in 1615 according to the sign found at the trailhead. However, another Japanese source states that it was only decommissioned at a much later date in the 1640s after the completion of both Obama Castle and the new castle town. In 1997, it was designated a national historic site.

The trailhead is around a ten minute walk from Obama Station. It is near the tunnel on Route 27 and just behind a small Panasonic Service shop located opposite a petrol station. There is a free colour pamphlet about Nochiseyama Castle provided by Obama City available at the trailhead. During the Edo Period, the Atago Shrine was built at the site of the main bailey.

This castle ruin is also easy walking distance from JR Obama Station, you can easily get in Obama Castle and Nochiseyama Castle in one day. It is on the opposite side to Obama Castle and takes only around 8 minutes to get to the trailhead from Obama Station. The initial part of the trail up to the castle ruin is fairly steep, but the local authorities have put in steps on the trail, so it is fairly easy to get up and down the trail. At the start of the trail, there is a massive vertical ditch (Tatebori in Japanese) which can be seen. About 15 minutes or so up the steep trail, it levels out, and there is a sign in Japanese indicating a series of terraced baileys. No original structures have survived at this castle ruin, but you can see some stone walls up at the main bailey, stone stairs, earthworks, moats, and an earthen bridge linking two baileys. Around the main bailey, the ishigaki (stone walls) are around 1.5 metres high. Also, on the main path just below the main bailey, there are some stone wall remnants on the terraced baileys and stone stairs. This is one castle ruin off most castle fans’ radar, so my wife and I practically had the whole place to ourselves. We only bumped into one other castle fan while we were there. It is a national historic site, and for those who enjoy a bushwalk around a castle ruin, this is a nice one, worthy of at least a one-star rating.

Retrieved from "http://jcastle.info/smw2021/index.php?title=Nochiseyama_Castle&oldid=18501"
Category:
This page was last edited on 7 October 2017, at 07:35.
Content is available under Creative Commons Attribution-NonCommercial-ShareAlike unless otherwise noted.
About Jcastle.info
Contact Jcastle.info