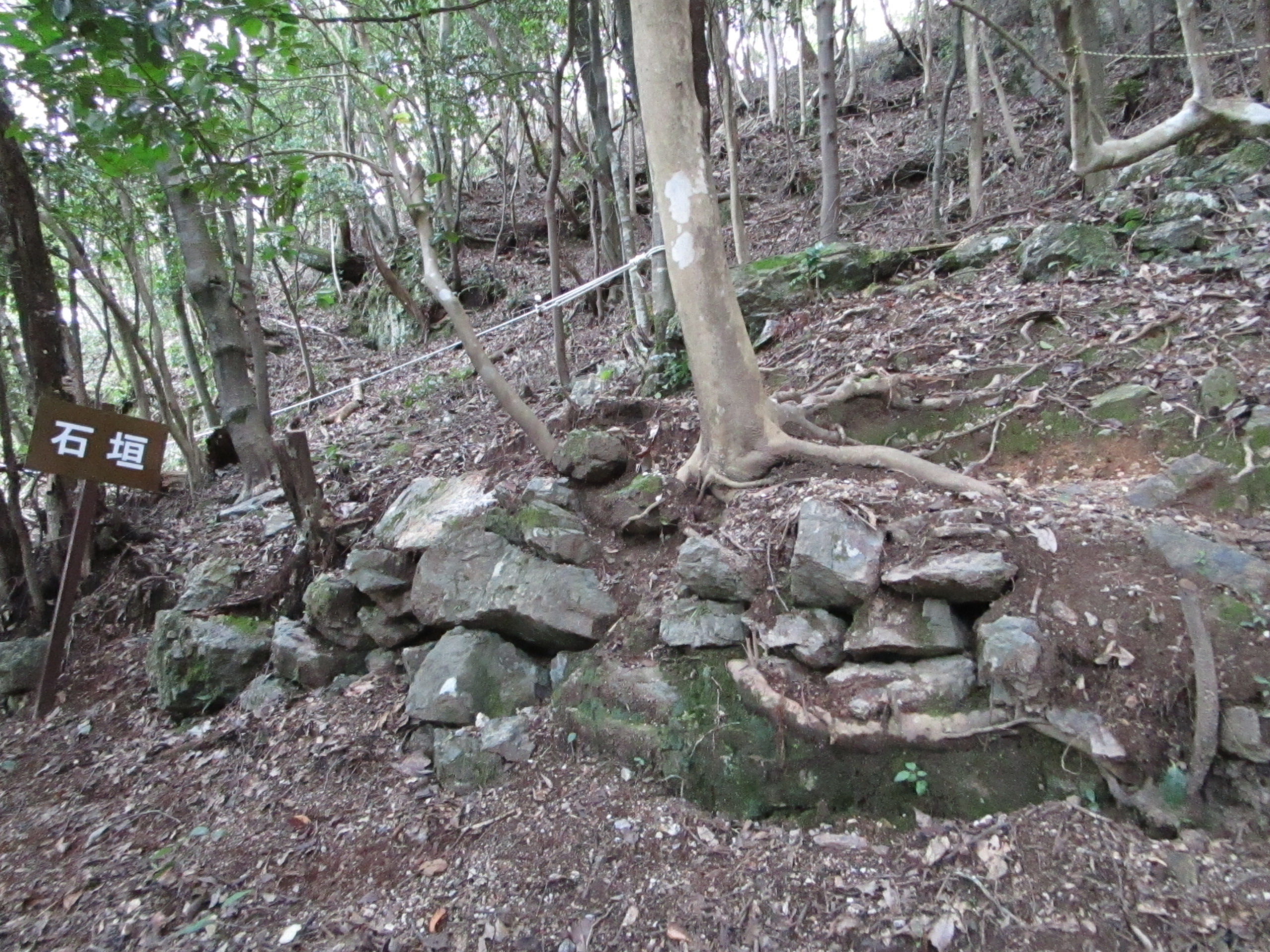 Ôga Castle was built by the Toki Clan, hereditary shugo (governors) of Mino Province. In 1535 flooding destroyed the Toki's main base at Edahiro-yakata, and so Toki Yorinari moved their headquarters to Ôgajō. As the new capital of the province Ôgajō was well-protected with fortifications in the plains as well as the mountainside, and a castle town developed around the foot of the mountain. Large dorui (earthen ramparts) and hori (moats) were built at three locations below the mountain, these being the Shikokubori (four province moat), the Echizenbori (Echizen Province moat) and the Sotobori (outer moat). In 1547 Ôgajō was besieged and destroyed by Saitō Dōsan.

The castle features ishigaki, kuruwa (baileys), koshikuruwa (sub-baileys), terraced baileys like a staircase, though now quite deformed, and I'm sure I identified a dobashi (earthen bridge) at the topmost bailey. There is a curious novelty awaiting brave adventurers at the top of the castle too. It is a mini mock castle tower! The diminutive proportions of the model I found to be very quaint, and this was easily worth the hike up. The views are also spectacular and it's possible to spy Gifujō atop of Mt. Kinka in the distance.

I brought my bear bell and found bear scratchings but because there were a fair amount of people around this proved unnecessary. The out-of-the-way yamajiro's surge in popularity owes to the recent taiga drama about Akechi Mitsuhide. Those poor bears have been put-out by the TV show! I can imagine them sitting around and discussing the sudden human activity on their mountain and being like, "Yup, it's that taiga drama, I told you". The base of the mountain has a new toilet for guests, so fresh I could still smell the wood, and extra parking spaces, as well as signs and materials, so they've really played up to their local tourist boom! Nice to see such appreciation for this nifty little site.

The plains surrounding the mountain citadel were divided by at least three large moat and embankment systems. Before it got dark I was able to find one, the Shikokubori (four province moat). Although the signposting is good, it's all in Japanese. Only one sign at the start of the trail I saw had any English, and it was a very general summary. Not a big concern for me but I suppose they aren't expecting many foreign visitors. Speaking of signs, the ruins are dotted with quizes about the castle's history put there by schoolchildren. It all makes for a lovely hike.

Retrieved from "http://jcastle.info/smw2021/index.php?title=Ohga_Castle&oldid=41948"
Category:
This page was last edited on 24 September 2020, at 08:18.
Content is available under Creative Commons Attribution-NonCommercial-ShareAlike unless otherwise noted.
About Jcastle.info
Contact Jcastle.info