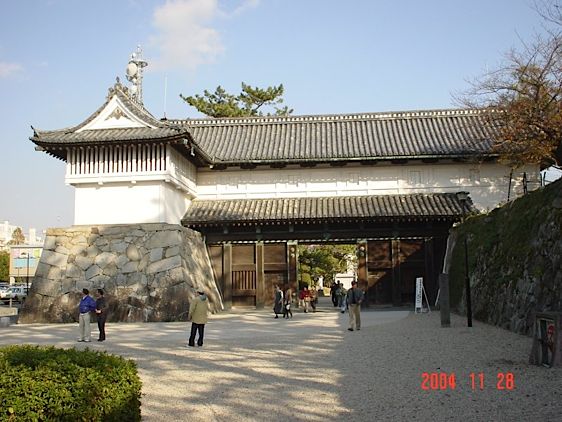 In 1608 Nabeshima Naoshige and his son Katsushige built Saga Castle from by expanding on and utilizing much of the former Muranaka Castle which belonged to the Sengoku period lords of the Ryuzoji clan. Saga Castle was plagued by fires. Between 1716-1736 most of the castle buildings including the main keep burned down. The main keep was never rebuilt but the palace and government buildings were rebuilt centering on the Ninomaru compound. In 1835 the Ninomaru Palace among other buildings burned down so they moved back to the Honmaru compound where a new palace was constructed. The extant Shachinomon gate and connected yagura date from this time period (1838) and the reconstructed palace also reflects the Honmaru palace from this period.

Much of the castle also burned down during the Saga Rebellion of 1874. The Honmaru Palace actually survived through the Meiji Period and was used as government offices and a school until it was dismantled in 1957.

Saga Castle is one of Kyūshū's premier castle sites. Sagajō's best feature, in my opinion, is the gigantic moat which surrounds it. About seven eighths of the main moat is retained, having not been filled in. Within this wide moat many waterways broke up the castle into multiple compounds; several of these smaller waterways are still visible today. The castle site proper is only a fraction of the land within this huge square moat, the rest having become part of Saga City.

The main area of the castle is surrounded mostly by ishigaki (stone-piled ramparts) and large dorui (earthen ramparts), including the tenshudai (platform for donjon) and yaguradai (turret platforms), one of which has been restored in modern times. The southwest corner turret platform's stonework of roughly hexagonal dark and light blocks creates a nice patchwork effect out of the kikkōźumi kirikomihagi ishigaki (ramparts piled from precisely cut, tortoise shell shaped stone blocks).

Of extant structures Sagajō has the Shachinomon, a gatehouse with adjoining turret, (re-)built in 1836. Of reconstructions it has the honmaru goten (palatial residence of the castellan in the main bailey), reconstructed in 2004. The reconstruction is mostly historically accurate and incorporates some of the building materials of the original palace (these are full of nail marks and such, having been much abused during their time as part of a modern public building). In the reconstructed palace concrete foundations are used instead of stone. Some of the original stone foundations are kept in place beneath the structure. Additionally, the Gozama part of the palace is supposed to be original (it has been extensively restored), having been relocated away from the castle for many decades and then returned when the rest was reconstructed.

From the Muromachi Period to the Sengoku Period the Ryūzōji-shi (clan) controlled the area on which Sagajō is built today from their base of Muranakajō. Under Ryūzōji Takanobu, the Ryūzōji-shi were defeated bythe Arima-shi and Shimazu-shi in 1584. Nabeshima Naoshige, who had been a retainer of Ryūzōji Takanobu, took control of Muranakajō. Nabeshima Naoshige allied with Toyotomi Hideyoshi and participated in the Imjin Wars. After Toyotomi's death the Nabeshima supported Tokugawa Ieyasu and in the Edo Period Nabeshima Katsushige became the ruler of Saga Domain.

Nabeshima Katsushige built Sagajō from 1602 to 1611. When completed Sagajō had a five-tier tenshu (main keep). Sagajō's huge moats were not constructed with stone-piled ramparts beside them but earthen embankments instead. The dorui was turned into a tree line for further cover. Some of these trees still grow and have become huge.

Sagajō was ravaged by fire in 1726 and in 1835 (that's 115 years and 109 years between each major fire). In the first of these the tenshu was lost and not rebuilt. The extant Shachinomon was rebuilt in 1836 following the fire the year before. It seems that the ninomaru (second bailey) became the main administrative area of the castle in the era between the two fires but after 1835 this was moved back to the honmaru. Sagajō was largely destroyed during the Saga Rebellion of 1874 against the new Meiji regime.

The Honmaru Goten, Palatial Residence of the Lord of the Castle in the Main Bailey, was built in 1838. After the abolition of the Han System the surviving portions of Sagajō's Honmaru Goten were retained and used to host public facilities such as schools and a courthouse. This survival was somewhat miraculous because most of the castle was destroyed in the Saga Rebellion of 1874, including everything in the second and third baileys.

However, by degrees, the survivng Goten was almost entirely lost. The structures were not appreciated so much for their historical value as for utility. In 1909 Akamatsu Elementary School was relocated to the site (there is still a small marker to commemorate its presence there now). Throughout this time palatial structures were gradually demolished and replaced with modern school buildings. In 1920 the Genkan (entrance parlour) area of the palace was demolished. The palatial structures were gradually destroyed until only the Gozama was left. The Gozama had been the room used by the last lord of Sagajō, Nabeshima Naomasa, as his quarters, and so it was originally quite lavish. Structural alterations were made to the Gozama between the period 1909 to 1939. Major repairs were carried out in 1921.

In 1958, a year after the Shachinomon was declared an important cultural property, the Gozama was relocated from the honmaru to a nearby park where it served as a museum building. A scale model of the Gozama was made at the school before it was transported away. This and photographs were used to confirm that the Gozama went largely unchanged from that time. In 2004 the Gozama was finally returned to the castle as part of the reconstructed palace. Reconstructed rooms at the palace include (I have dispened with the honourific prefixes): Genkan, Shikidai, Soto-shoin, Ryōrinoma, Nando,Shikumidokoro, Tamarinoma, Koshoin.

It may have been previously stated that the Goten was demolished in 1958, but this is a (common?) misunderstanding based on the Gozama's relocation at that time. In truth most of the Goten had already been destroyed by that time. Castles with extant goten famously include Kakegawajō, Nijōjō, Kawagoejō, and Kōchijō. Sagajō was formerly in the club of other castles with relocated palatial structures, such as Edojō and Fukuijō, but now it has at least some original palatial... parts. Having a reconstructed palace means that it joins the likes of Sasayamajō and Nagoyajō. In addition to castles, several jin'ya also have survivng administrative structures, such as at Takayama-jin'ya and Idoki-jin'ya.

I enjoyed this site and thought highly of the restorations. It's just a shame so much had to be restored in the first place. Even though I wouldn't mind paying, entry into the honmaru goten is free. I even got a free tour in (passable) English.

I don't think I can add much to what others have said here. This is a very interesting castle site that did a splendid job at reconstructing a large part of the palace, including an original part of it in the process. Everything, including the good audio guide, is for free. They seem to have many activities for small children.

I really like how the castle still looks traditional.

Visited 25 March 2015 (https://with...-march-2015/). Excellent job on the reconstructed palace, and the English audio guide (free) is both detailed and well produced. Friendly and accommodating staff - special shout-out to the fine gentleman in the Goza-no-ma who accompanied me as I toured the palace and patiently answered my questions (all the while tolerating my atrocious Japanese). Admission is free, but donations are appreciated; give generously if you can as it certainly seems well deserved.

I give it 3 stars because of the wonderful information you get with the free audioguide and the panels around the palace. I was struck that the reconstruction is actually 80cm above the real site. In one section of the palace you can see the old base-stones. To protect these they have put some earth on them and then they have put new base-stones right above the old ones to build the new buildings. In the doors of the Shachinomon you can see some bulletholes from the fightings during the Boshin-war. This is really a nice site to visit. I recommend it.

Audio guide at museum was very good and friendly staff, made this one of the most informative museum experiences

As Kyushu Dan has mentioned below, there aren’t as many stone walls to see here as at other castle sites, but it has enough including the tenshudai (stone foundation of the castle keep). However, the real attraction at this site is the carefully reconstructed palace using four different kinds of wood. The columns are Japanese Cyprus (Hinoki) and the horizontal roof beams are pine (Matsu). Cedar and zelkova were used, too. The museum located in the reconstructed palace is very well organized with free audio-guides in English and many major signs included an English section. Actually, the whole place is free, but they do have a donation box out. I put in 1,000yen as most castle sites would charge at least 300 to 400 yen plus maybe another 500 yen for the audio guide. They have done a wonderful job of rebuilding a significant portion of the palace from the Edo Period. No worries about supporting castle sites that actually preserve and rebuild structures using traditional materials. There is one section of the palace that is original. The Gozanoma was built in 1838. It was moved somewhere else and then moved back to be part of the restored palace, so the wood there is obviously darker and older-looking. The palace is not as flashy as Kumamoto Castle’s Honmaru Palace, but it is much bigger than the reconstructed one at Sasayama Castle and the original one at Kakegawa Castle. This is a great site to visit, and the staff is very helpful and friendly. A couple of them can speak English as well. A huge thumbs up for this site, and I reckon most castle fans would enjoy Saga Castle. Three stars for the site and a very good experience with the museum, the organization with plenty of English support, and the helpful and friendly staff.

It struck me after having spent the morning at Fukuoka castle, where stone foundations/walls are everywhere, how little stonework there is here. Stone isn't everything though, the moats are some of the widest I've seen and for me the gate tops it off nicely.

Retrieved from "http://jcastle.info/smw2021/index.php?title=Saga_Castle&oldid=18546"
Category:
This page was last edited on 7 October 2017, at 20:57.
Content is available under Creative Commons Attribution-NonCommercial-ShareAlike unless otherwise noted.
About Jcastle.info
Contact Jcastle.info