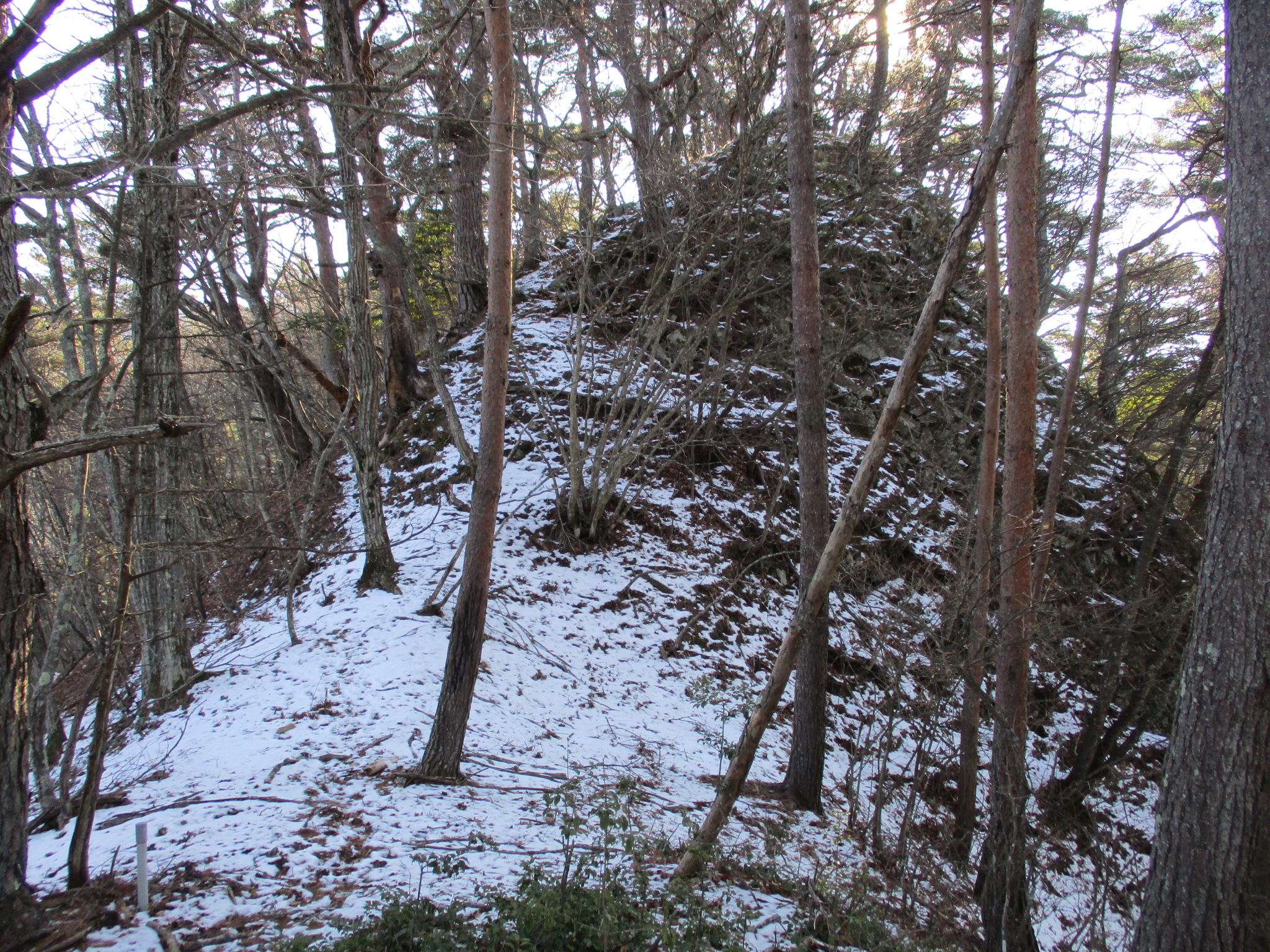 Descending and rising as the dragon in flight, hoary pinacles of rock rise from the ridge like great spikes on the back of the beast. The brave adventurer - that's me - bestrode that soaring dragon, and returned with the treasure of another conquered mountaintop castle!

That's my version of events and I'm sticking with it. But actually the ruins of Sarukoya-toride were not easy to find or climb to. I probably could've climbed up straight from Kakiagejō, but I had the wrong co-ordinates, and so descended and re-ascended via another ridge. I searched high and low but found no ruins, and it was then I determined that I had got the wrong ridge and my marker was inaccurate. To reach the next ridge I could've descended or gone right to the top of the mountain which loomed above. I chose the latter option and it was well I did. My suspicion at that point was that the castle ruins may terminate at the peak, climbing from the ridge opposite Kakiagejō, but when I got to the peak I saw it was just the beginning of the long, undulating ruins of Sarukoya-toride. I knew that because I had a map so that I could identify which bailey I had arrived in. To reach the end of the castle I still had to traverse the ruins, but that was the fun part after so much slogging upward!

There are five groupings of narrow baileys straddling the ridge, and each is separated by either a trench, a drastic increase in elevation, or both. The fifth, lowest bailey has several sub-baileys beneath it, and a boomerang-shaped trench which is where I first recognised and entered the fort area. Impressive rock formations help protect the third bailey and much of the first bailey, and the latter bailey is the highest but smallest. Parts of the ramparts of the first bailey look also like they may have been augmented with stone piles, though mostly they are composed of the rock of the mountain itself. Between the fourth and third bailey is a trench which is quite wide as it slopes off down the mountain, and this seems to be augmented natural terrain. Between the third and second bailey, however, human hands have wrought a gigantic, fearsome trench*. At its centre is a sunken earthen bridge. I had not expected such impressive defences this high up; was nature not enough?

Sarukoya-toride, 'Monkey Hut Fort', lives up to its name. As I said, it's both difficult to locate and difficult to get to. Castles called for monkeys are usually very high up, and so 'monkey castles' because only monkeys can get to them ('demon castles' are likewise). Though 'koya' means 'hut', in reference to mountaintop castles it refers to a small, hidden redoubt. 'Koya' is a misnomer here because the site is quite extensive. The use of 'toride' for 'fort' instead of 'castle' is probably because, firstly, the baileys are quite narrow, and, secondly, Sarukoya-toride was a branch fort serving Kakiagejō (though overall it seems Sarukoya-toride covers a larger area).

Retrieved from "http://jcastle.info/smw2021/index.php?title=Sarukoya_Fort&oldid=53359"
Category:
This page was last edited on 8 June 2022, at 14:44.
Content is available under Creative Commons Attribution-NonCommercial-ShareAlike unless otherwise noted.
About Jcastle.info
Contact Jcastle.info