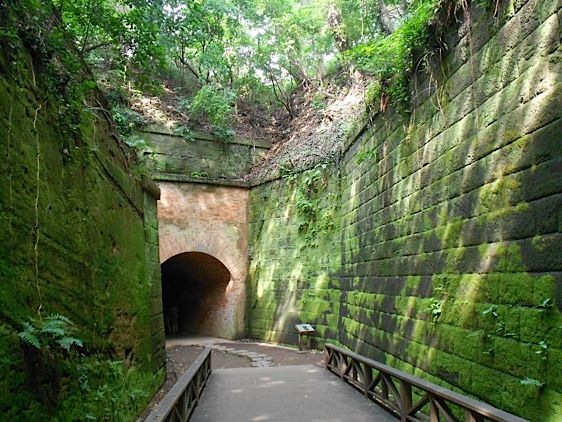 Sarushima is the only natural island in Tokyo Bay. Although it is called Monkey Island, there are no monkeys (or pirates) on it. The island was originally called Toshima, but in 1253, according to legend, Nichiren was shipwrecked on this island and prayed in a cave to be rescued, salvation coming in the form of a white monkey. The cave is at the far end of the island. The island was renamed Sarushima until 1853 when Matthew Perry surveyed the island and attempted to name it after himself. The name never really caught on.

The appearance of Black Ships led the Tokugawa Shogunate to consider creating a series of battery islands to protect against invasion. Sarushima was the first such daiba, or battery island, in Japan. The battery suffered damage during the Ansei earthquake of 1855, however, and the tunnels and brickwork the island is famous for date mostly from the Meiji era. In 1877, Sarushima came under the jurisdiction of the navy, and in 1881 it came under the ministry of the Army, who proceeded to construct the fortress as it mostly is today, completing it by 1884. The shrine on the island was relocated to prohibit public access. In 1923 the battery again suffered damage during the Great Kanto Earthquake. In 1925 it was handed from the army back to the navy, who rebuilt the fortress one more time. In 1941, anti-aircraft guns were installed on the island for use during the Second World War. In 1945 it became the property of the American forces, who removed the functional parts, thus ending Sarushima`s history as a fortress. It was returned to Japan fully by 1961 and is now a popular spot for barbecues.

The fortress on the island was constructed by digging down from the top to create a series of tunnels and powder magazines that would be invisible to passing boats from the outside. The cannons on the island could then be used to launch a secret attack on any unwanted vessel. The red brick work is one of four rare existing examples in Japan of Flemish-style red brickwork, the rest mostly being done in the English style.

Access is by ferry only. The island`s proximity to the American base and popularity as a BBQ spot seem to mean it is quite crowded on the beach. The nearby (Meiji era) Mikasa warship museum is considered one of the three best warship museums in the world and may also be of interest.

Added some pictures of the actual daiba site. Nothing remains.

Unfortunately there really is nothing to see of the Edo Period daiba, but the Meiji Period stuff is cool.

Retrieved from "http://jcastle.info/smw2021/index.php?title=Sarushima_Battery_Island&oldid=45866"
Category:
This page was last edited on 2 March 2021, at 15:23.
Content is available under Creative Commons Attribution-NonCommercial-ShareAlike unless otherwise noted.
About Jcastle.info
Contact Jcastle.info