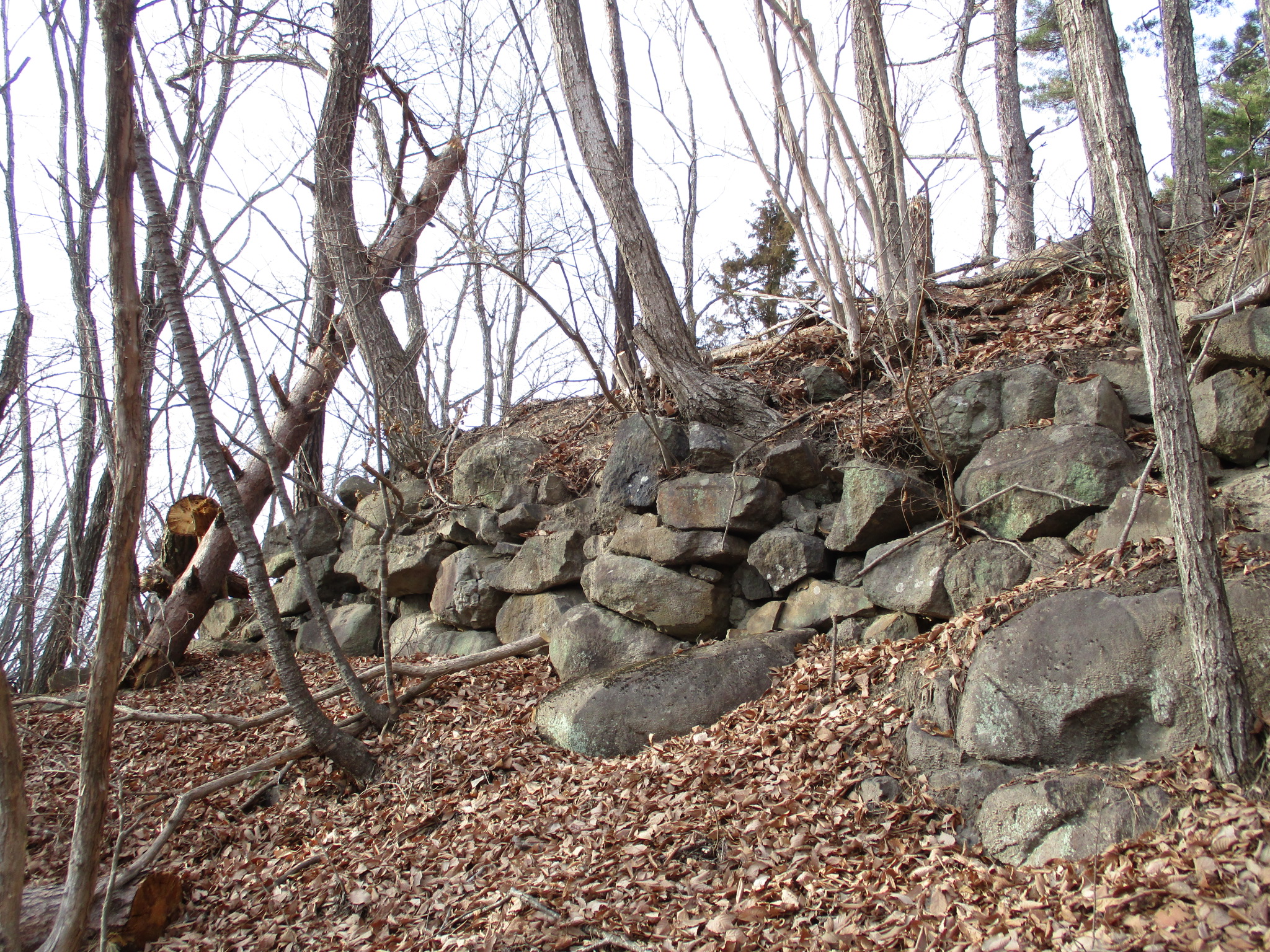 Shigajō was constructed in the Sengoku period by the Kasahara Clan. In 1546, Takeda Shingen attacked the castle during his invasion of Saku County. The castle was defended at this time by its owners, the Kasahara, under Kasahara Kiyoshige, as well as forces sent by Uesugi Norimasa, Supreme Governor of Kantō, and allied forces under Takada Noriyori from Kōzuke Province. Takeda Shingen had surrounded Shigajō by the time Uesugi forces arrived, and Takeda sent his commanders to cut-off the reinforcements, which they did successfully, defeating them at the battle of Usui Pass. With their reinforcements routed, the castle succumbed to the Takeda siege, and Kasahara Kiyoshige and Takda Noriyori were slain in the battle. The head of Kasahara is said to be interred beneath a stone stupa at the temple below the castle.

A popular account of the battle tells that Takeda forces arranged 3,000 severed heads around Shigajō to intimidate defenders. This story was first related by a monk who was not at the battle, however, and probably they did not have so many heads (plus the logistics of arranging them all would’ve been a pain in the neck!). Nevertheless it seems that some heads were displayed, albeit not thousands, and it’s possible that severed heads were even catapulted into the castle to terrify the defenders. The results of the battle were cataclysmic for the people of Saku. Shiga village was emptied and countless prisoners were taken as slaves. Whilst some were sold back to their families if they could pay a ransom, others were condemned to work in gold mines (working conditions being very terrible). Lady Kasahara was taken as booty and wed to Takeda vassal Oyamada Nobuari. There were also wanton massacres throughout the county. Takeda Shingen remains a reviled figure in Saku to this day.

Shigajō appears to have been abandoned after its destruction by Takeda forces and went unused by that faction, but there is evidence that it was re-built and expanded by the re-surgent Ogasawara Clan for a time after the fall of the Takeda Clan. This theory accounts for the western bulk of the castle with the piling methods and block size of its stone walls being quite different from in the castle's eastern portions.

Shigajō is a premier yamajiro (mountaintop castle) site in the Saku area of Nagano. Nature itself leant its immense might to the construction of this castle situated above cliffs of towering rock. Indeed, the terrain to the south is an invincible wall and the cliff face even overhangs in many places as though to repulse man, monkey and even demon. The terrain to the north is also rugged with boulders and cliffs in many parts. To the west there is a narrow mountain ridge, and the only readily accessible approach to the castle is the eastern side slopes of the mountain.

Features of Shigajō include dorui (earthen ramparts), horikiri (trenches), kuruwa (baileys) and ishigaki (stone-piled ramparts). The piling method and block size used in the ishigaki differs drastically in the west part of the castle from in the east, indicating a later expansion of the castle to the east where the castle might’ve been more vulnerable. Beneath the castle was the kyokan (living area), now the site of Unkyōji. The trail up is from here. The castle’s layout could be described as renkaku-shiki (one bailey positioned after the other in a line) with spurs. Due to the castle’s extensive terracing, flat bailey spaces, deep trenches, and ishigaki hiding throughout, Shigajō is a fun and rewarding yamajiro to explore.

Retrieved from "http://jcastle.info/smw2021/index.php?title=Shiga_Castle&oldid=50347"
Category:
This page was last edited on 17 January 2022, at 15:41.
Content is available under Creative Commons Attribution-NonCommercial-ShareAlike unless otherwise noted.
About Jcastle.info
Contact Jcastle.info