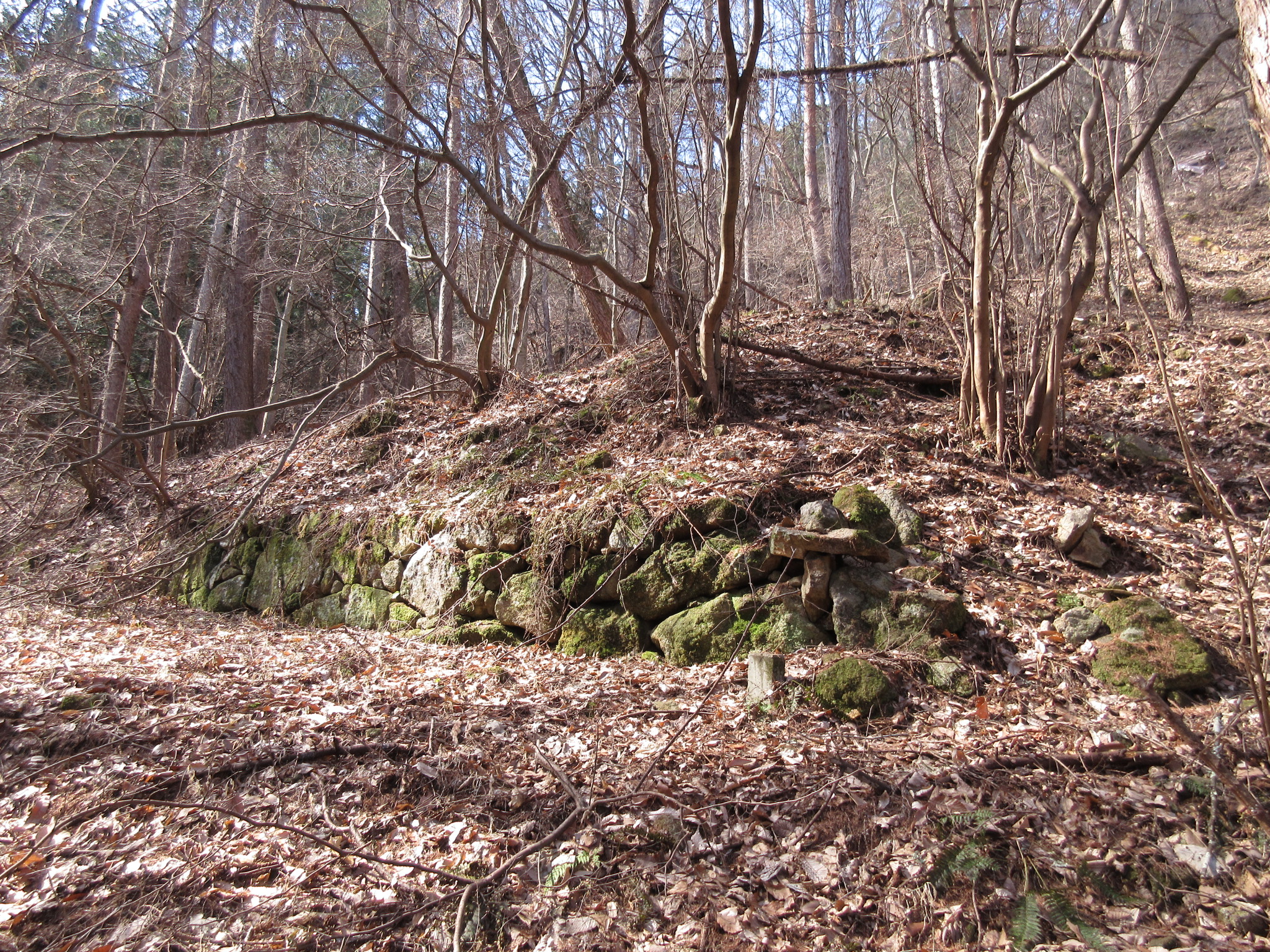 Shiodajō was first built by Hōjō Yoshimasa in 1277 as the seat of the Shioda branch of the Hōjō Clan. Subsequent castellans also included Hōjō Kunitoki and Hōjō Toshitoki. In 1333, the Shioda-Hōjō mobilised in order to defend Kamakura but were defeated there and wiped out.

After the destruction of the Shioda-Hōjō, the Murakami Clan took over Shiodajō. Various clans controlled the castle during the Sengoku Period: the Murakami, the Takeda, and the Sanada. Takeda Shingen first took the castle from the Murakami, but Murakami Yoshikiyo re-took it with the aid of Uesugi Kenshin and made the castle his residence. Shortly thereafter, however, Takeda Shingen returned with more forces and was able to conquer the castle. He placed Obu Toramasa in charge of Shiodajō, which became the Takeda's main base in 1553 during the Kawanakajima Campaigns and from then on.

After the downfall of the Takeda Clan, the Sanda Clan took over Shiodajō. When they built Uedajō in 1583, however, they abandoned the castle.

I spent basically the whole day exploring a single castle complex, the ruins of Shioda Castle. Shiodajō is the largest pre-proto-modern castle in Shinano (Nagano Prefecture), but even so I hadn't realised just how much time and energy climbing it would take to fully explore. I am confident, however, that, after a couple of missteps, I missed no part of the site - or at least no known part of it. I would have to guess that I am the first foreigner to explore the whole thing, but there's no way to know that. Whilst Shiodajō is fairly well known locally, the site as a whole is not well represented, and many visitors to the castle ruins, even to their uppermost peak, probably only explore half of it at the most.

Shioda is called locally 'the Kamakura of Shinshū' due to the concentration of splendid temples throughout the valley, a product of its historic prosperity. At its centre Shioda had a large castle. Or, rather, a castle complex with a series of fortifications built over several ridges of a mountain. These fortified ridges cradled the castle proper in the steep valley between them.

I had already been to Shiodajō before, but only what proved to be a small part of it. At that time I wrote that the castle has an upper and lower part. This is true in a sense, but the upper castle was actually series of forts and fortified peaks along the ridges. One could further distinguish an upper and lower part of the castle proper, as the most secure area, and today the site of its most impressive ruins in terms of remaining structures, is narrower and nestled snugly between two ridgetop forts, the West Fort and East Fort.

The forts of Shiodajō which together constituted a vast fortress are numerous, but the three main ones, from which smaller fortified areas radiate out from, are the Nishi-toride (West Fort), Higashi-toride (East Fort), and Kōbōyama-toride, the latter also called "Upper Shioda Castle" as it is the highest situated on the mountain peak. The well defined Nishi-toride is on a terminus of the west ridge, and above it are the lower reaches of the Upper Castle which are referred to as its central or middle forts. The Upper Castle further has western and eastern fort groups. The eastern fort group spans the eastern ridge and connects with the Higashi-toride which functions as the main node in that branch of the fortress. It should be noted that distinct from these forts and the rest of the Upper Castle, as well as the West Fort, is the 'grouping of westerly forts' which spread onto an entirely different ridge to ensconce another valley, now the site of the temple Ryūkōin, which neighbours the main castle / Lower Castle. Although the western fort group links up with the western branch of the Upper Castle, they are separated by a severe and abrupt change in elevation - well, a cliff, I suppose.

As for the castle proper, I will detail its features below. The Lower Castle of Shioda is a valley castle composed of a series of terraces. The site can be divided into three parts, the outer, middle and inner (these are my divisions). The outer castle ruins are indistinct as they are now the site of various rice paddies and orchards covering hillside terraces. The middle ruins begin where the tarmac road turns down hill, and there is a large stele here which proclaims the site. From here the ruins become more distinct, and include karabori (dry moats), dorui (earthen ramparts) and tatebori (climbing moats). The terracing here is bold and spacious, and the terraces are tall. Various residences would've stood here. An impressive segment of dorui runs opposite the old stele. Beneath the stele are the remains of a karabori.

The inner castle, which I define as the area being flanked by the ridgetop forts above, starts at the point where there is now an information board. There is also a fence here to keep out / in wildlife. In my previous visit this was as far as I ventured as that day was dedicated to visiting temples. The inner castle is much narrower, on average about half the width of the lower sections. Terraced baileys are located either side of the Ôte (main path). At the top of the Ôte, or at least before it bends, is something that looks like an old tomb or storage space, a structure of earth and masonry, though it is also shown on maps as a well. I haven't seen a well dug into a slope rather than straight down before. Behind the Mishima Shrine is a very large tatebori. To the left are four smaller tatebori, but I couldn't see these due to the overgrowth and I had no desire to crawl around on the hillside looking for them. I could see some bumps and rills, and that is all. I left that section to the experts. Actually, I then saw Ranmaru-sensei wrote on his blog "if you can see four tatebori here then you are a true believer in God (Miyasaka Takeo)". Ha. I put down "unejōtatebori" as a possible feature.

Above the shrine the inner castle becomes more claustrophobic - or cosy, depending on one's point of view - and is half the width again of the proceeding segments. The path climbs to the right and to the left are a staircase of terraced baileys. The start of this inner section of the inner castle is guarded by a tatebori to the east and a climbing section of sekirui (stonewall) to the right. The stone-piled wall has collapsed considerably but it's still obvious if one knows to look for it, and the stones were clearly piled around some sort of climbing embankment. This is a very interesting defensive feature but probably many visitors miss it.

It is from here that we find Shiodajō's most salient features, its ishigaki (stone-piled ramparts), koguchi (gate complex), and ido (well). The 'tiger's maw' gate with its ishigaki is amazing considering its age. Although bits of masonry can be found here and there about the Lower Castle, the blocks here were most sturdily applied. The shape of the gate complex, forcing angled turns, is easy to appreciate. To the rear of this gate area is a stone-lined well. When I interrogated its depth with my camera flash I saw that there was a puddle at the bottom and a hardhat. Luckily it appears that there was no head in the helmet when it fell down. Several terraces climb beyond this gate area, and from here paths lead to the various forts of the Upper Castle and beyond.

For other parts of this fortress see:

This site is massive. It took me six hours to see it all. I'm going to have to re-write this article.

Retrieved from "http://jcastle.info/smw2021/index.php?title=Shioda_Castle&oldid=58317"
Category:
This page was last edited on 3 October 2022, at 15:44.
Content is available under Creative Commons Attribution-NonCommercial-ShareAlike unless otherwise noted.
About Jcastle.info
Contact Jcastle.info