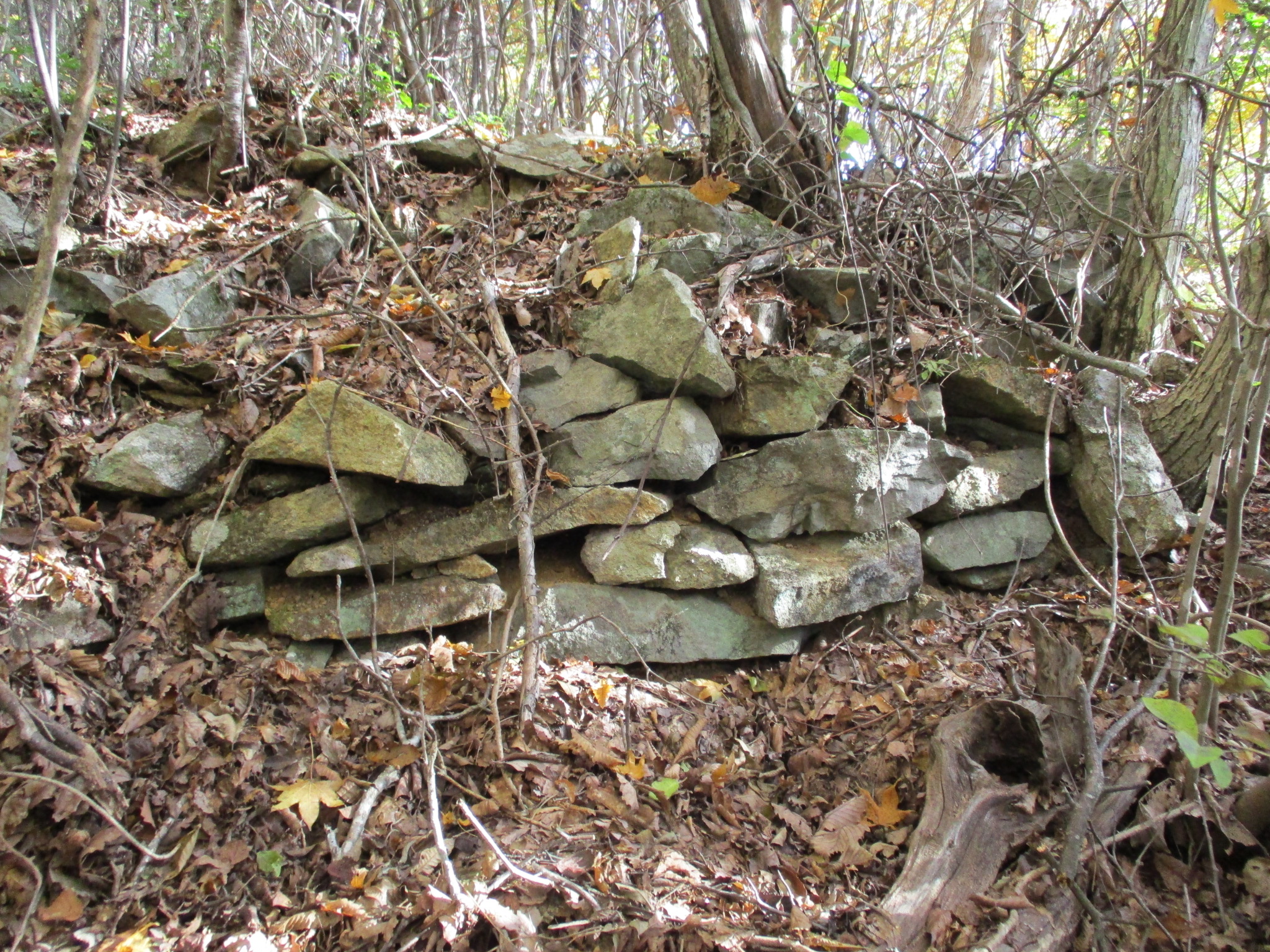 Rather than just a look-out or signal tower alone, it seems that Shōjō was also intended as an effective final redoubt for Aratojō and the other forts in between would’ve been used to buy time for the defenders.

Beneath the main bailey was a flattened area with what looked like a climbing moat to the side, but it seems somehow incongruous. I noticed and photographed this area, which may have been a fourth, forward bailey, but I was unsure of what to make of it. It turns out that this flattened area is thought to have been used as a garrison space, but that the climbing moat was likely the result of later excavation or defacement of an existing structure. Who would do that? Well, it may have been used as a sort of dry log flume for the collection of trees felled from the ridge.

I hadn’t counted on finding much at Shōjō and so was quite chuffed with my reward for climbing up so high. I had paused to think about proceeding, but I am glad I did. I also thought about continuining to climb to the 839m peak thereafter, for I hate to leave a job undone, and it seemed to tempt me with a further challenge. But I had no reason to suspect any castle ruins there, and prioritised visiting the yakata sites below. Apparently though there was some small fortification up there, either a fortified signal tower or some rear guard post, called Bōjō (坊城). I didn't know this, and its existence is attested so far only from a single source that I've found. If I had known I would've probably gone up, but I wouldn't've been able to visit the yakata sites then.

Shōjō is situated much higher than the other forts in the Aratojō fort complex, just short of the 839m peak. The forestry road which takes one from Aratojō to Wakamiya-Iriyamajō turns off, and the trail along the ridge doesn’t last for long before disappearing, and so anybody climbing to this furthest milestone must do so by climbing the steep ridgeline unaided. I put my gloves on and went for it, grabbing onto trees and rocks for support. Since Shōjō is said to have been used as a noroshidai, or signal tower, I wasn’t expecting to find much at this hard to reach site. However, I was to be pleasantly surprised.

I finally came beneath a portion of the ridge that suddenly widened and struck up at sharp angle, indicating the manufacture of medieval hands. Sure enough, this was dorui (earthen ramparts), and I was delighted to see that it wrapped around almost all of the shukuruwa (main bailey), diminishing where gates were likely located. In addition to this I was most happy to find remnants of stonewalls around the outside parts of the dorui. The piling method here seemed to make use of flat stones stacked laterally, suggesting some continuity with the restored stone walls of Aratojō below, which was reassuring. There are a couple of lower baileys situated between the shukuruwa and the 839m peak. The second bailey has some residual stonework, and the third has significant portions of stone pilings remaining, including one segment which appears to climb the slope for a couple of metres (this may be due to subsidence).

From a gap in the trees near the third bailey wall I observed a vista which opened up out of a blanket of white between the trees and a sunny sky dome. Rising above the sea of cloud was the Katsuraojō castle mount.. I could also make out the site of Himejō poking out from the clouds like craggy rocks half submerged in sea foam.

Retrieved from "http://jcastle.info/smw2021/index.php?title=Shou_Castle&oldid=49271"
Category:
This page was last edited on 30 December 2021, at 13:35.
Content is available under Creative Commons Attribution-NonCommercial-ShareAlike unless otherwise noted.
About Jcastle.info
Contact Jcastle.info