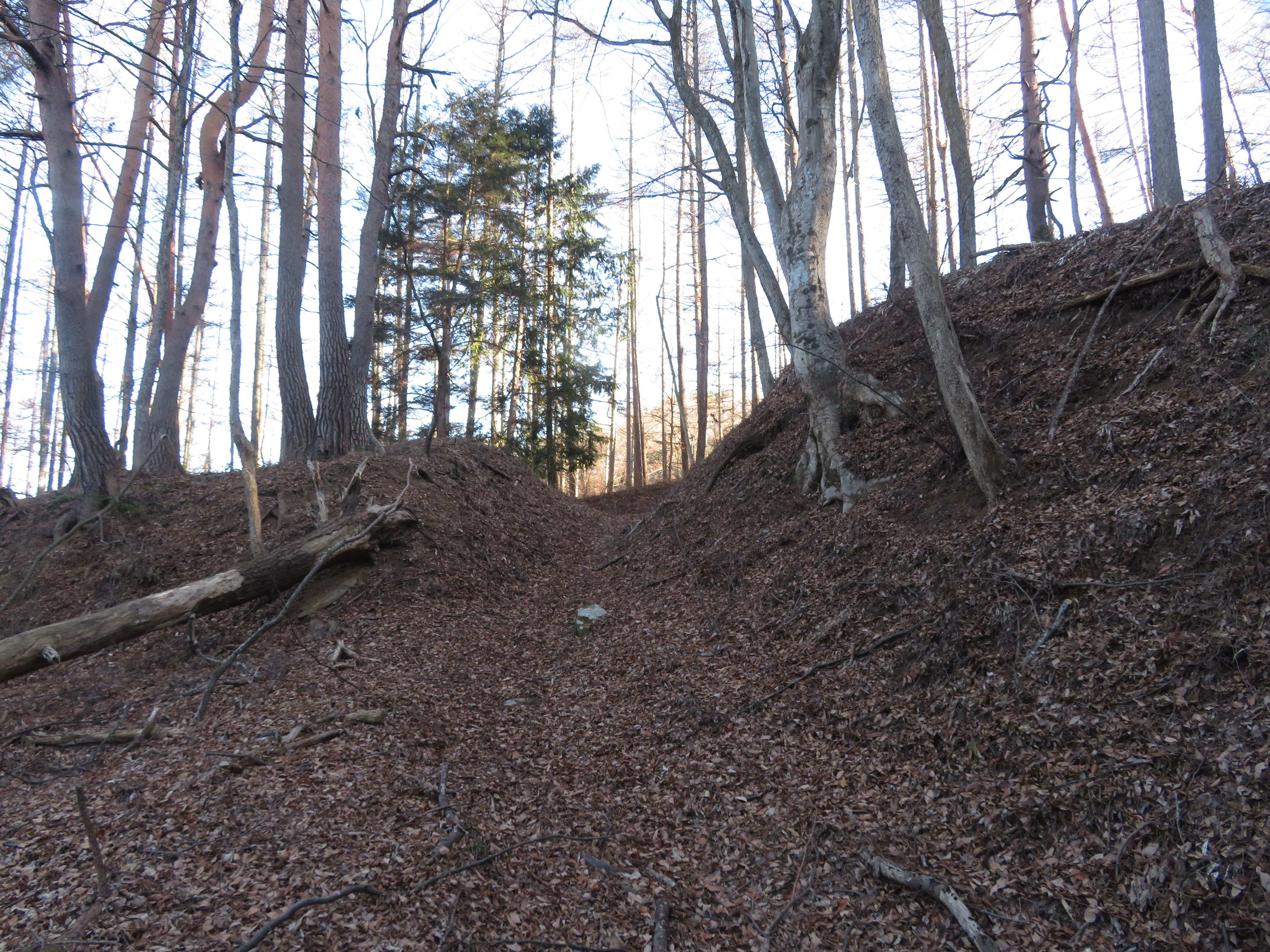 Takei Castle was built in 1330 by Suwa Tokishige to protect the (Upper) Suwa Shrine and expand his powerbase. However, in 1333 with the collapse of the Kamakura-bakufu and Nitta Yoshisada's invasion of Kamakura, Tokishige committed mass suicide along with the Hōjō Clan at Tōshōji.

In 1474 the Suwa Conflict - between the Sōryō-ke (Head of the Clan) and the Ôhōri-ke (Religious Patriarchs) - enveloped Suwa and Ogasawara Sadamasa, nominal ruler of Shinano, had Takeijō fortified, using the castle to help defend his supporters at Takato Castle where the Ôhōri had fled to. Takeijō was re-fortified and garrisoned in opposition to Hisawajō which was situated on the otherside of the Maemiya Shrine Complex. Hisawa Castle had already been captured by pro-Sōryō forces after the Ôhōri's assassination of their leaders. The two castle sites are very close and the stand-off must've been intense. The conflict ended in 1483 with the defeat in battle of Kanasashi Okiharu of the Lower Shrine (the Sōryō-ke re-attained the position of Ôhōri).

In 1535 Takeda Nobutora made a truce with Suwa Yorishige and Yorishige took Nobutora's daughter as his wife, cementing their relations. However, in 1542, the new leader of the Takeda, Takeda Shingen, invaded Suwa and besieged the Suwa's castles, including Takeijō. Suwa Yorishige was defeated and obliged to fall on his sword. Shingen married his daughter and produced his heir, Katsuyori, the intended future ruler of all Takeda domains, including Suwa.

Takeda Katsuyori was defeated by a coalition between Oda Nobunaga and Tokugawa Ieyasu in 1582. Suwa Yoridaka, Yorishige's cousin who had succeeded Yorishige's brother, Yoritaka, as Ôhōri, then allied the clan with Tokugawa Ieyasu who would eventually reinstate Yoritada as ruler of his ancestral lands in 1601. With the dawn of the new era, a backward mountaintop castle like Takeijō was no longer needed and it was abandoned when Yoritada built Takashima Castle as his new base.

Takeijō is an interesting and fairly well maintained yamajiro (mountain castle) ruin. It consists essentially of a terraced mountain ridge with stair-like minor baileys running up to the main bailey at the top. Toward the bottom of the ruin are what look like gate ruins and trench works. The Ôte (main approach) is sunk into the ridgeside. At the base of the mountain is the Jinchōkan Moriya Historical Museum which features quaint architecture by Fujimori Terunobu.

Retrieved from "http://jcastle.info/smw2021/index.php?title=Suwa_Takei_Castle&oldid=34992"
Category:
This page was last edited on 2 May 2020, at 10:04.
Content is available under Creative Commons Attribution-NonCommercial-ShareAlike unless otherwise noted.
About Jcastle.info
Contact Jcastle.info